Entry-level smartphones are still quite popular among Filipinos. According to a research by Counterpoint published last December, budget devices comprise two-thirds of the overall smartphone market.

That is why, it is not surprising this category is just as competitive as the others. More and more products are poured in this price range, giving people lots of options to choose from.

Huawei is no exception. The brand recently released the Huawei Y6s, an entry-level smartphone that aims to offer the masses a bunch of features for a low price.

The looks and specs are quite similar to its predecessor. Both smartphones have a 6.09-inch display, a dewdrop notch, 3GB of RAM, and 13-megapixel rear camera setup. However, it’s great that Huawei opted to include major changes when it comes to the processor and the internal storage. Another added point is the fact that the Huawei Y6s has a fingerprint scanner at the back.

In this review, we’ll see if this smartphone can perform well in this highly-competitive price category.

The new Huawei Y6s looks and feels nearly the same as its predecessor, the Huawei Y6 Pro 2019. It’s not something we’re surprised given that this phone is expected to give incremental updates to its older sibling. 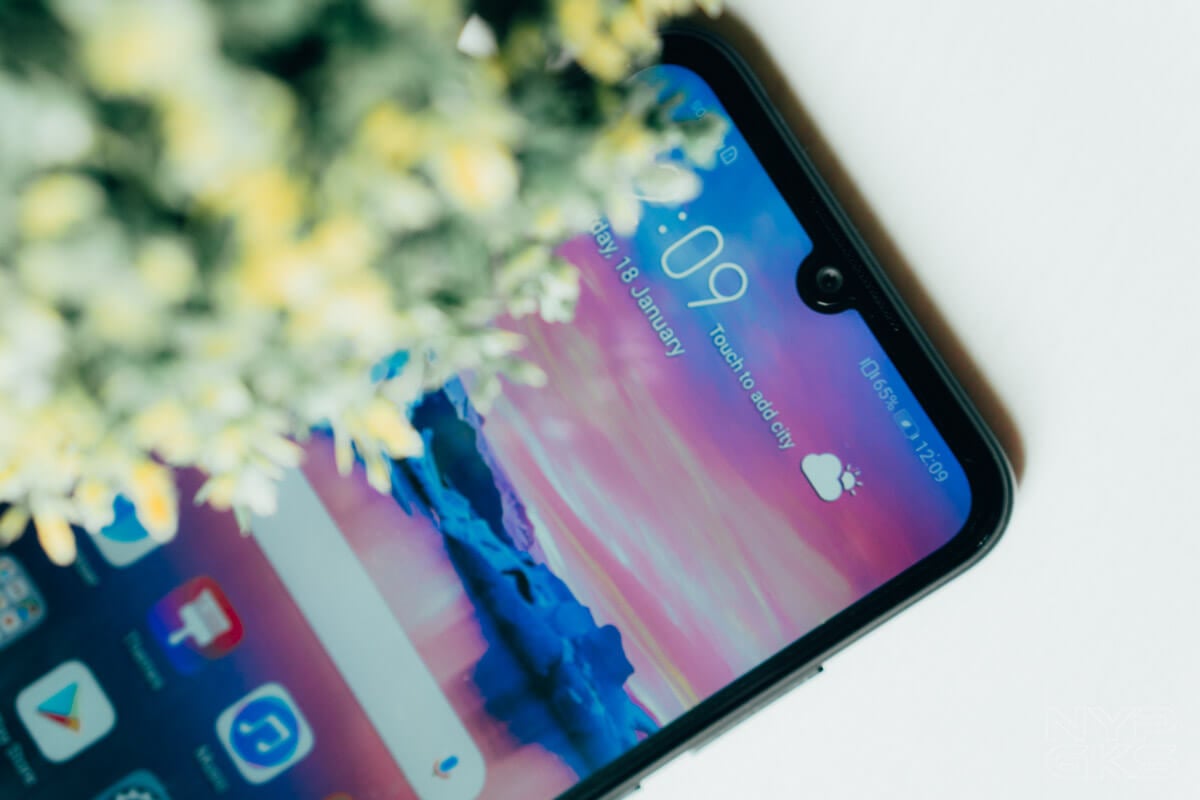 The device comes in two colors — blue and black. The blue variant has dual-textured back while the black one has a simple and minimalist sparkly design at the back.

Upfront is the phone’s front camera placed in a small notch located in the upper-middle part of the device. When watching videos in full screen, the notch is not intrusive at all. 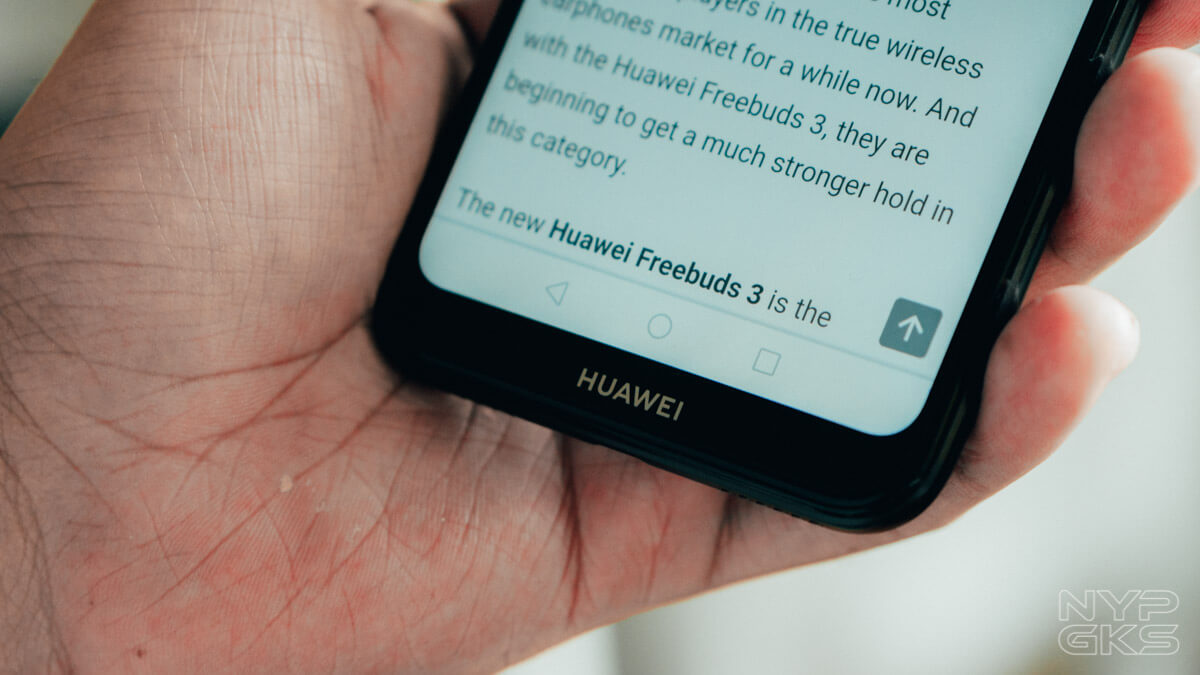 Sadly, Huawei has kept a noticeable bezel at the bottom part of the phone where the brand’s logo is placed. We’re definitely not a fan of the huge bezel and the unnecessary branding, so we hope Huawei would consider removing this even in their entry-level phones.

At the back is the fingerprint sensor placed appropriately where you can easily touch it. For the price, it’s great that Huawei has this feature. It also has Face ID. 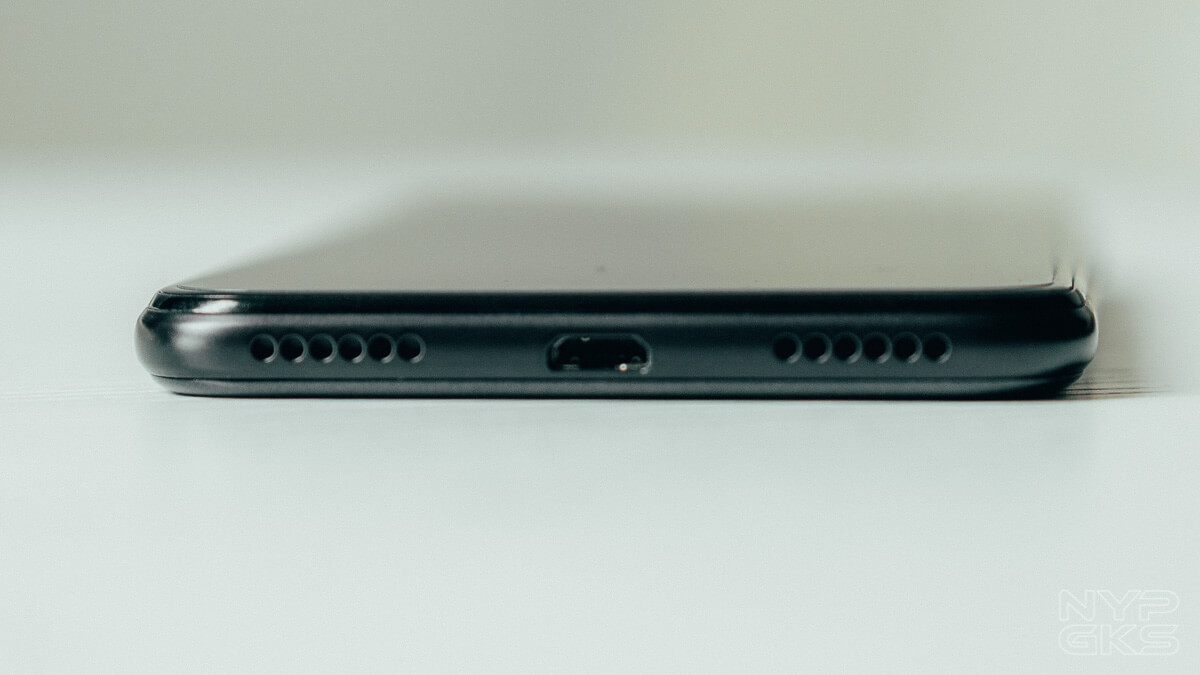 Both the power and volume buttons are placed at the right side of the phone. On the left is a triple-slot SIM card tray. It also has a 3.5mm headphone jack and noise-canceling microphone at the bottom.

For entry-level smartphones, display is probably the least priority. In order for smartphone brands to provide an affordable price tag, cutting down on the display quality is the most logical thing to do. This is also the case with Huawei Y6s. 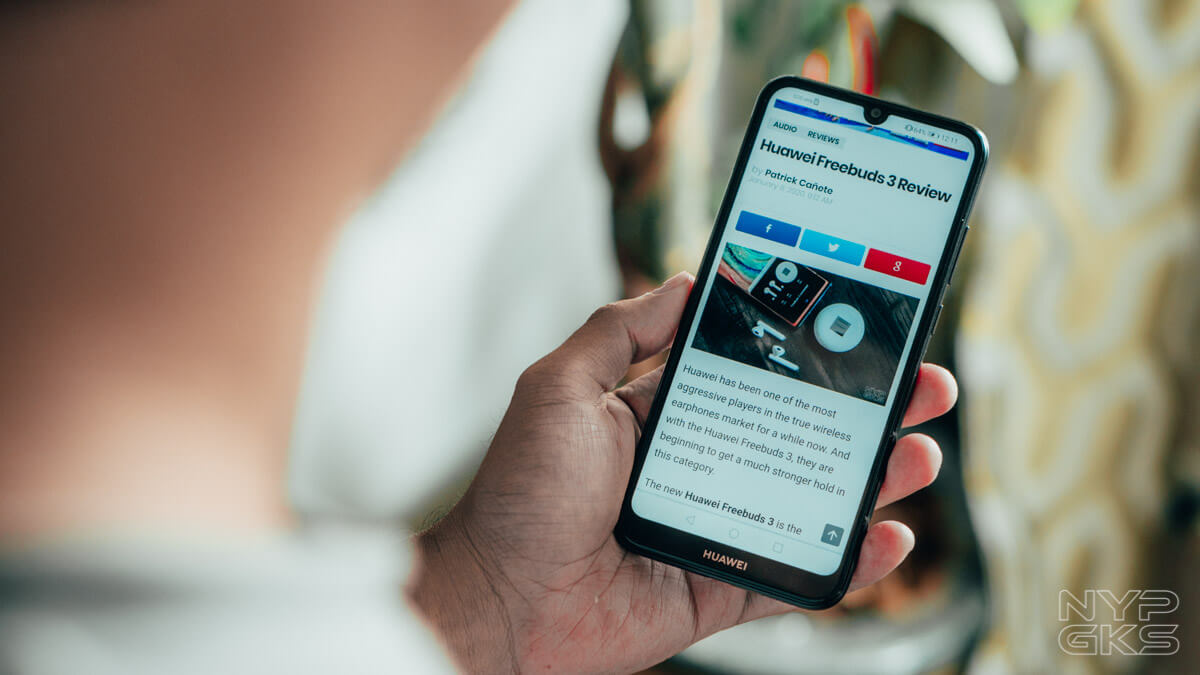 It’s smaller compared to other devices in this price range. The Huawei Y6s is great for those who want a handy and compact smartphone, but consumers better skip this one if they prefer a large phone.

The screen works perfectly fine for daily messaging and social media use.  It’s clear and crisp despite the colors having too much contrast. In fact, the yellows and greens are quite evident especially when watching videos. Then again, nothing to expect from a smartphone of this price.

The Huawei Y6s uses a MediaTek Helio P35 octa-core processor with 3GB RAM and 64GB internal storage expandable up to 512GB via microSD.

The phone performed similarly (or even better) compared to other devices in this price point. Huawei Y6s can handle multitasking despite some noticeable hiccups from time to time. In addition, it struggles when using resource extensive apps but it’s quite understandable because it’s from the budget segment.

But the good thing is the phone did not experience any overheating issues. Even when playing games like Mobile Legends, PUBG, and Call of Duty Mobile, it handles it really well.

Here are the benchmark results from the tests we ran on the Huawei Y6s. 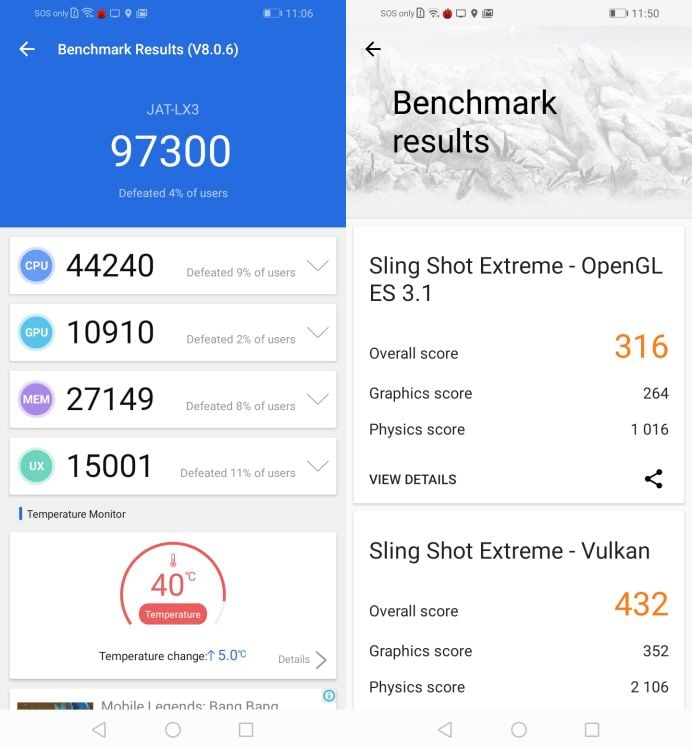 One notable upgrade with the Huawei Y6s is the inclusion of the fingerprint scanner at the back. It’s placed at the middle which the finger can easily reach when picking up the phone. 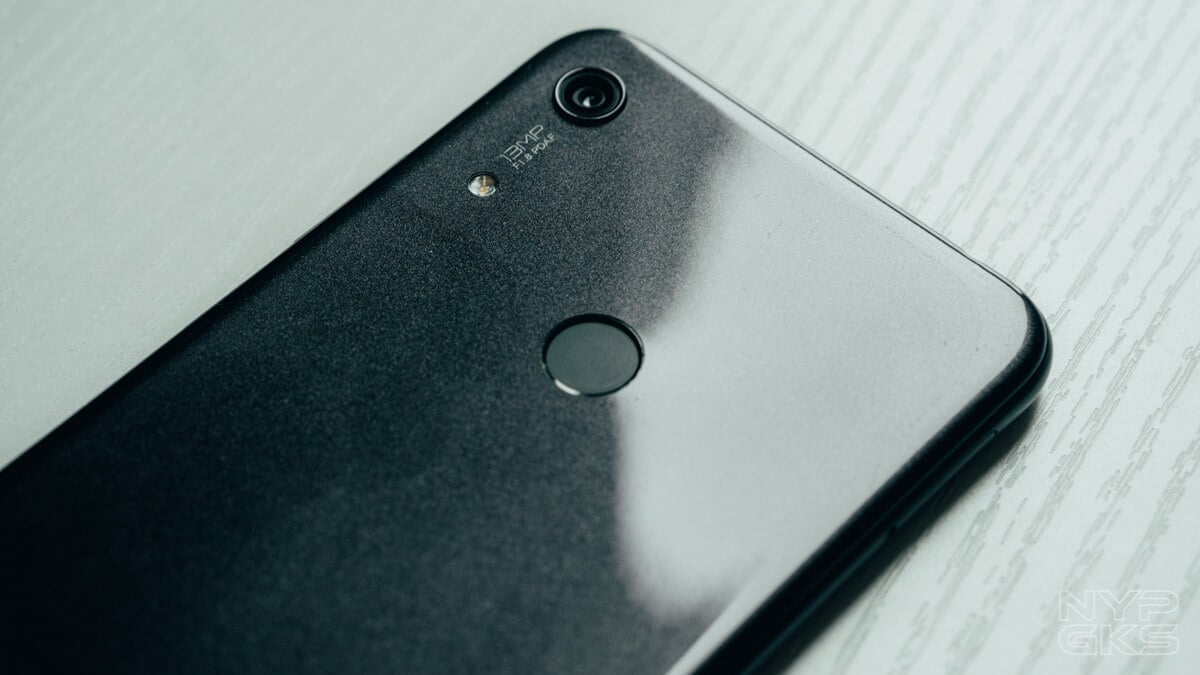 In addition, it also has face ID that unlocks the phone in a pretty impressive manner. It can detect a person’s face even though it is in a dark environment.

When it comes to the camera, the Huawei Y6s delivers what is only expected. We somehow wished they could have done more for this one.

Considering that other brands have opted for a dual-camera setup even for budget smartphones, it is underwhelming that Huawei still used a single 13-megapixel rear camera that comes with an f/1.8 aperture lens.

In terms of quality, the rear camera can take decent photos in daylight or in good lighting condition. The photos are noticeably washed-out and lack contrast. However, it can be easily fixed by using third-party applications or filters. Unfortunately, the camera kinda struggles badly at night unlike its high-end siblings. But that’s to be expected since this is a low-end phone.

In addition, Huawei Y6s has an 8-megapixel front shooter. The photos taken are clear and crisp and there are also various filters that can be used. 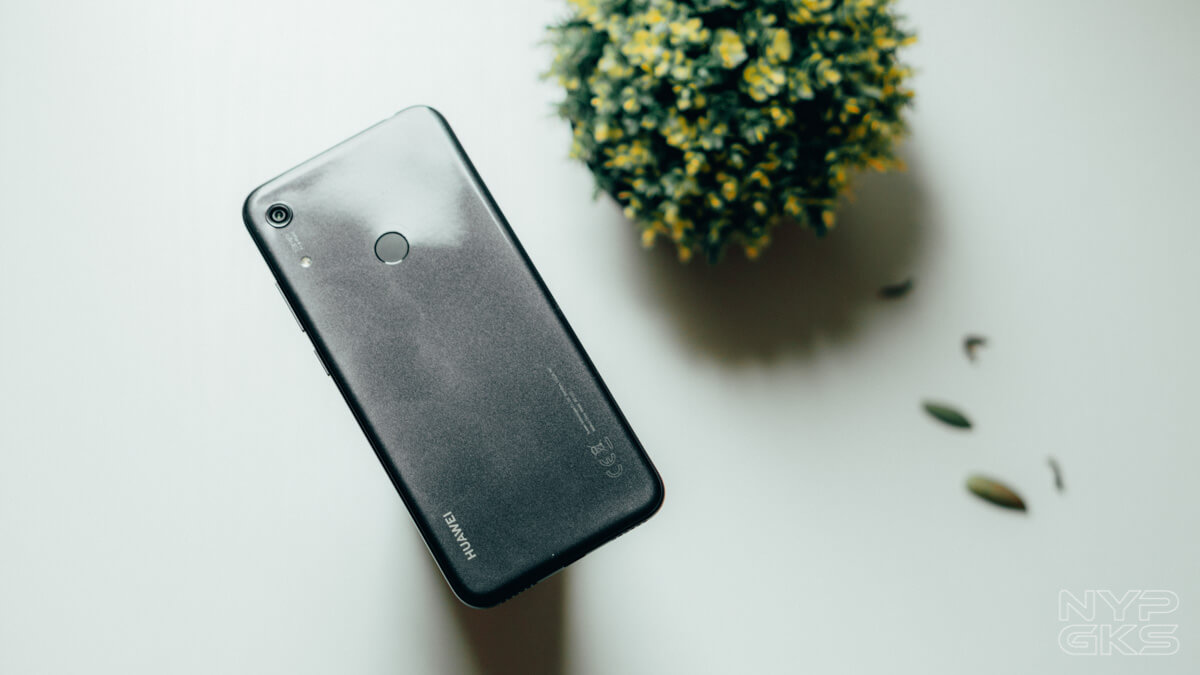 The Huawei Y6s comes with a decent 3,020 mAh non-removable battery. Fortunately, the battery can last us for a day of light to medium use. This includes occassional text messages and calls throughout the day, checking social media, and surfing the web every once in a while. Wi-Fi is always turned on and I also listened to music using a true wireless earbuds for several hours.

There’s no fast charging available, so it’s not surprising that it takes at least 1 hour and 30 minutes to fill up the battery from zero. 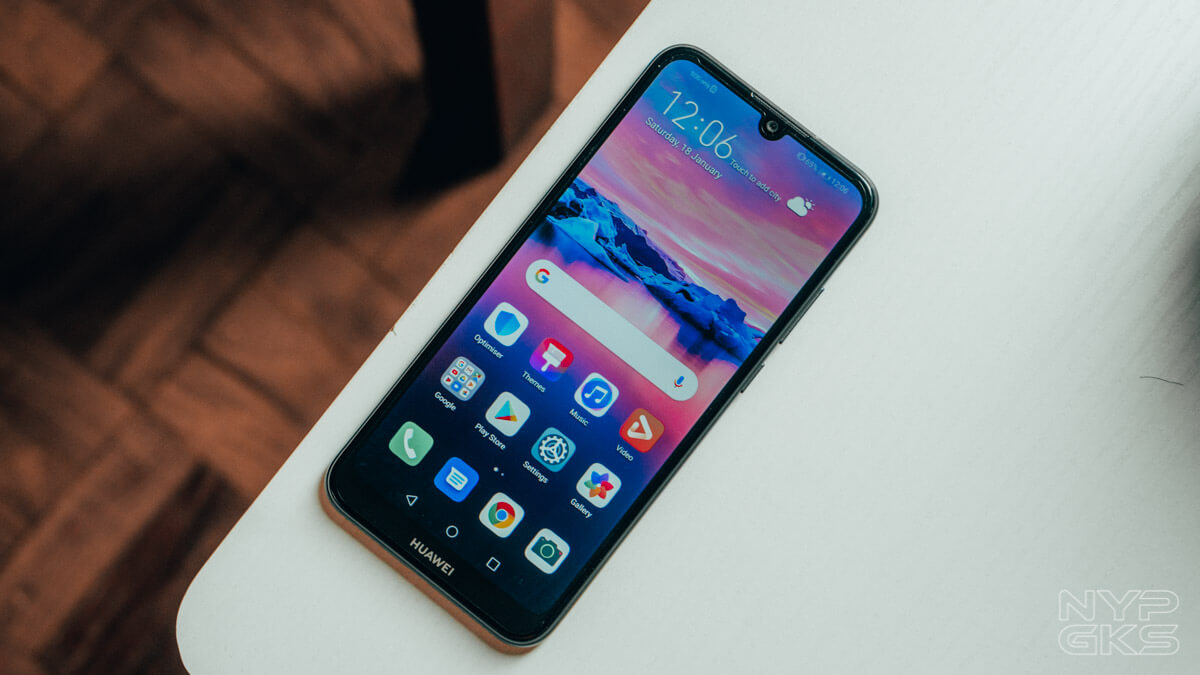 While it’s certainly not the best performer we’ve seen, Huawei Y6s still impressed us with what it has to offer. For an affortdable price of Php6,990, there’s a lot to like about it.

The screen and body is not as gigantic as other competing devices which makes it easier to hold. It’s not too thick either, although the inevitable trade-off is its relatively small battery capacity. Performance is good enough for most use cases and it can play games, too. Cameras are pretty decent as well and a software update can easily some of its issues.

Huawei Y6s is currently available in the Philippines for a price of Php6,990.