Completing the list of newly announced MyPhone handsets are the Myphone my73 and my77 DTV.

While the my95 DTV and my96 DTV offer good specs for its price, some may find it a bit too much for them. For those looking for something more affordable, these two are decent options.

For starters, the MyPhone my73 has a 5-inch screen and quad-core chipset. It’s as entry-level as it gets, offering only 512MB of RAM and a measly 4GB of storage. 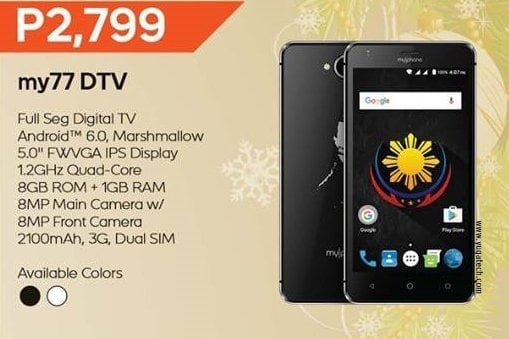 Meanwhile, the Myphone my77 is slightly upgraded – 1GB of RAM and 8GB of storage. It also has a more capable set of cameras, having 8-megapixel shooters on both sides.

Both handsets feature a digital TV tuner built-in so you can watch your favorite TV wherever you are. Well, as long as there’s signal.

If we’re going to pick between, we would get the MyPhone my77 DTV simply because of the double the RAM and storage.