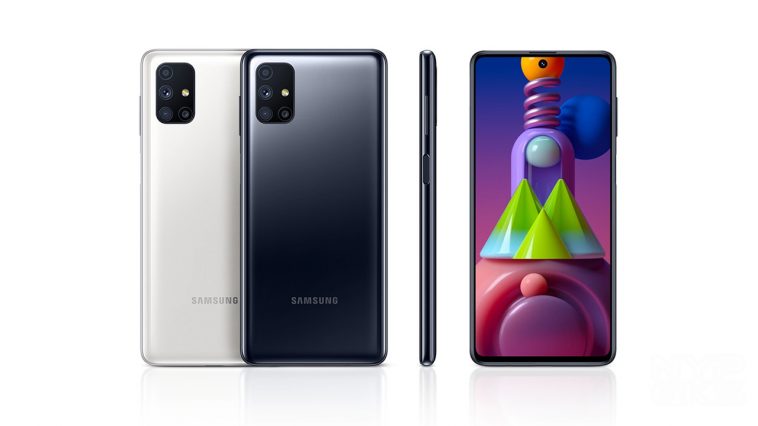 The Samsung Galaxy M51 makes a subtle launch in Germany as one of the biggest-battery smartphones in the market today.

With the Samsung Galaxy M51, you’re getting a large 7,000mAh battery. This should easily last you for two days or more with light to moderate usage. Albeit, it only has a 25W fast charging. It’s then powered by a Qualcomm Snapdragon 730 processor with 6GB of RAM and 128GB of expandable storage.

It also has a tall 6.7-inch FHD+ Super AMOLED screen, with the familiar notch on the middle for the 32-megapixel selfie camera. Samsung is yet to reveal its exact dimensions, but with its large battery and screen, expect it to be quite thick and bulky.

Just like the Galaxy M31 and its siblings, the Samsung Galaxy M51 has a clean back design. It’s not clear what makes up for this glossy look, but we expect it’s still plastic. You can get it in Black and White.

We also have the L-shaped camera here that was borrowed on the Galaxy A71. It consists of the usual suspects — a 64-megapixel main camera, 12-megapixel ultra-wide, 5-megapixel macro, and 5-megapixel depth sensor.

The Samsung Galaxy M51 is now up for pre-order in Germany with a price of EUR360 (around Php20,800) and will ship on September 11. Its global release in markets like the Philippines is yet to be announced.