JBL is a well-established brand when it comes to high quality audio equipment, but more for their speakers than anything else. Still, they know good audio, so it shouldn’t come as a surprise if their expertise translated well to the JBL J55 headphones that I was recently given the opportunity to review. And it’s not like JBL hasn’t been making headphones for years.

The JBL J55 is an attractive pair of professional headphones geared toward the casual audiophile who wants a bit of style to go with their substance. The JBL J55 tries to position itself as just that, featuring large 40mm drivers for superior sound, simple yet eye-catching design, and solid construction.

The review unit I got was the white/gray color variant, but it also comes in white/orange and black variants. The JBL J55 is mostly matte plastic, with the extendable part of the headband and some ear-cup accents being the only parts you’ll find brushed stainless steel. It’s solidly built, if unapologetically plastic (thank you Apple for that awesome line). 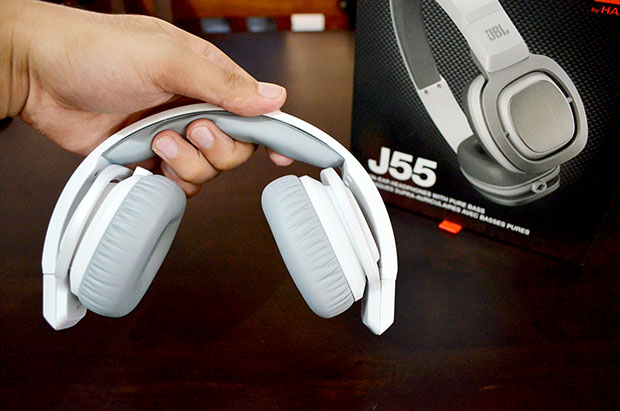 The JBL J55 features leather cushions on the ear-cups and the band. The material is very durable and won’t tear under normal stress. It provides a great acoustic seal too. The ear-cups are large enough to completely engulf my ears, but a bit of sound does leak through, and the leather material of the cushions helps to keep the sound from leaking out. Also, the ear-cups pivot 180 degrees for easier storage. It’s not like it becomes super compact or anything, but at least it’s easier to stash in its padded carrying pouch. 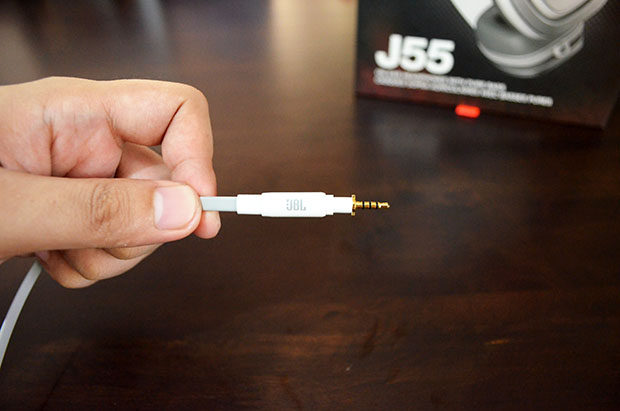 It comes with a single flat detachable cable that attaches to the left ear-cup. Coming from the most tangle-prone headset in existence (HTC UrBeats), I love that the JBL J55’s cable is almost tangle-proof and easy to unravel when needed. It also helps determine which side of the J55 is right or left. The cable features a unique locking mechanism. Unlike other headphones where the cable might come off if someone where to yank on it, the J55’s cable attaches securely with a quick twist.

If there’s anything I don’t like about the J55, it’s that you won’t find a spare cable through third parties if you lose yours. One end is the standard 3.5mm jack, but the end that plugs into the ear-cup is a 2.5mm jack and features the twist-lock mechanism so you’re definitely going to have to go back to JBL to get a replacement.

Of course, where it really matters is the sound quality, and the JBL J55 doesn’t disappoint. I tested it on a range of genres, particularly hip-hop, RnB, Jazz, and Alternative Rock. I also played a few hours of Fallout 3 while wearing these cans.

The large 40mm drivers deliver balanced sound all throughout, especially in the mids and lows, allowing the JBL J55 to perform well on a wide range of music genres. The midrange is where the J55 excels although the bass is still decent. It’s not particularly head-thumping, but it should suffice for most people. If head-thumping bass is what you’re after though, you should consider something with larger 50mm drivers perhaps. 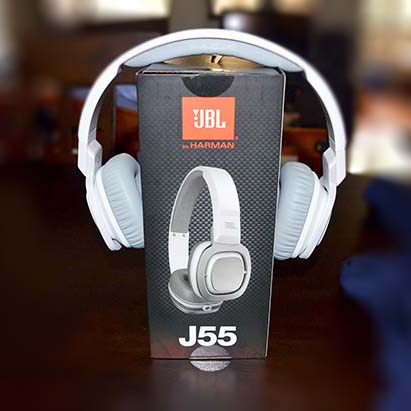 I especially had a blast with the JBL J55 while I was playing Fallout 3. It isn’t a particularly scary game, but there are a few times where it can get tense and the ambient music and environment noise plays a large part in that. There were times when I was exploring an area of the game and looking out for an enemy to jump out at me at any given me, and I was wired tight because of the great feeling of immersion that the JBL J55 delivered. 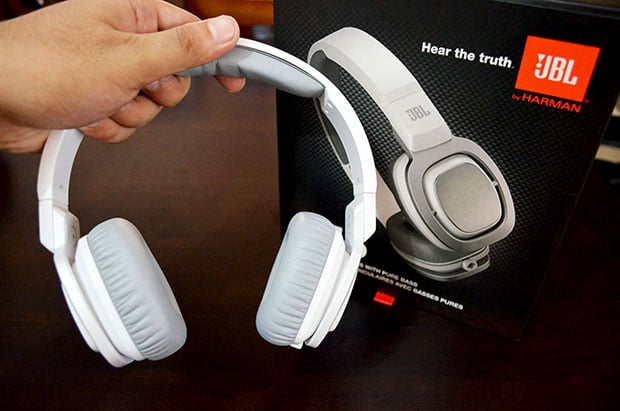 If there’s anything I don’t like about the J55, it’s that the highs fall a bit short. It’s not at all muddy, but it’s just not as clear as I would like. Sure, clarity in that range can get head-grating, but there’s something about the clearness of a pin dropping that really excites me more than hearing thumping bass. Also, there’s no volume control. If that’s a deal-breaker for you, the J55i comes with a wired mic and volume controls, but it would have been nice if there was at least a built in volume rocker on the J55.

With the JBL J55, you get what you pay for and a bit more. The headphones themselves have a simple yet flashy design and the build quality is excellent even with the dominant use of plastic. If you’re looking for head-rattling bass, look elsewhere, but otherwise, the JBL J55 performs well across a wide range of genres. Also, the tangle-free twist-to-lock cable and padded carrying pouch are a nice touch as well. Looking to pick one up for yourself? You can grab the JBL J55 for Php4,290.