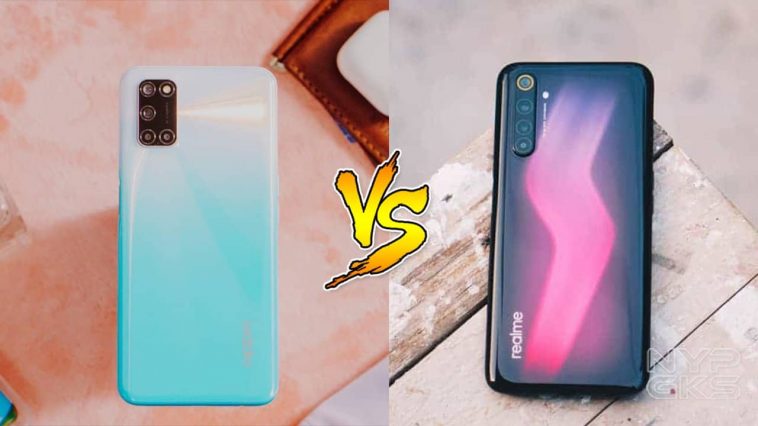 Midrange phones are some of the most popular products in the local tech scene. So today, we’ll be comparing two of the latest devices in this price category to help you decide which one to get.

One of the latest ones is the OPPO A92. It is complete with features for people who want a daily driver smartphone that’s also great for multimedia consumption.

But obviously, it is not your only option for the price. A few weeks before the A92 came out, the Realme 6 Pro was also brought to the country.

Placed in the sub-Php16,000 price range, Realme’s latest also packs a lot of features that makes it a great option for the price.

So, here in our OPPO A92 versus Realme 6 Pro specifications and features comparison, we’ll see which between the two is worth your time and money. Let’s start!

The designs for both the OPPO A92 and Realme 6 Pro are for two different people.

If you want a cleaner and more elegant look, go with the OPPO A92. It’s available in Twilight Black, and the unit we got, the Shinning White. It sports a refreshingly clean look with hints of aquamarine color.

However, the back panel only uses a glass-like material, while the glass used on the front was not mentioned.

But if you want something more flashy to show off with friends, the Realme 6 Pro might suite you better. It comes with a lightning design on the back that reflects with light. You can get it in Lightning Blue and Lightning Red.

It also uses a sturdier Corning Gorilla Glass 5 on the front and an unspecified glass material on the back.

Both devices uses a punch-hole on the screen for their selfie cameras. But since the Realme devices have two front-facing cameras, it has a wider punch hole, which can be a bit distracting for some people.

Here’s an obvious win for the Realme 6 Pro. One of its biggest highlights is the 90Hz refresh rate, which is rare on smartphones at this price. It makes the games, and the interface in general, smoother and faster.

To the A92’s credit, it does have a TUV Rheinland Eye protection for those people who look at their phones a lot of times.

Still, the Realme 6 Pro’s fast and smooth refresh rate already gives it a big edge over the A92.

One of the biggest weaknesses of the OPPO A92 is its outdated processor. It was capable enough in our test, but the Qualcomm Snapdragon 665 octa-core processor still fails to compete in other devices in this price range. That’s depite its 8GB of RAM and 128GB of expandable storage.

On the other hand, the Realme 6 Pro uses the latest Qualcomm Snapdragon 720 octa-core processor. Other than beating the A92 in performance, it also brings the newer Bluetooth 5.1 standard to the device. That’s with the same 8GB of RAM and 128GB of expandable storage.

Between the two, the Realme 6 Pro offers better performance with its newer and more capable processor and fast 90Hz refresh rate screen.

Both the OPPO A92 and Realme 6 Pro comes with 16-megapixel selfie cameras. But where the latter shines is in its secondary 8-megapixel ultra-wide front camera, which is great for group selfies with friends and family.

The Realme device also took the cake in the rear camera battle. It sports a 64-megapixel main shooter, while the competition only have 48-megapixel sensor. Realme also rigged it with a 12-megapixel telephoto lens, with a 2x optical zoom that’s great for portraits, and a 2-megapixel macro camera.

On the other hand, the OPPO A92 settles for a 2-megapixel depth sensor and 2-megapixel monochrome. However, both devices do have 8-megapixel ultra-wide shooters on the back.

Both devices also have software video stabilization, which worked really well in our testing. But bottomline is, the Realme 6 Pro obviously won this round.

The OPPO A92 overtakes the Realme 6 Pro in the battery department. This thing has a 5,000mAh capacity, which is obviously larger than the 4,300mAh of the competition. Expect longer battery life out of this, since it also lacks a battery-hungry 90Hz screen.

It may have a shorter battery life, but the Realme 6 Pro compensates by having a faster 30W flash charge. Meanwhile, the A92 is almost half slower at 18W.

So, if you’re living a busy life and want a smartphone that can stay up with your long busy day, then the OPPO A92 might serve you better.

As stated earlier, the OPPO A92 was created for multimedia junkies who binge-watch on Netflix and YouTube all the time. Hence, OPPO rigged it with a stereo speaker setup. And in our full review, we liked how it provided good stereo separation that’s also great for shooter games like Call of Duty Mobile.

The Realme 6 Pro only has a single speaker but makes up for it by having a loud volume and audible bass.

Being midrange devices, there are not a lot of extra features found on both devices. Although, it’s worth mentioning that the Realme 6 Pro do have a splash-resistant coating and the newer Bluetooth 5.1

Well, I guess we have an obvious winner. The Realme 6 Pro’s faster screen, newer and more powerful processor, flexible cameras, and fast charging allowed it to easily win this battle against the Realme 6 Pro. You can learn more about it in our full review.

With a price of Php16,990, it costs php1,000 higher than the OPPO A92, which retails for Php15,990. But considering all the better features you’re getting, the price premium is totally worth it.