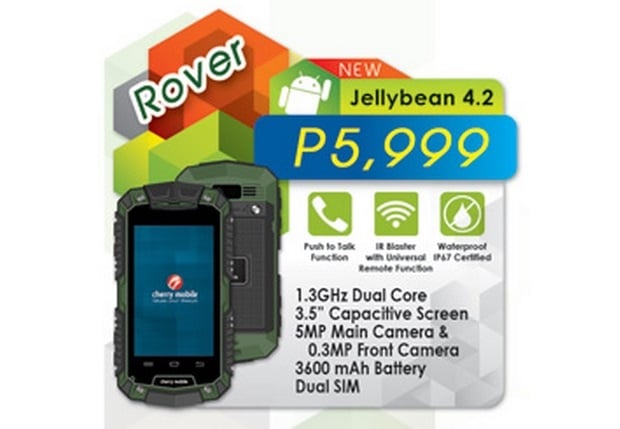 One of the new devices that Cherry Mobile will be releasing soon won’t be like any of your typical smartphone. The Cherry Mobile Rover is a ruggedized Android smartphone, specifically an IP67-certified waterproof handset for Php5,999.

With an IP67 certification, the Cherry Mobile Rover has complete protection against dust and can be submerged up to 1 meter for 30 minutes. Based on its appearance, the phone may also be designed to resist damage when dropped, but we can’t sure on that one until we hear an official announcement from Cherry Mobile.

As for the other specs, the Cherry Mobile Rover (which is similarly priced to the Omega Aeon) is an Android 4.2 Jelly Bean smartphone with a 3.5-inch capacitive screen and 1.3GHz dual core processor. It’s got a 5-megapixel main camera, paired by a 0.3-megapixel (VGA) shooter in front. Besides being dual SIM capable, the Rover is also useful as universal remote controller via its IR blaster. Battery capacity is more than enough at 3600mAh.

You can see more new releases by Cherry Mobile at their most recent price list below (source link).