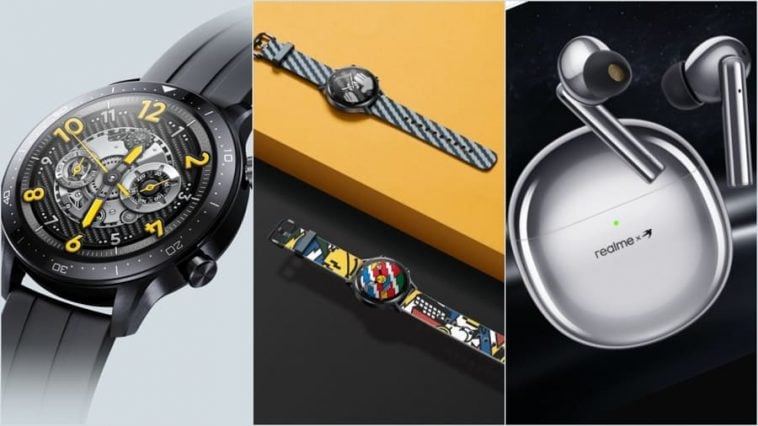 The original Realme Watch has come along way, despite being only a couple of months old. With the Realme Watch S Pro, you are now getting a 1.39-inch AMOLED panel — a great screen to have an always-on feature with. It has a 454 x 454 pixel resolution, sensors for auto-brightness adjustment, and an option from more than 100 watch faces.

Under the hood, it’s powered by an unnamed ARM Cortex-M4 processor. Much like the latest Apple Watch and other smartwatches, it has a SpO2 sensor to measure oxygen levels. It also has a heart-rate sensor, dual-satellite GPS, and 5ATM water resistance, which helps track up to 15 sports mode, even swimming.

The Watch S Pro is wrapped on a SUS316L stainless steel body that weighs 63.5 grams. It comes in silicone and vegan leather options: Green, Brown, Blue, and the one included in the box, Black.

Realme claims that the Watch S Pro can lasts for up to two weeks with its 420mAh battery.

Next stop, we have the Realme Watch S Master Edition, which is designed by artist Gafflex. This thing is pretty much the same as the Watch S that we saw last November.

The Realme Watch S Master Edition retails for INR5,999 (around Php3,900). Both new smartwatches are compatible with the new Orange, Blue, and Green silicone straps, which will retail for INR499 (around Php300).

Realme collaborator Jose Levy comes back from designing the Buds Q to the latest Realme Buds Air Pro Master Edition. It has the same set of features as the regular Buds Air Pro. But now, it has a mirror design called New Wave Silver.