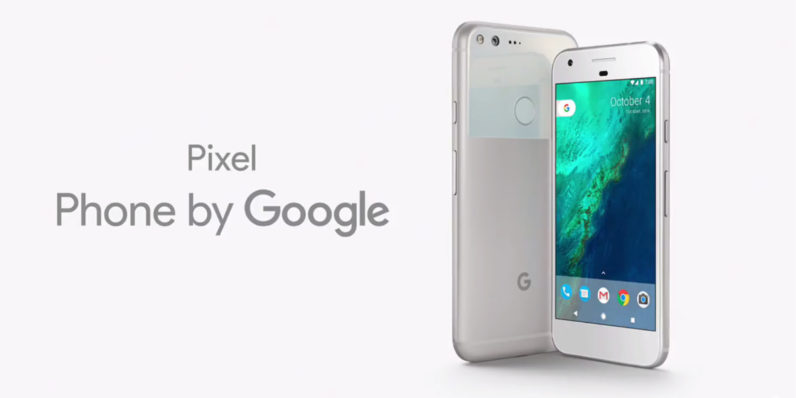 At its hardware launch event happening in San Francisco, the tech giant officially took the wraps off of the ‘phone by Google’ – the Pixel smartphone.

The Pixel has been leaked multiple times before its launch, so we pretty much have an idea of what it has to offer. It’s built and assembled by HTC, through the specifications of Google. It has an aluminum case with glass cover, fingerprint scanner (now Pixel Imprint), and Google logo on the rear.

Aside from the regular Pixel, there’s also a Pixel XL. As the name suggests, it’s a bigger variant of the Pixel. The most notable difference between the two is its screen size and resolution. Both of them are AMOLED but the Pixel has a 5-inch 1080p display while the Pixel XL is slightly larger at 5.5-inch QHD. Other than that, they’re very similar to each other.

Google Pixel is powered by the latest Qualcomm Snapdragon 821 processor and it runs on a ‘specialized’ version of Android. In terms of camera, the Pixel features a 12.3-megapixel rear shooter with an aperture of f/2.0 and 1.55 micron pixels sensor and 8-megapixel camera in front. There’s 4GB of RAM and either 32GB or 128GB of internal storage. Of course, given the larger body of the Pixel XL, there’s more room for battery. It has a 3,450mAh battery while the Pixel has 2,770mAh. Other features include Bluetooth v4.2, USB Type-C, and 3.5mm headphone jack.

It will also be the first handset to ship with Google Assistant, which can be activated by pressing and holding the home button. It’s like Apple’s Siri on steroids. Google Assistant also integrates with the current Now on Tap feature introduced in Android Marshmallow. This allows the assistant to pull up data like restaurant information, movies, and reviews for the recognized word on the screen. The Assistant is smart enough to take restaurant reservatios just by using voice prompts.

Google claims that the Pixel and Pixel XL has the “the shortest capture time on any mobile camera ever.” The cameras also scored a staggering 89 points, the highest rating on a phone ever. For comparison, the iPhone 7 scored 86 on the same test.

Another benefit of having the Pixel is the free unlimited Google storage for photos and videos. It’s like Google Photos but without the limits in resolution. Even videos shot in 4k will be uploaded at full resolution, for free.

Both smartphones support fast charging and leaving it on charger for 15 minutes will result to 7 hours of battery life.

Running into problems with the Pixel? There’s a 24/7 dedicated phone support to help anyone out.

The Google Pixel smartphones are also the first Daydream-compatible handsets. Google has also announced the availability of the $79 Daydream View headset for the VR support. Pixel and Pixel XL will be available in Quite Black, Really Blue, and Very Silver colors.