O+ USA has announced a new flagship smartphone after a long while – the O+ Compact Pro.

Before reading the rest of what is has to offer, I’d like to give a quick reminder. If you’re after the best price-to-specs ratio handset, stop reading and look somewhere else. That’s not O+’s game, and it seems like they’re continuing it right now. To be fair, they’ve always boasted about being more sturdy than its competition and they really are – to some extent.

The O+ Compact Pro has a 5.5-inch 1080p IPS scratch resistant screen in front with a 5-megapixel selfie shooter at the top. All the buttons are located on the right side, while the other are pretty bare except for the headphone jack at the top. There’s also no home button in sight, as it utilizes on-screen buttons for operations. The build is made of plastic, with probably the same feel to other more affordable O+ smartphones like the Ultra 3.0.

Since it’s a flagship, we expect it to come with top-notch specs. But it doesn’t. It’s powered by an unspecified octa-core processor clocked at 1.3GHz each and a measly 2GB of RAM. You read that right – not 3GB, not 4GB, but 2GB. In terms of storage, it’s a little buffed, having a total of 80GB – 16GB of internal plus an additional FREE 64GB SanDisk microSD card. 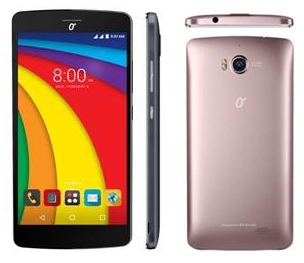 Perhaps computing power isn’t really a concern for the brand. The O+ Compact Pro has a ” professional camera performance” with the help of its “dual Ultra HD” camera. On my first look, I thought they equipped the device with a dual-camera setup, but I was wrong. They are actually talking about the cameras both in the front and back. The rear shooter is a 13-megapixel sensor with Back Side Illumination, f/2.0 aperture, and dual LED flash. The company claims that you can get “DSLR-quality photos” with the handset. Whether that’s true or not, we will just reserve judgment until our review.

As usual, it will come with loads of O+ USA’s custom proprietary software features such as peace to selfie and air gestures. To be honest, there’s not much to like about this phone considering its steep price. But if it helps, the company is also throwing in a pair of FREE JBL earphones in the package.

There’s two color options: titanium and rose gold. Another important thing to note is that it’s quite bulky, even though its battery capacity is not that large. On paper, I’m quite underwhelmed as I expected more from the brand. Nevertheless, we’re going to try it out and let you know what we think about it.

O+ Compact Pro is priced at Php11,395 and it will be available on all O+ stores, kiosks, and authorized dealers nationwide.