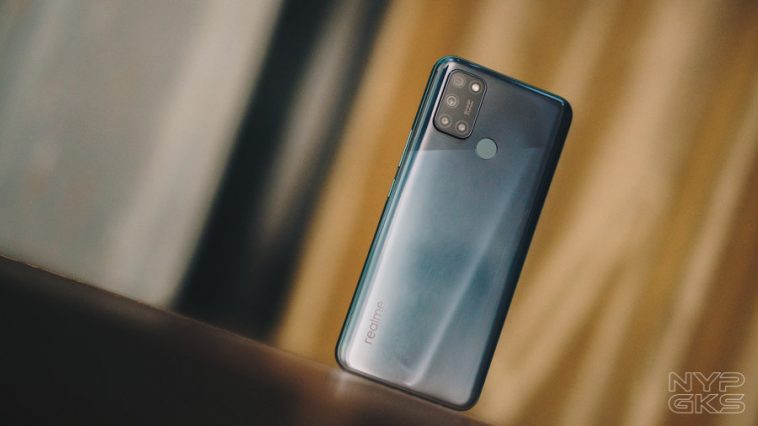 Realme has a cheaper version of its current midrange line. Meet the Realme 7i.

As the name suggests, the 7i is a more affordable alternative to the Realme 7 and 7 Pro. But is it really worth getting? Or should you spend more and get the more expensive models instead? We find out in our Realme 7i review.

Just like most devices in the sub-Php11,000 price range, the Realme 7i is mainly constructed with plastic. However, the company is making up for the second-rate material by being creative with the design.

As you can see, the 7i looks unique from their previous releases and in the smartphone world in general. It has a two-tone design, which is sliced in the rear fingerprint scanner on the top.

It’s available in Polar Blue and the one we have here the Aurora Green. It has a shiny paint job on the first partition, while the rest has a smoky tone that gradients to white. The design is easily one of its biggest strengths.

The front also looks clean. Just like its brothers, the Realme 7i utilizes a punch-hole cutout for the selfie camera. This made the bezels ultra-thin and the overall screen looking clean.

There’s a tiny slit on the top for the earpiece. Sadly, it doesn’t double as a second speaker for a stereo setup.

The top is clean, while on the bottom, we have the headphone jack, USB Type-C (thankfully), and the loudspeaker.

We have the SIM tray on the top left corner, which can house two nano-SIM cards and a dedicated slot for the microSD. While on the other side, we have the volume controls and the lock/power switch.

The physical buttons work fine, but it’s hard to press when compared to other devices we’ve tested.

Besides the unique design, we also have the quad-camera setup on the back inside a rectangular camera glass. There’s also the fingerprint scanner back here.

All in all, we’re satisfied with the Realme 7i’s design. It may be made of plastic, but at least it looks good. There’s a pre-installed screen protector and a free dark clear case on the box for extra protection.

Having a high refresh rate screen has become a buzzword in smartphone marketing. This feature looks really impressive when implemented well, but if not, then the difference would be barely noticeable.

The Realme 7i has a 90Hz 6.5-inch HD+ IPS screen. It’s definitely smoother than the competing handsets that only have a 60Hz screen, but we feel it’s not impressive enough to be your top reason why you’d be getting this device.

It would’ve been better if Realme gave up the 90Hz refresh rate and instead upped the HD+ resolution to a sharper FHD+ panel.

As stated earlier, the Realme 7i lacks a stereo speaker setup. Instead, we’re getting a single loudspeaker on the bottom, which offers decent volume, with audible bass, although it sounds just a tad bit muffled. For a better experience, you might want to get a pair of earphones from Realme, or from anyone else, since it doesn’t come with one.

The Realme 7i also has the company’s Real Sound Technology. It basically optimizes the sound to whatever setting you set it with Movie, Game, Music. Personally, we just set it to Smart and let the device apply the right setting automatically.

The Realme 7i is powered by a 2.0GHz Qualcomm Snapdragon 662 octa-core processor, with an Adreno 8GB of RAM and 128GB of UFS 2.1 expandable storage.

Its large 8GB of RAM surely helps to improve multitasking and app launch times. However, the Snapdragon 662 chip is just not powerful enough to keep up.

You can play top titles like Call of Duty Mobile and PUBG Mobile, but you have to settle with medium settings to get the best possible performance.

Despite being the newer processor, it appears that the Snapdragon 662 is inferior to the Helio G90T from the Realme 6, which has been discounted and matches the price of the Realme 7i.

The Realme 7i runs on the first-gen Android 10-based Realme UI. Since it’s a brand new device, it’ll most definitely receive the upcoming Android 11-based Realme UI 2.0 update.

Its interface looks fairly clean. Swipe up to reveal the app drawer, while on the far left, you can spot the Google search and news.

You can easily enable the Dark Mode in the drop-down menu. Customize the home screen, lock screen, set themes, icon style, and more in the settings.

Smart Driving for a less-distracting interface when you’re on the road. Digital Wellbeing that shows your smartphone habits. A Game Space app is present that optimizes the UI when you’re gaming.

The Google Keyboard is familiar and easy to type on. The camera app is intuitive. There are also a couple of pre-installed apps that are, sadly, cannot be uninstalled. Although, they’re essential apps, so you might actually use them after all.

The Realme 7i has quad rear cameras. It boasts a 64-megapixel main shooter, 8-megapixel ultra-wide, 2-megapixel depth sensor, and 2-megapixel macro. We also have a single 16-megapixel selfie camera on the front.

All three cameras work as they should. The colors and contrast are decent, and the dynamic range is acceptable. But for an extra splash of color, you can enable the Chroma Boost feature.

Although, we’re noticing a couple of inconsistencies with the post-processing, which can be easily fixed with a software update.

Overall, the cameras on the Realme 7i is one of its biggest strengths.

The Realme 7i has a 5,000mAh battery. Partnered with its low-resolution screen and underwhelming processor, it was able to last for two to three days of light usage. If you’re a heavy gamer, watch movies all the time, or use it for home school, then you might have to reach for the charger before the day ends.

Speaking of which, the Realme 7i comes with an 18W fast charger. It can fully charge the phone for about an hour and a half to two hours.

The Realme 7i is a good device for what it is. This thing has a large and smooth display, decent performance, great cameras, and reliable battery life.

But for its price, there are better alternatives out there. One of them is the POCO X3 NFC, which has a better processor and 120Hz screen. Another is the Realme 6, which recently got a price drop. And if you’re coming from the 6i, it’s better to save some money as the upgrade to the 7i is not really worth it.

Realme 7i pricing and availability in the Philippines

The Realme 7i has an official price of Php11,990 in the Philippines. It will be available in Lazada and Shopee on October 22 with a Php1,000 discount. Meanwhile, offline sale will begin on the 24th.