The anticipated Samsung Galaxy Gear is a rumor no longer. Officially launched at a press event in IFA, it’s the first smartwatch in the history of the Korean smartphone giant and the first official contender in what seems to be an endless smartwatch war among dominant smartphone makers.

Before everything else, the Samsung Galaxy Gear is a wearable device that’s jam-packed with both hardware and software features. It’s not a completely stand-alone device, but rather a companion to the smartphone. Users interact with it through a 1.63-inch Super AMOLED touchscreen with 320×320 pixels. Making touch inputs smooth and responsive are an 800MHz processor and 512MB RAM. Android 4.3 is running the software side of things, although the UI seems to borrow a lot from Microsoft’s Windows Phone operating system. Also present are an accelerometer, Bluetooth 4.0, and a 1.9MP camera. A 315mAh battery allows the Gear to keep running for hours. 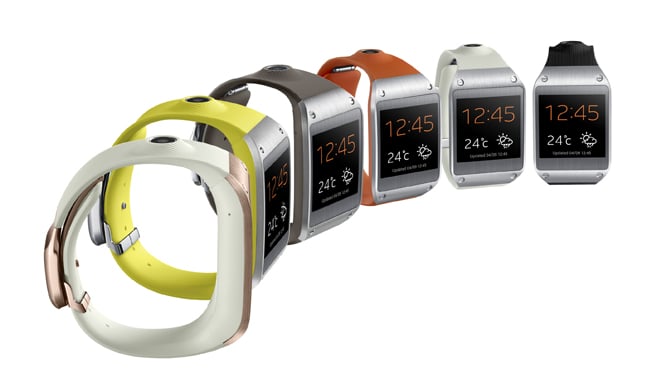 All of these features would make some people think that the Gear is bloated with unorganized mess. However, Samsung has actually gone great lengths to put many things into a small device and still produce a great product. Controls and navigations are easy to learn and simple. Whereas smartphones today are crammed with all things trying to grab the user’s attention, the Samsung Galaxy Gear provides the essential notifications and phone controls—messages, alarms, memos—without too much noise.

Another thing that comes into mind for many is the Samsung Galaxy Gear’s point of existence. In other words, is this really a must-have companion to a smartphone? (Note: It currently works only with the new Galaxy Note 3, but Samsung has confirmed future compatibility with other devices.) Initial reviews of online publications cast the device in a positive light, describing how great and useful it is upon actually wearing it.

The Samsung Galaxy Gear is technically not the first smartwatch. It’s only in recent times, however, that wrist wearable computing has become quite trendy. Other high-profile companies (Apple, Microsoft, Google, and more) are expected to introduce their own smartwatches in the coming months, even though Samsung has already beaten them to the punch.