With the launch of their two new physical stores in the Philippines, Xiaomi wants to strengthen their presence here in the country. Leading the way is the Xiaomi Redmi 5A — the cheapest Xiaomi smartphone right now.

To get everybody’s attention, the company has brought a lot of their value-oriented smartphones here. The products include the Xiaomi Redmi 5A — the #1 best-selling Android smartphone in the world right now.

For its price tag of Php4,390, what does the Redmi 5A offer? We already know that it offers a lot for its asking price, but what else is underneath? Let’s figure that out in our full review.

The Xiaomi Redmi 5A is a low-end, below Php5k smartphone. But despite that, its design and build quality say otherwise. Unlike most other devices you’d see in this price bracket, the Redmi 5A looks well-dressed, refined, and really solid. The Xiaomi Redmi 5A has a metal-looking back. But judging by how it feels and weighs, I suspect that it is just made of plastic and was painted well to look really premium. Also, opting for plastic instead of metal might actually become its strength as it made the device really lightweight.

It also has curved corners and edges, and together with its 5-inch profile, this handset really feels nice and comfortable to hold. It doesn’t feel big, nor too small. Just really ergonomic to use, even for someone who has large hands like me. 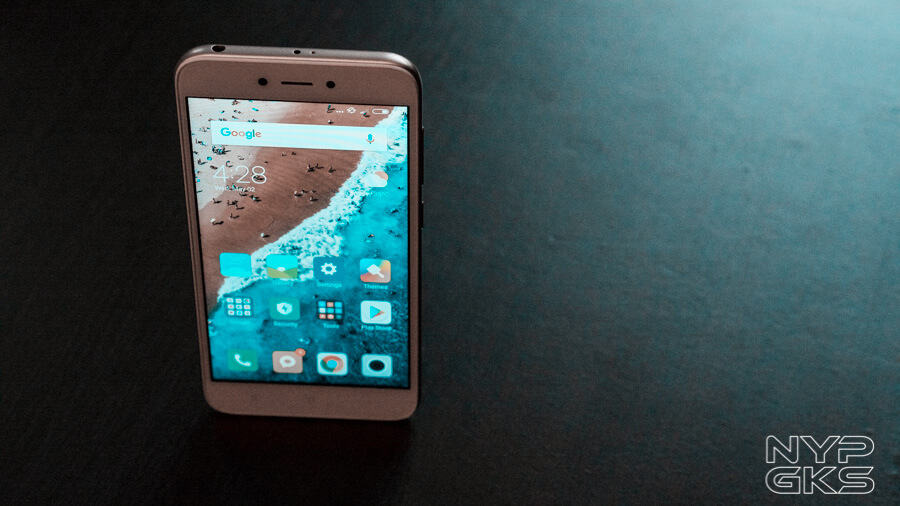 And since this is just a budget smartphone, we will forgive its thick bezels. The Xiaomi Redmi 5A only has the standard 16:9 aspect ratio, which means that you won’t be getting an edge-to-edge screen like other more expensive smartphones. Instead, it has enough room to house all three capacitive buttons at the bottom, and all the hardware and sensors needed at the top.

For a quick tour, we have the volume controls and lock/power switch on the right side. The buttons are thin but still provides good tactility when pressed. They feel well-made and aren’t mushy. 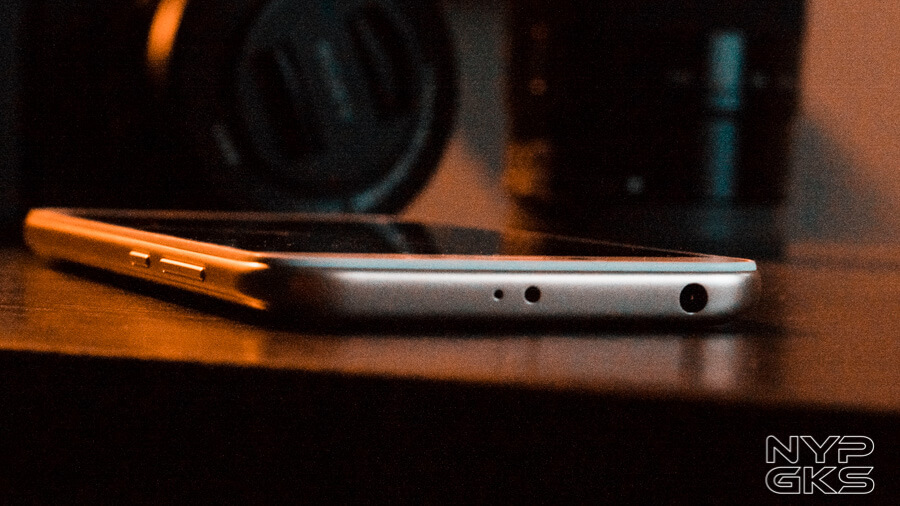 On the left side, we have two SIM trays. The first one on the top houses a single SIM card, while the one below it houses a second SIM and a microSD card (up to 128GB). Most devices use a single tray for all three, but I guess the internal design left Xiaomi with no choice but to have an extra one.

The top of the phone has the 3.5mm headphone jack, a microphone with noise-cancellation, and an IR Blaster. Meanwhile, the bottom houses the primary microphone and a microUSB port. 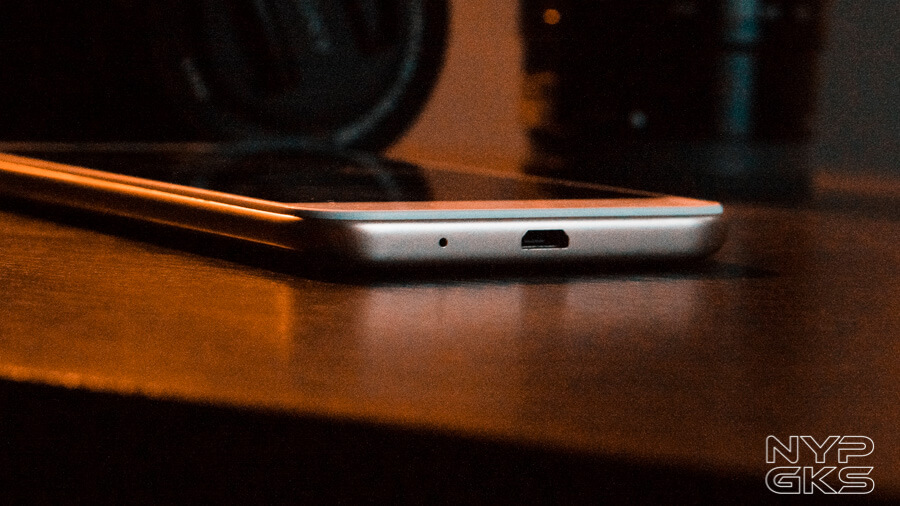 At the back, there’s the 13-megapixel primary camera and an LED flash. At the bottom part, there are the loudspeakers.

The built-in speakers provide decent performance. They produce good volume for private music listening or watching YouTube videos. But they are unsurprisingly weak when fighting other by louder noises. Sound quality is also decent, the treble and bass are well-balanced, but nothing to brag about.

As stated earlier, the Xiaomi Redmi 5A has a 5-inch screen. This IPS display has a 1280 x 720 resolution with a total of ~296ppi. For the price, this is one of the best deals you can get. 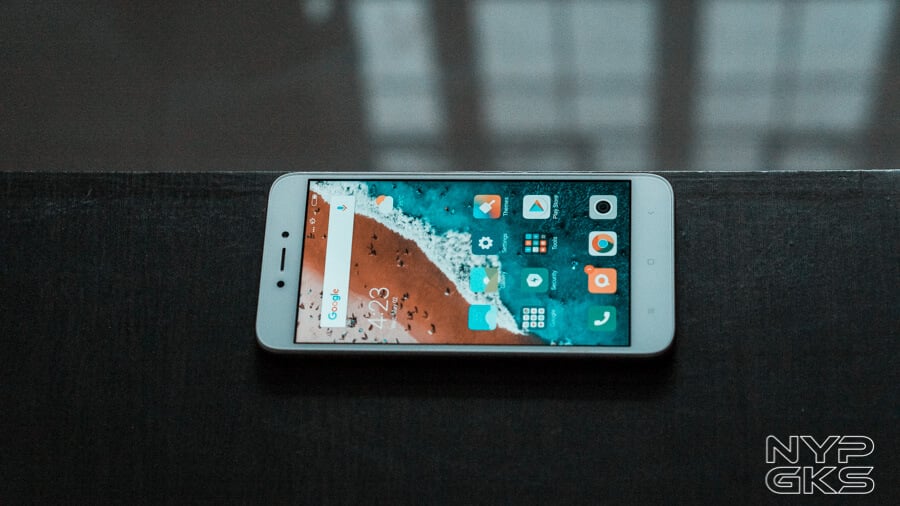 For a size of 5-inches, a 720p resolution is just enough to make details in the screen look sharp and decent. It is comfortable to look at —from reading texts to watching videos.

Speaking of videos, the screen quality is also decent. It is still not the best, but then again, for the price, you can not ask for more. It has acceptable colors and has no problems with the contrast. It also has wide-viewing angles and the screen brightness is ample enough so it is still usable outdoors.

The Xiaomi Redmi 5A is equipped with a 1.4GHz Qualcomm Snapdragon 425 quad-core processor, Adreno 508 graphics, 2GB of RAM, and 16GB of internal storage that can go up to 128GB by using a microSD card. 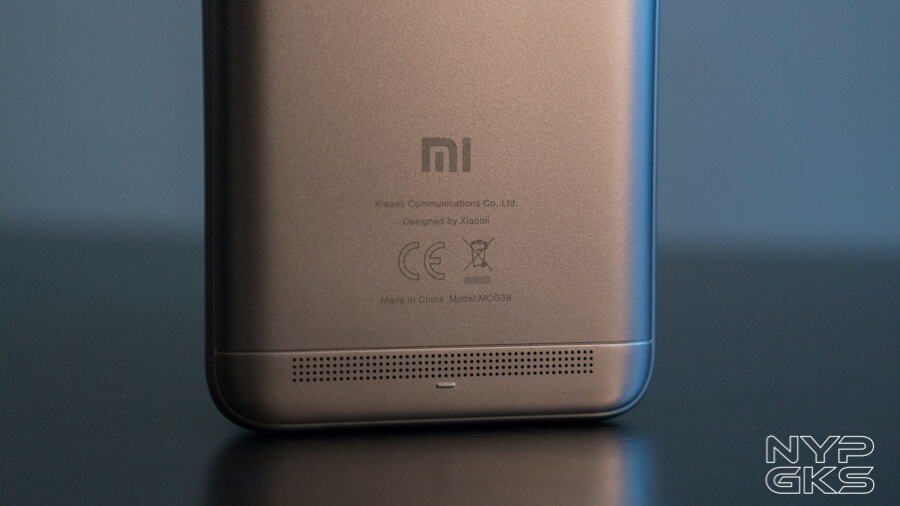 I was really impressed with this Redmi 5A’s performance. So impressed that I inserted my own SIM and used it as a personal daily driver for weeks. This thing can handle basic and day-to-day tasks really well, without those annoying jitters and lags that you’d expect from a device of this caliber.

Despite only having a quad-core processor and 2GB of RAM, this handset can handle pretty much any task really well. For one, apps launch really fast, switching between them is easy, and you can do anything without having to worry that something will crash. 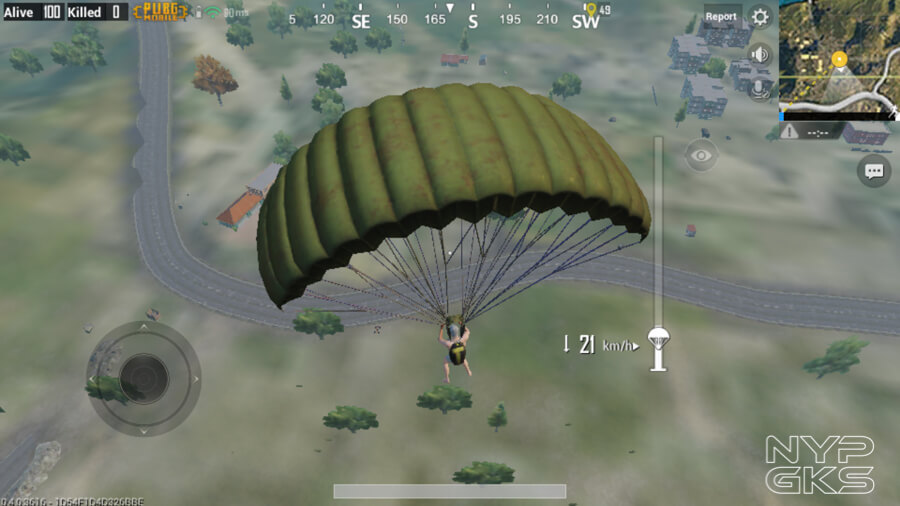 Moreover, the gaming experience on the Xiaomi Redmi 5A is also good. It’s definitely not the best, but for the price, it is still really impressive. I was able to play PUBG mobile without any major problems. The frame rates were decent, although there were some occasional stuttering here and there.

But still, if you’re not picky, it is still serviceable and is actually fun.

It’s 16GB of storage only allows 10.51GB of it to be usable as the other half is reserved for the system. But still, 10GBis still sufficient enough to store a lot of apps, pictures, videos, and games. If you really want extra space, you can just throw in a microSD card with a capacity of up to 128GB.

While I did like the hardware of the Xiaomi Redmi 5A, I can’t feel the same way with its operating system. This device runs on Android 7.1.2 Nougat with a layer of Xiaomi’s MIUI 9 interface.

The processor managed to provide an overall decent performance. But you can only imagine how faster it can get if it’s running on the more efficient Android 8.0 Oreo OS. But in all fairness, the current software of the Redmi 5A actually performed well, so I guess I’m just nitpicking.

With that said, the interface itself looks really clean. And if you’ve been following Xiaomi’s releases, you’re probably fully aware that their MIUI interface looks really identical to Apple’s iOS.

The Xiaomi Redmi 5A lock screen looks neat and the native app icons look nice which translates to a clean-looking home screen as it doesn’t have an app drawer. Some native and popular third-party apps also have a short animation, which plays everytime you open or close the specific app.

While most companies opt to place the control center at the bottom for easy access, Xiaomi still kept it at the top. No problems here, since the device is small enough for your thumb to reach any part of the screen.

Overall, I’m satisfied with the Xiaomi Redmi 5A’s user-interface. Although I still wish Xiaomi would give it an Android Oreo update.

Since it is essentially a low-end device, I wasn’t really expecting a lot with from its camera capabilities. For a device at this price, we should really focus on how the device performs — both in the processing side and in the battery.

However, despite being an economical handset, the camera on the Xiaomi Redmi 5A was still able to perform really well — especially for the price. But before we get into the specifics, let me just address the camera app. It works really fast — something that you would rarely see on an entry-level smartphone. The app opens quickly and takes pictures in a snap.

Going back, the Xiaomi Redmi 5A sports a 13-megapixel rear camera with phase-detection autofocus and a f/2.2. As what you can see below, the images I was able to get on this phone has impressive detail.s

The contrast and exposure might struggle in some scenarios. But for as long as you’re shooting with good lighting and your lens is free from smudges, it can still capture good photos.

The colors and saturation are also decent. Although it tends to overcompensate in vibrant subjects, it is still acceptable nonetheless.

Moving on, the front camera of the Xiaomi Redmi 5A is also capable of delivering impressive performance. Its 5-megapixel sensor might be limiting, but it tries to utilize every inch of it.

As expected, the sharpness is really not its strongest suit, but the details are still bearable. The exposure is also acceptable, even in low-light scenarios.

And of course, the front camera also features a Face Beauty mode. This feature does a decent job of removing blemishes and pimple marks, although it removes some details in the image — which sacrifices the sharpness of the photo.

Other than the design, cameras, and the performance — Xiaomi also did its best to get the connectivity all covered for the Redmi 5A.

This handset has WiFi 802.11 b/g/n, Bluetooth 4.2, GPS, and of course, 4G LTE. For some reason, some devices under this price tag don’t have LTE connectivity which is unacceptable in 2018. 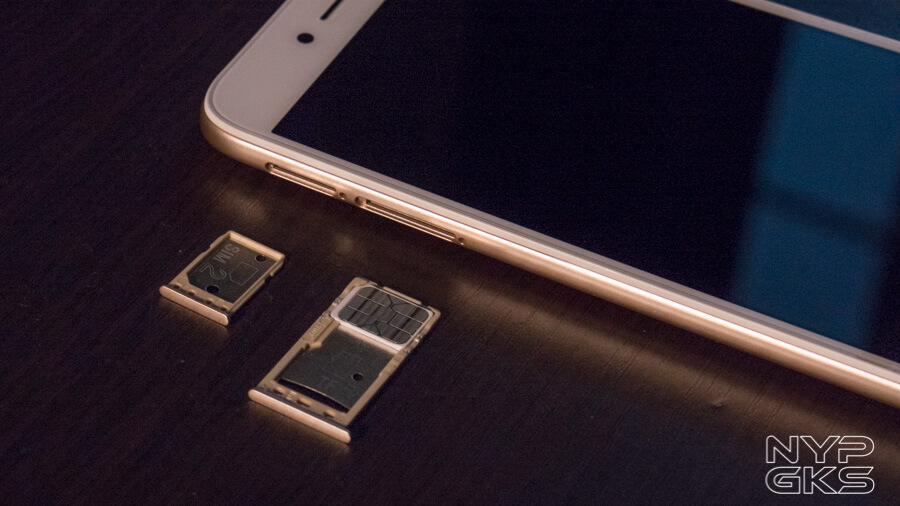 Nevertheless, all of the aforementioned antennas worked well during my testing of the Xiaomi Redmi 5A. The WiFi connected to our home network easily and was able to maintain strong connectivity wherever I am inside the house.

The Bluetooth connectivity also worked well with my wireless peripherals. And lastly, the 4G LTE — for as long as the geographical location has coverage — provides fast and reliable internet connectivity.

The Xiaomi Redmi 5A is not yet done in showing off. This phone has a 3,000mAh battery, which also performed surprisingly well in our tests.

In PCMark’s battery longevity test, the device scored a screen-on time of 9 hours and 13 minutes before reaching the 20%-charge mark. 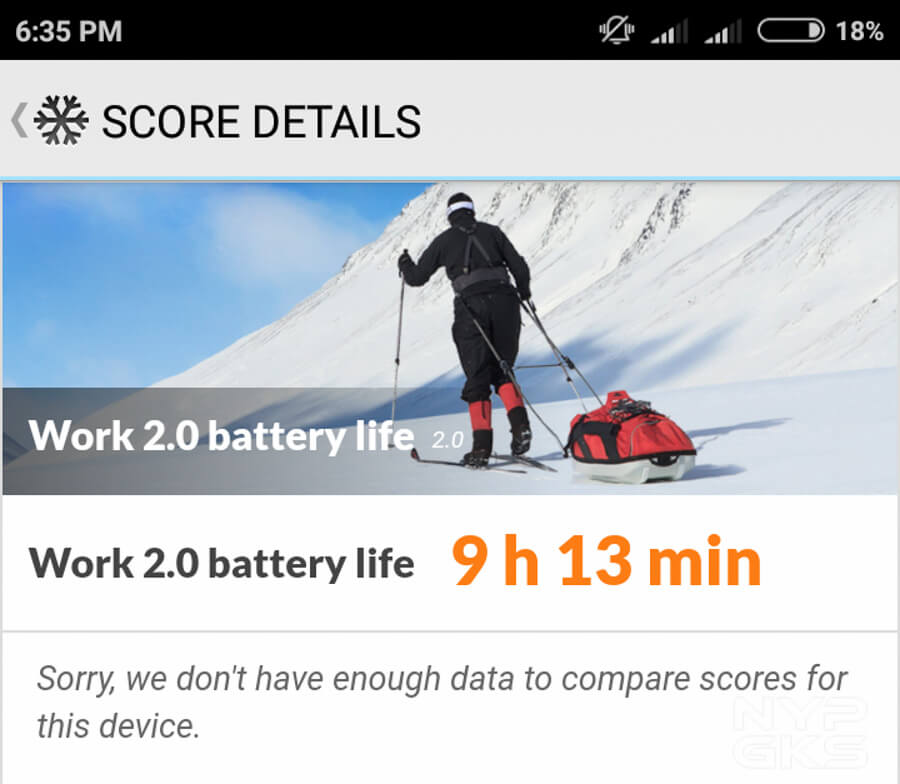 While on real-world usage, it lasted me around 12 hours before reaching 20%. That’s a day of casual web browsing, sending texts, and streaming music through Spotify partnered to an external speaker via Bluetooth. 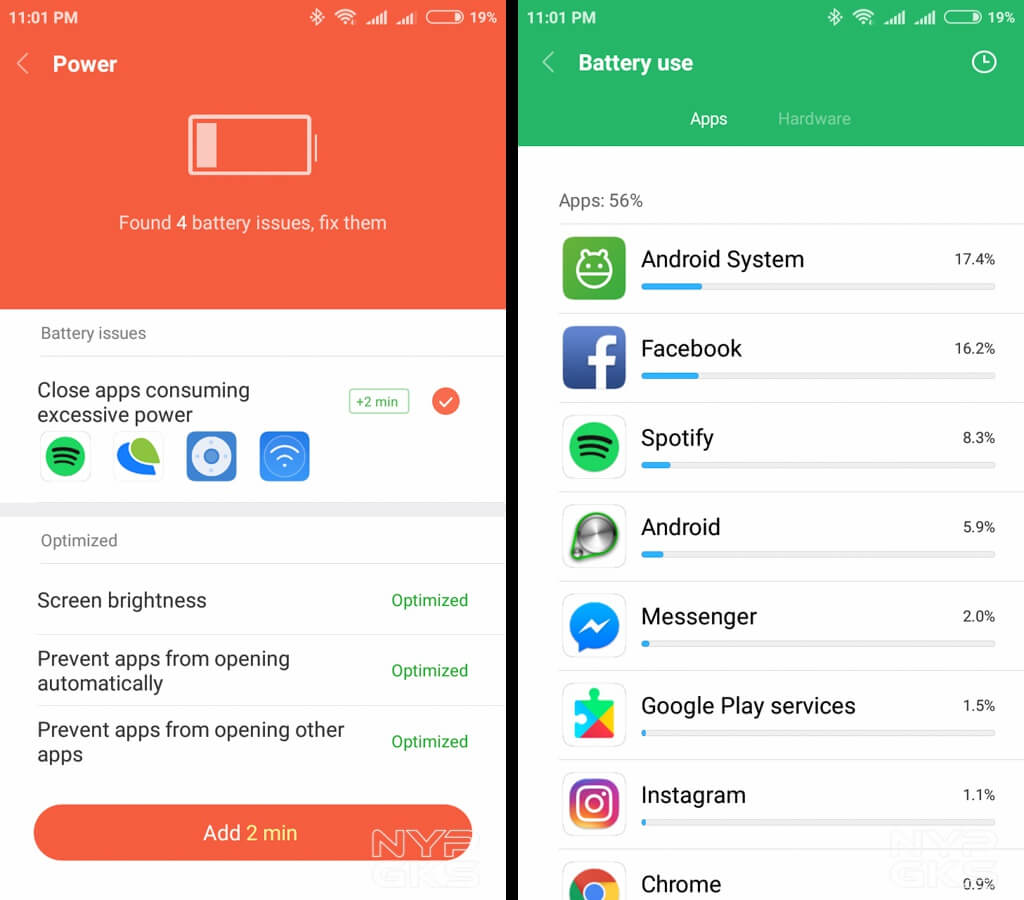 Additionally, the Xiaomi Redmi 5A has incredible stand-by time. Since I primarily use this device as a backup smartphone, I tend to leave it untouched for 3 to 4 days, and still get back to it with a decent amount of charge left.

Does the Xiaomi Redmi 5A deserve the best-selling Android smartphone title? Well, the answer is a definite yes. With this review, we found out that Xiaomi was able to get their magic working, despite the device’s cheap price tag. The design might be a bit boring, but it sure feels really sturdy and comfortable in the hands. The display is also acceptable, with the just right resolution to fill up its 5-inch screen.

Qualcomm’s Snapdragon 425 processor was also really capable. It might not be the best for gaming, but for the price, you can’t really ask for more.

The battery performance was also great. And, like I said earlier, I was really surprised by how good the camera is. It can easily beat more expensive smartphones in a camera shootout. 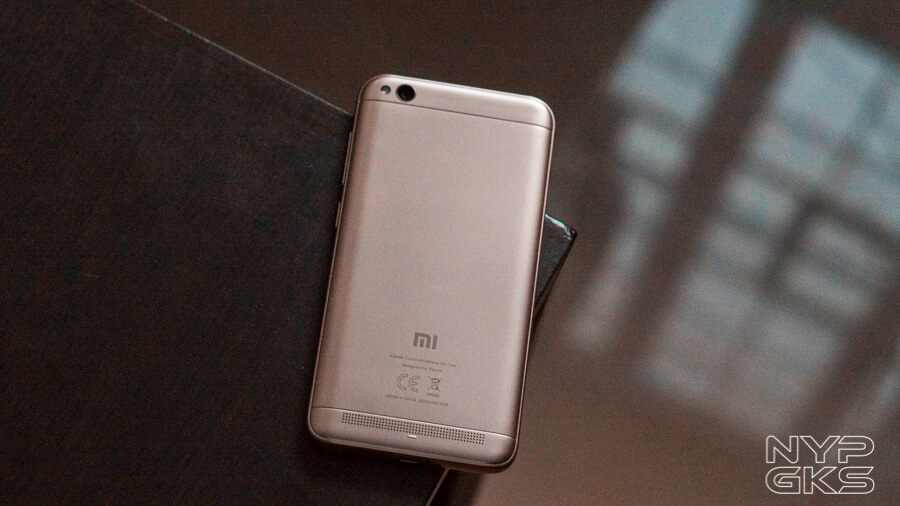 My only complaint here is its outdated software. Sure, the interface looks well and feels smooth. But it would have been even better if it runs on Android Oreo. Hopefully, Xiaomi would consider giving an update soon.

To wrap it up, I think the Xiaomi Redmi 5A is the best smartphone you can get in the sub-Php5k category.

Pricing and availability of Xiaomi Redmi 5A

The Xiaomi Redmi 5A retails for a price of Php4,390. This price is subject to change as Xiaomi tends to conduct random special sales from time to time.

It is available in Xiaomi’s physical stores in SM Megamall and TriNoma. You can also get it thru the company’s official stores in Lazada and Shopee. You can order online here.

For the full list of Xiaomi products available in the Philippines, visit this page.