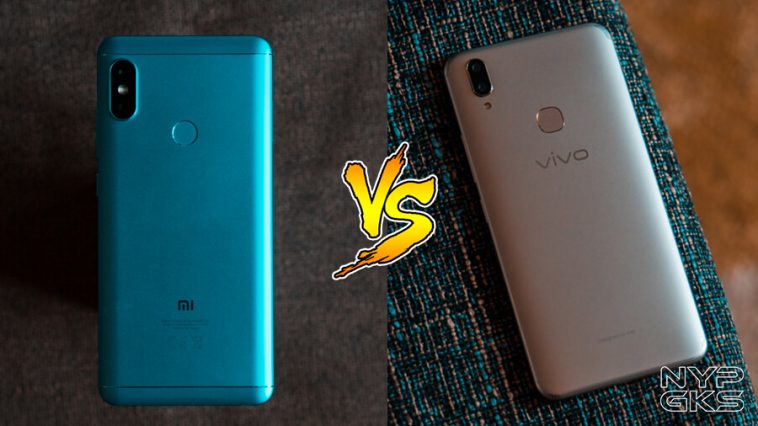 Launched back in March, the Vivo V9 is geared to be one of the leading contenders in the midrange segment here in the Philippines. But now that the Xiaomi Redmi Note 5 is part of the picture, the V9 gets another serious competition.

But now that Xiaomi has also brought the Redmi Note 5 in the Philippines, can it steal the spotlight from the V9? As we know, Xiaomi has a habit of coming out with devices that easily beats the competition on a particular price category with the unbelievable value they offer for the money. However, since Vivo has been fighting these kinds of battles for so long, they probably learned their lesson already. Today we’ll be comparing Xiaomi’s and Vivo’s newest offering in the midrange category, and see which between the two are actually the best option for you.

Read our Xiaomi Redmi Note 5 vs Vivo V9 specifications and features comparison below to figure out which is the better midrange smartphone. Both the Xiaomi Redmi Note 5 and the Vivo V9 really went neck and neck on the specs table. However, the V9 easily lost to the Redmi Note 5 in the price tag department. As you can see, Xiaomi’s offering can deliver pretty much everything the V9 has in store for a much cheaper asking price.

The two shares almost the same screen size and resolution. Although I gotta hand it to the V9 for having the trendy 19:9 aspect ratio and the display notch on top. But most people might still prefer having the standard 18:9 screen without the obtrusive display shenanigan on top.

Xiaomi also steals the win by using a faster and newer Qualcomm Snapdragon 636 chipset on the Redmi Note 5 while the Vivo V9 stays at Snapdragon 626. Thankfully, they both run on Android 8.1 Oreo, but with their own manufacturer-made skins applied on top of it. The Vivo V9 was able to redeem itself by having a better selfie camera — something that they are really known for years. It comes with a 24-megapixel front camera with a really good camera app for taking selfies. On the flip side, the competition only has a 13-megapixel shooter.

Both phones also have a dual camera setup at the back, with the same and a very familiar orientation. However, the V9 takes the lead by having a better 16-megapixel primary shooter than the Redmi Note 5’s 12-megapixel sensor. The V9 also has face unlock, while the latter has an IR blaster.

But then again, the Xiaomi Redmi Note 5 was able to secure its win by having a cheaper price tag and a relatively larger 4000mAH battery.

It’s pretty clear who won this competition. For Php11,990, the Xiaomi Redmi Note 5 easily beats the Vivo V9. But before you go out and get it in the nearest mall, hold up for a little as there’s something I need to tell you. First, the Redmi Note 5 is not available until May 15. Second, it will only be available in select stores including their official shops in TriNoma, SM Megamall, and through different online malls. Lastly, you might want to act fast once it hit the shelves as these kinds of Xiaomi smartphones easily goes out of stock.

But if you opt for the Vivo V9 with its Php17,990 price tag, you’re pretty much good to go as it went on sale a few weeks back and you can get it pretty much any malls or shops you go. It’s also available through Vivo’s official Lazada stores and Shopee.