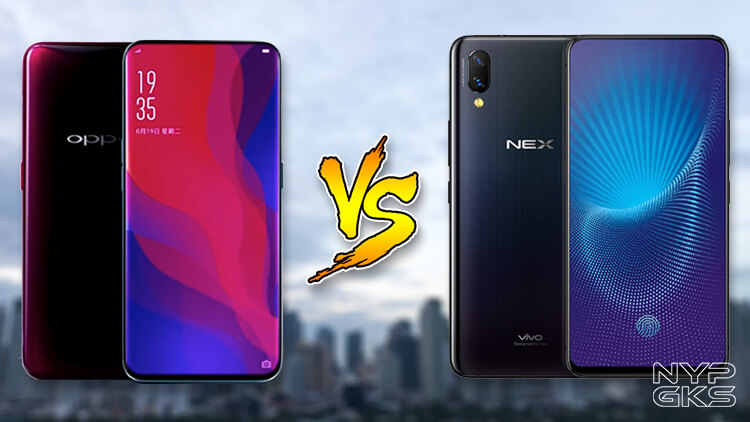 After a long time, smartphone manufacturers are finally starting to be creative again. The most surprising thing is, this revolution is coming from the relatively new brands on the block.

If you’ve been following the news lately, I’m pretty sure you’ve heard of these two devices — the OPPO Find X and Vivo NEX S. These two phones are pretty much changing the industry and are basically cleaning up the mess that Apple created with the iPhone X.

What I’m referring to is the display notch. Some people might look at it as a status symbol, but if you analyze it properly, having a tall aspect ratio but being blocked by a display notch is actually kind of dumb. So, we got really excited when both OPPO and Vivo came up with a solution to this. However, there’s actually more to a smartphone than the design. In our OPPO Find X versus Vivo NEX S specifications and features comparison, we’ll see which between these two devices is better on paper. Specs-wise, these two smartphones have very identical specs — at least on the important ones. For starters, both the OPPO Find X and Vivo NEX S run on a Qualcomm Snapdragon 845 processor, which easily qualifies them as a proper flagship device.

They also have the same 6.4-inch FHD+ AMOLED screens. However, they have their own strengths and weaknesses. The Vivo NEX S brags its under-display fingerprint scanner, while the OPPO Find X has a “Panoramic Arc Screen”, which provides a really sleek, Samsung Galaxy S9-like look.

Speaking of fingerprint scanners, the OPPO Find X doesn’t have one, which is kind of odd since they can just put it in the back if they can’t bury it under the screen. But to make up for it, OPPO equipped the Find X with a complex 3D face recognition, complete with different sensors and special cameras — which is just like what Apple used in the iPhone X to make the face scanning more accurate.

And since they have this technology, OPPO was able to add a feature called 3D Omoji — their own take on Apple’s Animoji.

On the other hand, the Vivo NEX S also has a Face Unlock security feature, but it only uses the single 8-megapixel camera without all the fancy sensors. Speaking of cameras, It’s quite obvious that the OPPO Find X takes the win on this category. It has a better and sleek-looking implementation on the pop-up camera. Both the selfie and dual rear cameras, plus the sensors used for the 3D face scanning, are placed in a single mechanism that pops-up when needed.

The entire mechanism also compliments the overall design of the device. Which really looks cool just by looking at it in pictures. In contrast, the pop-up camera on the Vivo NEX S still looks cool, but it’s nothing against the OPPO Find X. There’s only a tiny box that emerges on the top that houses its 8-megapixel camera, while the dual 12-megapixel and 5-megapixel rear cameras are placed on the back in a traditional fashion — albeit quite similar to the iPhone X.

The cameras of the OPPO Find X is a 25-megapixel selfie shooter and 16-megapixel + 20-megapixel dual rear cameras with an LED flash in the middle.

But to the Vivo NEX S’ credit, it does have a relatively bigger battery than the Find X. It sports a 4,000mAh capacity while the latter only has 3,730mAh. Also, the NEX S is noticeably cheaper than the Find X. The OPPO Find X will retail for a price of EUR999, while the Vivo NEX S starts at CNY4,498. When directly converted to Philippine pesos, that’s around Php61,700 and Php37,300, respectively.

To finally wrap it up, if value for money is what you’re looking for — going with the Vivo NEX S is a no-brainer. However, I personally think that the OPPO Find X has the best smartphone design to date — even when compared to other flagship devices in the market right now.

It also has better pop-up camera implementation and some pixel-packed cameras. So if those things mean so much for you, and you have all the money in the world, then going with the OPPO Find X is also a good choice.