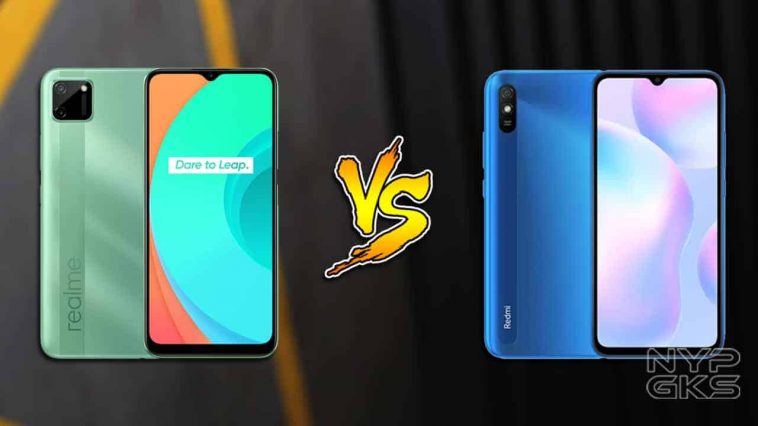 Are you in the market for a cheap smartphone? The competitors in today’s specs comparison shows that ‘cheap’ doesn’t always translate to poor quality.

This first one is from Realme, a fast-emerging brand known for its bang-for-the-buck releases. Their latest offering, the Realme C11, is being marketed for students looking for an affordable device for home school — or if you just want a device that can do anything for under Php5,000.

Realme’s latest is going head to head with the recently announced Redmi 9A.

Sitting in the same price range, this device also attempts to be a top choice if you’re looking for a really inexpensive smartphone.

So the question is, which between these two devices should you spend your savings on? Our Realme C11 versus Redmi 9A specifications and features comparison has the answers.

They might be entry-level devices, but both Realme and Xiaomi managed to make them look a little less boring.

They both come with a vertical stripe that transcends from the cameras to the logo on the bottom. But personally, we do prefer the square camera glass and the larger logo on the back of the Realme C11.

But for color the colors, Xiaomi is giving you more options as the Redmi 9A comes in Carbon Grey, Sky Blue, and an interesting Ocean Green option. On the other hand, the C11 is only available in Mint Green and Pepper Grey. Realme might introduce a third color soon, just like what they released a Volcano Grey option for the Realme C3.

Whether a design looks good or not will depend on your preference, so we’ll let you decide on this one.

For the build, both models don’t come with Corning Gorilla Glass, but they do come with a pre-installed screen protector. They also come with plastic back, just like most entry-level phones.

Their screens are large and sharp enough for multitasking, playing games, and reading texts.

This is where their main difference lies. The Realme C11 sports a MediaTek Helio G35 octa-core processor, which obviously outperforms the Helio G25 of the latter in general tasks — from social media browsing, video calls, and more. The G35’s GPU is also slightly overclocked to squeeze out more performance in games.

Both devices do come with the same 2GB of RAM, and 32GB of storage that you can expand via a microSD card.

With the Realme C11 and Redmi 9A you’re getting the same 5-megapixel front-facing camera. It’s decent enough for taking selfies or participating in online classes. They also share the same 13-megapixel primary camera.

But with the Realme C11, you’re getting an extra 2-megapixel depth sensor, which the latter lacks.

Budget phones like these always come with large batteries to compensate for their underwhelming hardware.

In this case, we’re getting 5,000mAh batteries with 10W fast charging. You can stretch the battery by up to two days or more if you’re just casually web browsing, messaging, and taking pictures. But if you watch videos a lot, play games a lot, or do a lot of school works, then you might have to reach for the charger every night.

Although they have a lot of similarities, the Realme C11 gets a one-up by having a more powerful processor and an extra camera. You can learn more about it in our full review.