It’s been a while since Red Dead Redemption 2 was released, about 2 weeks by the time I’m writing this review, and there’s still so much to do after finishing the main story. This game is simply amazing.

Red Dead Redemption 2 follows the life of Arthur Morgan, a kind-hearted outlaw, and the rest of the notorious Dutch Van der Linde gang as they struggle to survive the end of the wild west era. 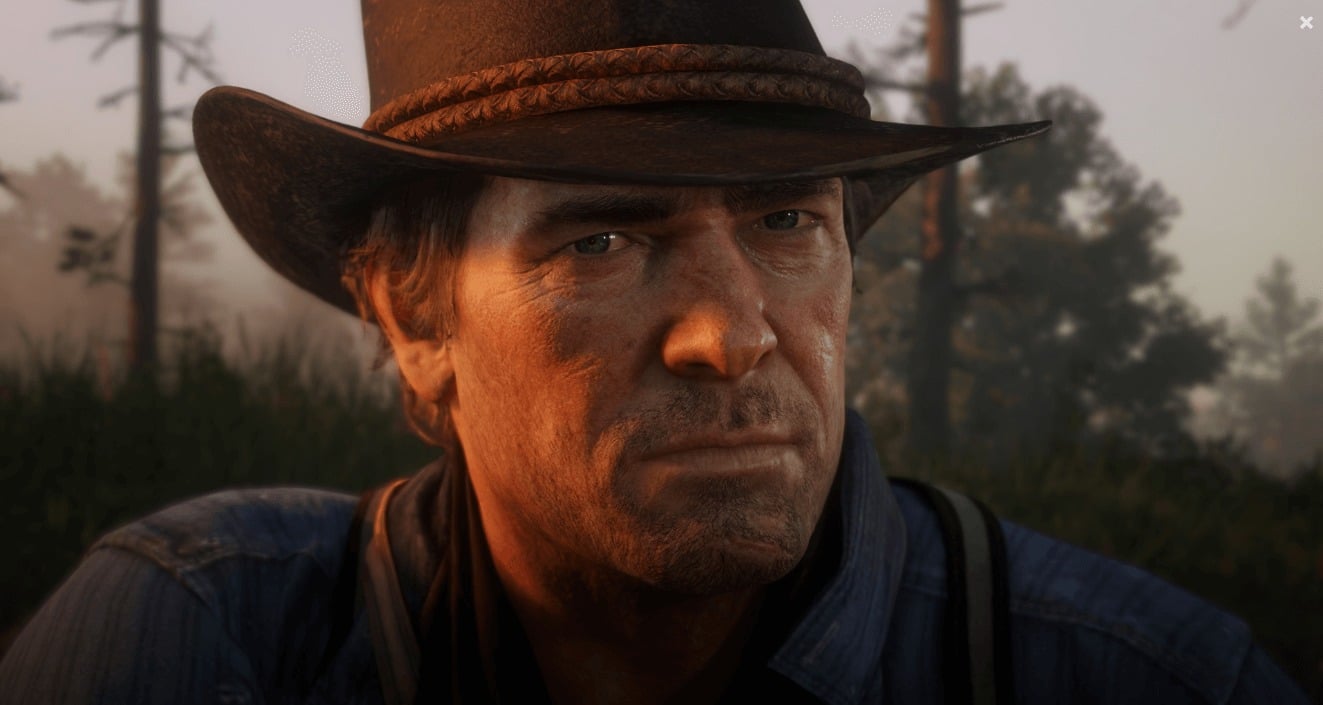 As the time changes, more and more lawmen are hunting down the last remaining outlaw gangs and those who do not surrender are either killed or imprisoned. It’s a struggle, as Arthur and the outlaw gang are in a race against an unstoppable foe, time.

After spending countless hours and sleepless nights playing, here’s my review on this masterpiece of a game.

*WARNING* Some spoilers ahead. 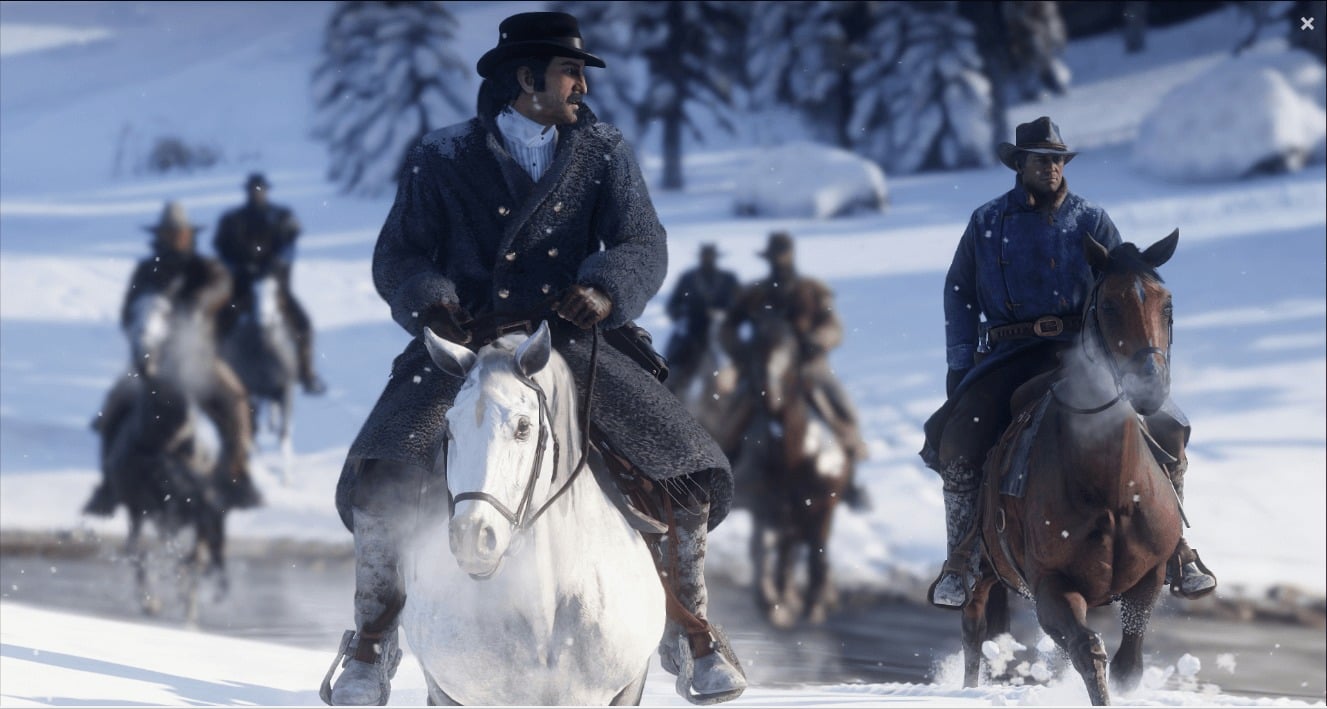 The story follows the life of Arthur Morgan and how the outlaw gang he’s a part of is struggling to change and cope with the new times, or simply just refusing to adapt to a new way of life. The gang is hellbent on a pursuit of the grand escape to somewhere better, away from the progressing cities, where they could live their lives freely.

Remember how you’ve hated Bill Williamson, Javier Escuella and Dutch Van der Linde from the first Red Dead Redemption? You’ll probably feel different about them once you progress through the game. It actually felt weird seeing Bill, Javier, John and Dutch getting along so well. There’s this good yet uncomfortable feeling you get when playing a prequel; as you know how the story goes in the end but knowing how it led to that is something you’re not yet aware of.

Red Dead Redemption 2 offers a lot of character development which in turn, makes the player emotionally invest in some characters. Each line from every character in the game was well thought of — even the random NPCs!. This is Rockstar’s signature move when creating a game, they’re very detail oriented even to the tiniest thing. 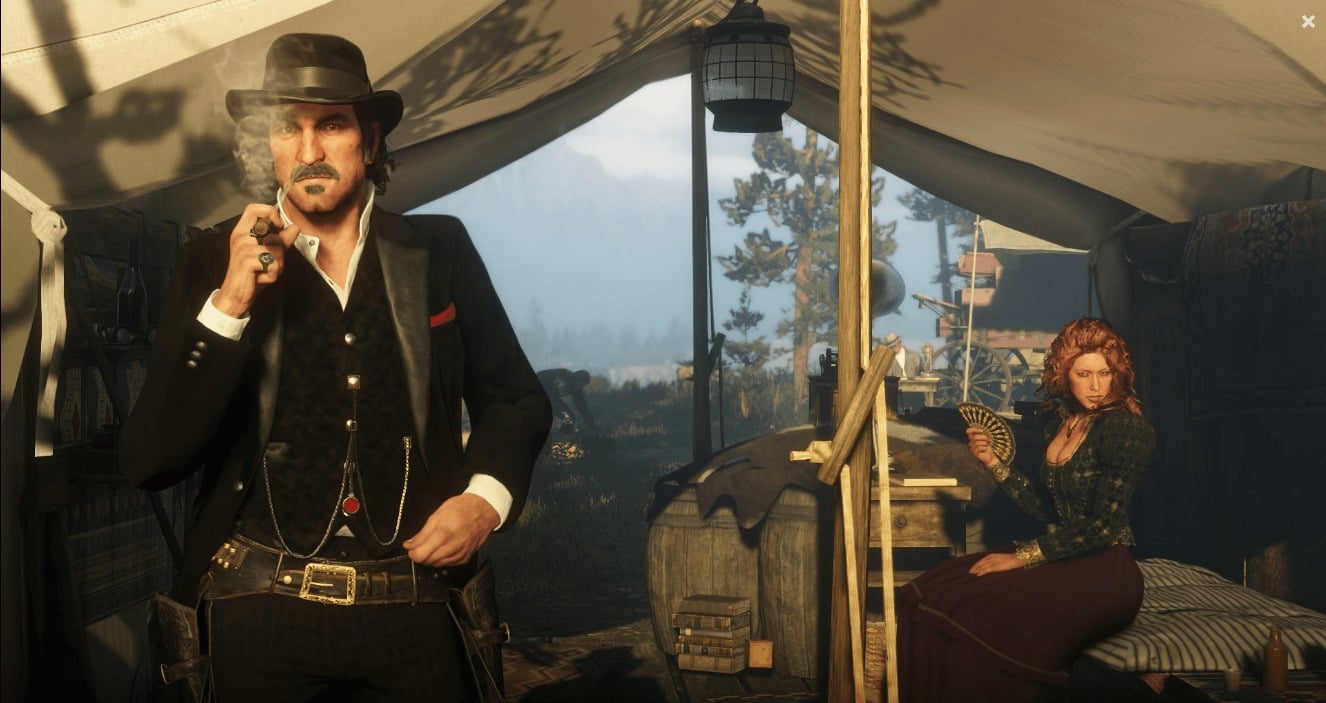 Watching Dutch’s slow descent into madness made me better understand how he ended up being on John Marston’s crosshairs in the first game. But the best character development throughout the game belonged to Arthur. From having a simple, straightforward “outlaw” perspective in life, he was able to change his path and make amends in the end. I honestly believe he’s the best Protagonist from any Rockstar game ever made. (Sorry, John)

I can’t remember a game where I’ve been this emotionally invested in a character. Maybe the first time was with the first Red Dead Redemption game in John Marston. But after playing the prequel, Arthur Morgan’s story provided more depth and watching him go through all of his struggles in the end was too much. 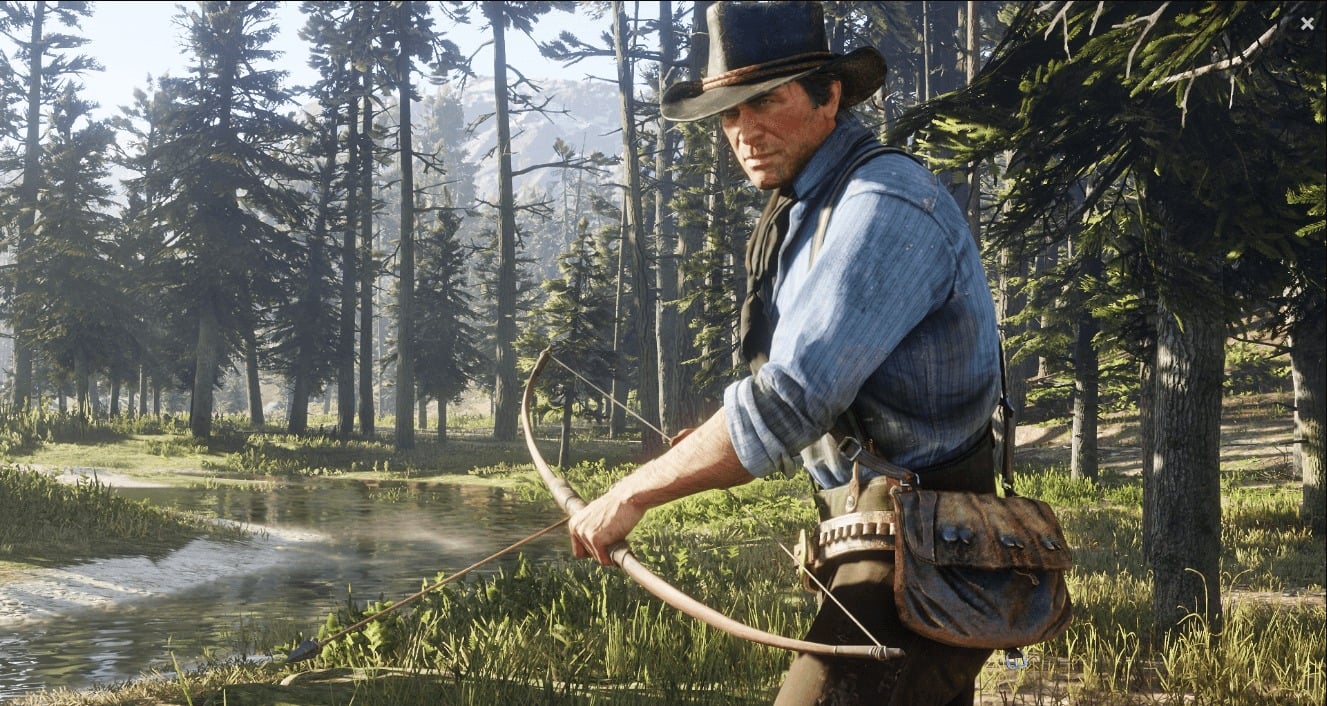 It’s easy to get distracted in Red Dead Redemption 2. Setting a waypoint to go to a Main Story Mission? Good luck with that. Here’s a side quest, a rare horse/animal for you to get and other spontaneous events for you to check out. There’s truly plenty to do in the game and I’m not complaining.

Being a Rockstar game, you should expect the game to be realistic and extremely detailed. Hunting animals and carrying their dead carcass on your shoulder or stowing them on your horse will result in a bloody shoulder or a bloody horse. If you managed to rob a store and paid the bounty and decide to enter the store again, the owner will actually remember you and will be cautious in dealing with you. Also, have I mentioned that the Horse Testicles shrink once you ride them up to the snowy areas?

The replayability factor in Red Dead Redemption 2 is absolutely through the roof. Aside from doing the main missions, you can always go out and free roam the huge map. You can do many activities like:  bounty hunting, fishing, hunting hegendary animals, play minigames like Poker and Dominoes, rob banks or trains, watch a show, go window shopping, get into a duel and most importantly, enjoy the game. These are just some of the things you can do from the top of my mind. 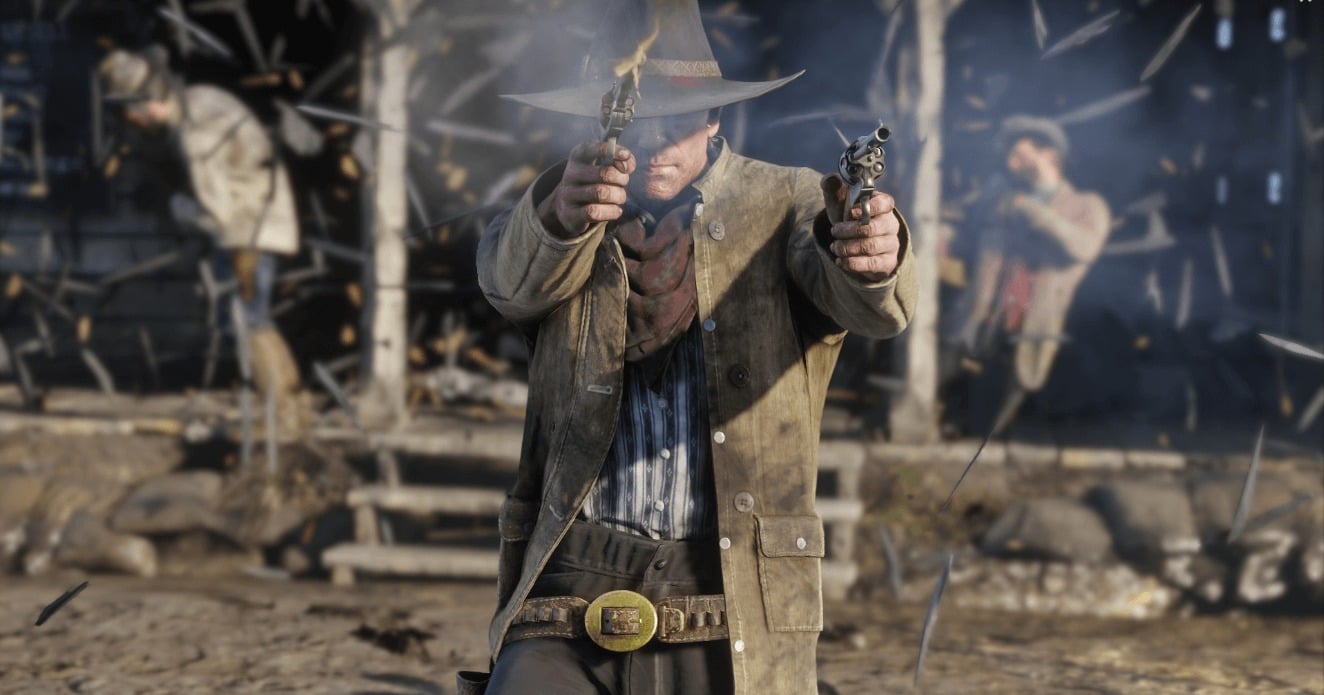 Red Dead Redemption 2 also has a “honor” system that judges every action you do with Arthur. Robbing and killing an innocent man while free roaming will get you negative points that’ll lead you to being dishonorable, while helping other people in need will get you positive honor points. Depending on how you choose to play, you’ll be treated as such by other characters in the game.

In addition to the honor system, you’re introduced to the Health, Stamina and Dead Eye cores. You’ll really feel the difference in the game once these cores deplete over time and use. In order to get your cores refilled, you can sleep at a campsite, eat specialized provisions and tonics just how a normal person lived in the early 90s. Be careful though, eating too much or too little can result in weight changes and stat debuffs. Personally, I had a hard time trying to get Arthur off the underweight category even though I’ve made him eat a lot of food. 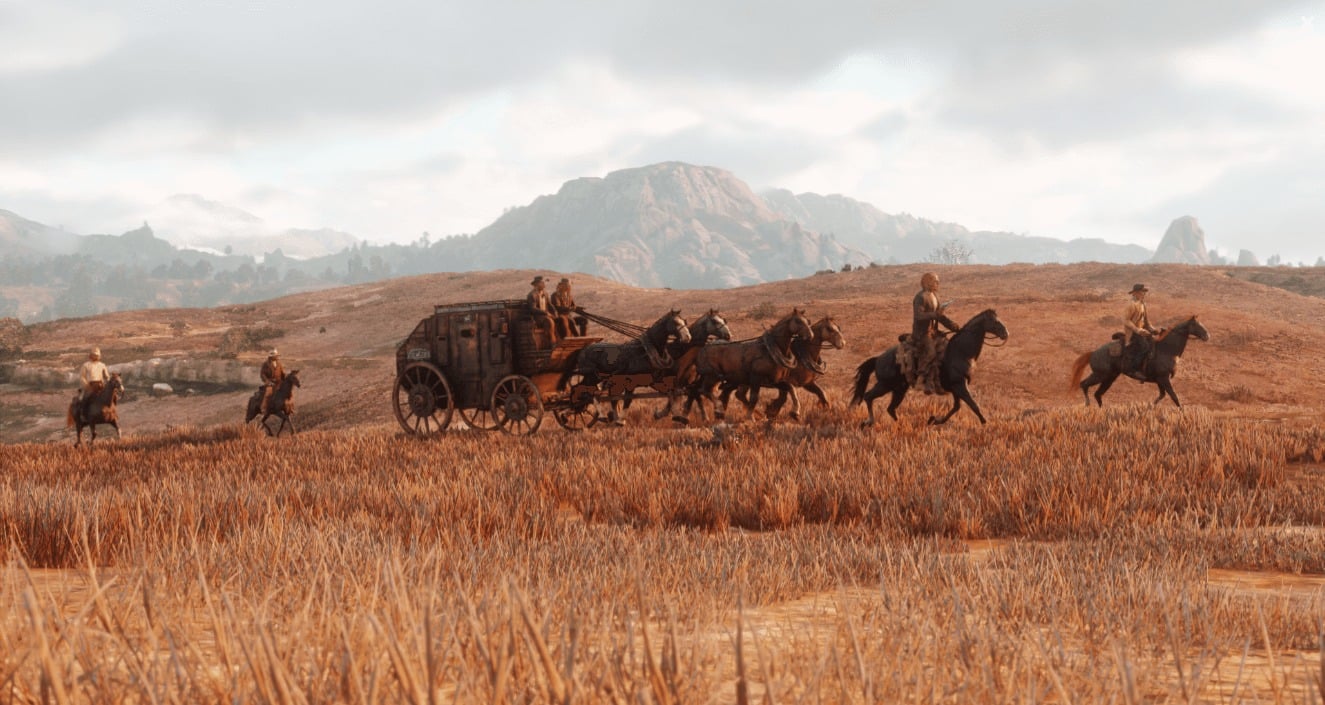 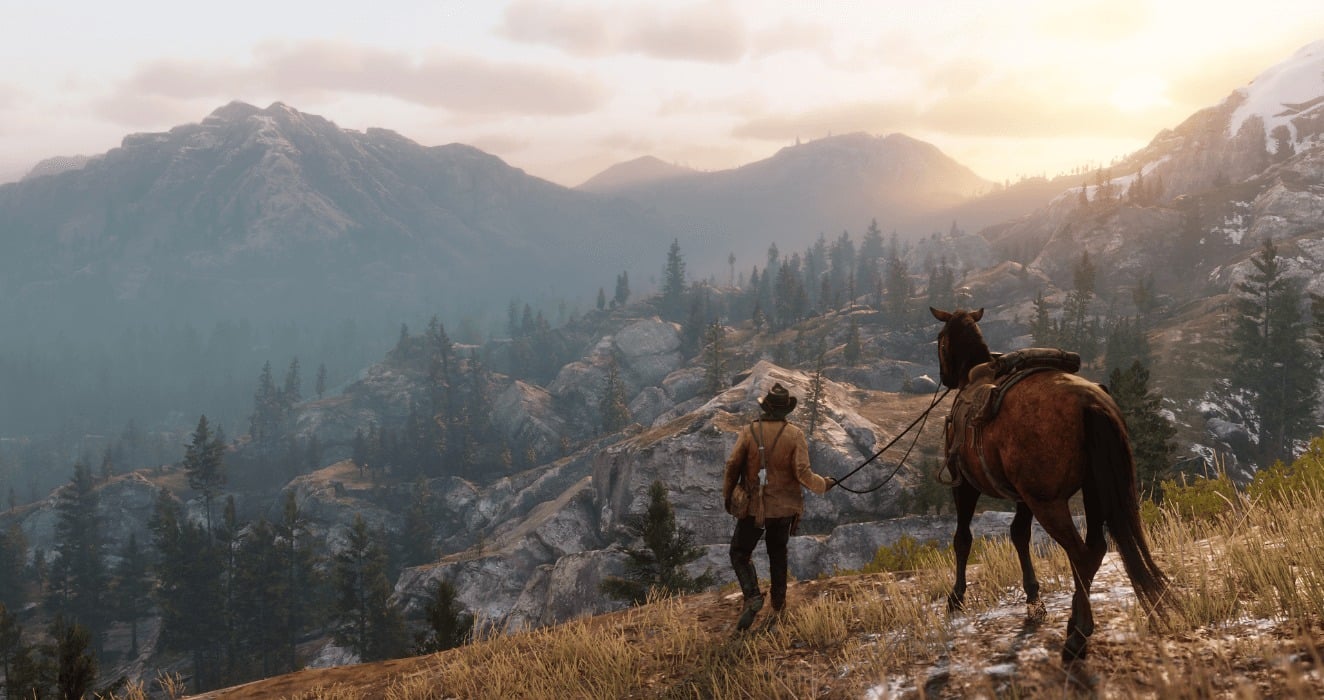 Red Dead Redemption 2 visually looks like a game that should be played on the next generation of consoles like PlayStation 5 or the next Xbox.

The Red Dead Redemption 2 world is massive compared to the original game and having a massive map means that there are a lot of places to explore. There are various locations to explore starting from the snowy peaks and areas from Chapter I to the plateaus, forests, swamps, plantations, farms, caves, developing towns like Valentine and the modern city of Saint Denis and all of these are beautifully visualized by Rockstar. 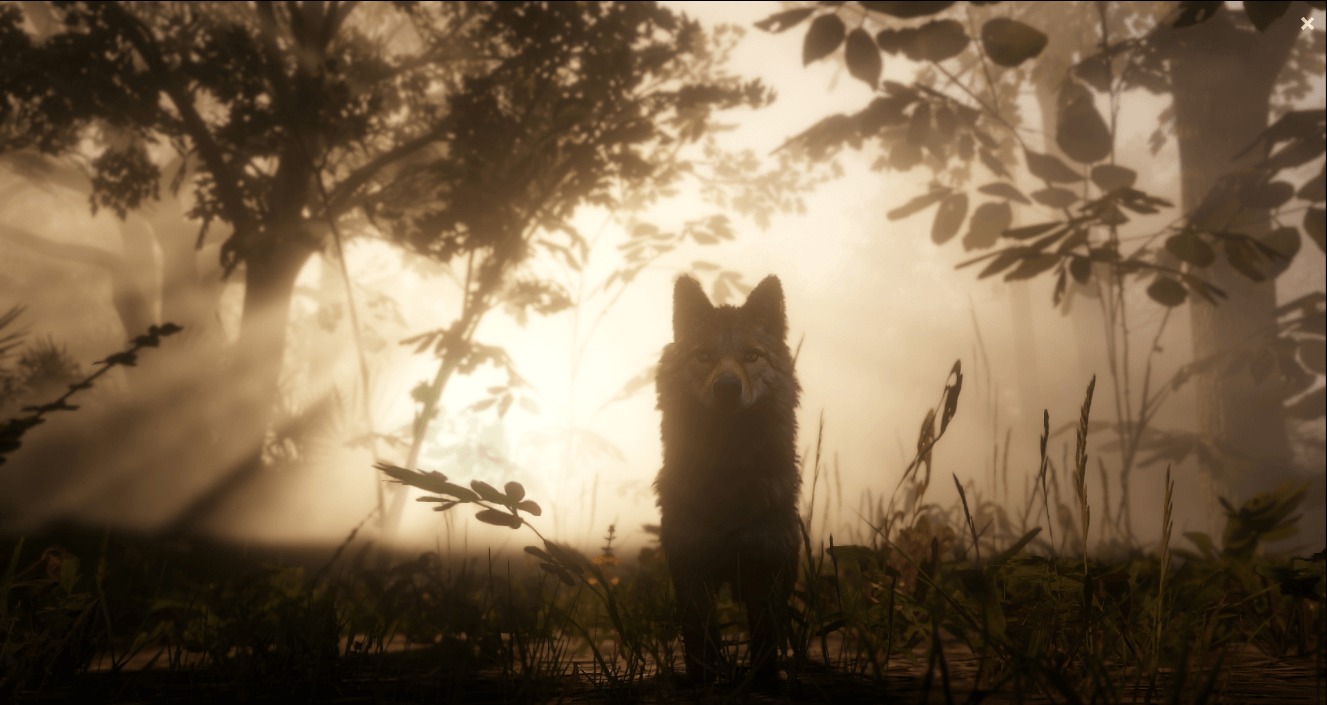 You can experience various seasons and weather conditions while playing Red Dead Redemption 2. All of the seasons are in the game, this also include severe weather conditions like snowstorms and dust storms. Watching how the day turns into night is also a treat. Try going to the top of a plateau and experience the sunset from your point of view. You can literally ride into the sunset in Red Dead Redemption 2.

The lighting in the game looks superb and has made the character faces more lifelike, as if it wasn’t lifelike enough already. You’ll know if the day is too hot or sunny as the sun’s glare can be seen from your television screen. Those simple yet important details do add up a lot to the overall gaming experience. 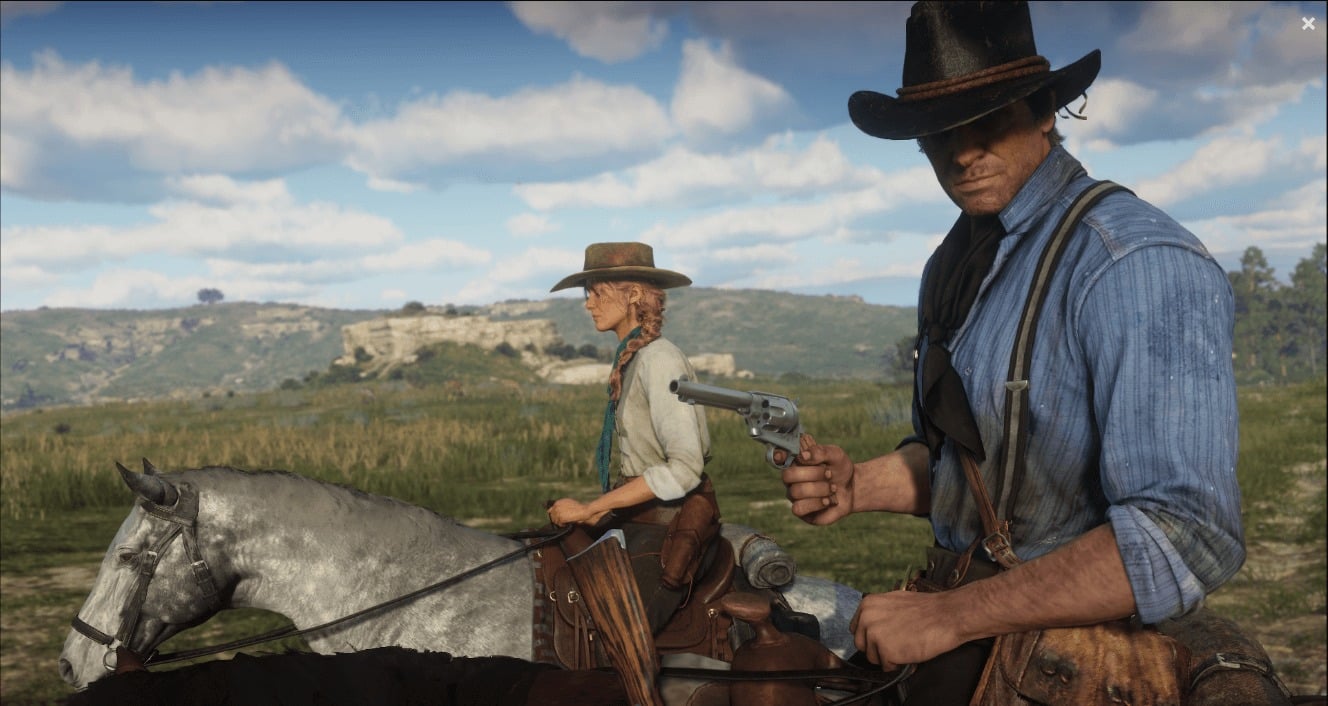 The improvements on the facial animations of different characters are also noticeable. It’s impossible not to compare Red Dead Redemption 2 with GTA V, since they’re both made by the same company, but you can actually see a huge jump in its development.

The most noticeable thing is how the characters communicate with each other in cutscenes or in the game itself. The eye contact and facial responses when conversing look top notch. Also, as you progress through the game, Arthur’s hair and facial hair grows as well. To justify how detailed the game is, Arthur’s facial hair actually moves as if a gentle breeze of air has passed through his face. 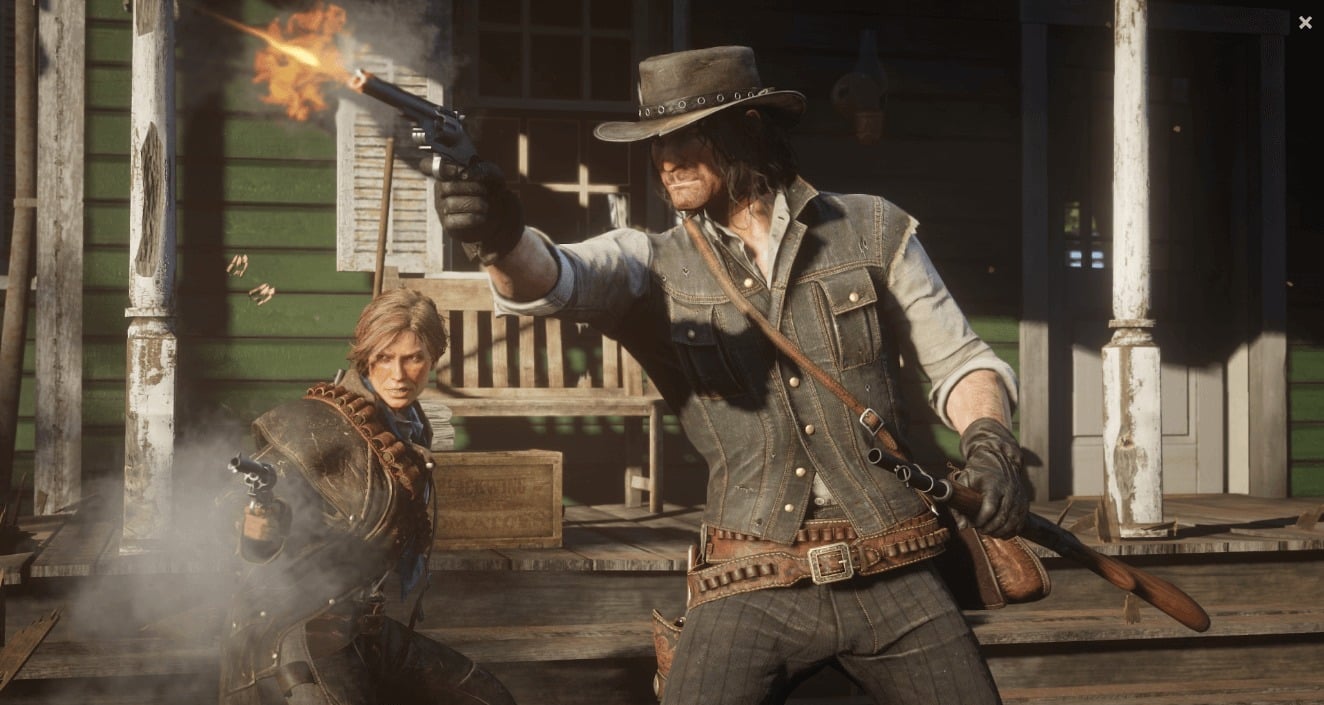 From the sound of firing a gun in the mountains, to the gushing of water down a stream, everything was so lifelike that you’d actually feel like you were inside the game. The music played during intense missions and the somber music played during the emotional missions were all intergrated perfectly.

The last mission of Red Dead Redemption 2 with Arthur was the most iconic moment for me. The music being played as he was riding back to the camp in order to confront Dutch and Micah, while hearing the praises you’ve received from different people you’ve helped along the way, really hit me hard. Or if you played the game as a dishonorable outlaw, you’ll hear the negative comments said about you. The music actually lets you feel all of the emotions that’ll make you finally accept that this is his last push as his time in the world has nearly come to an end. 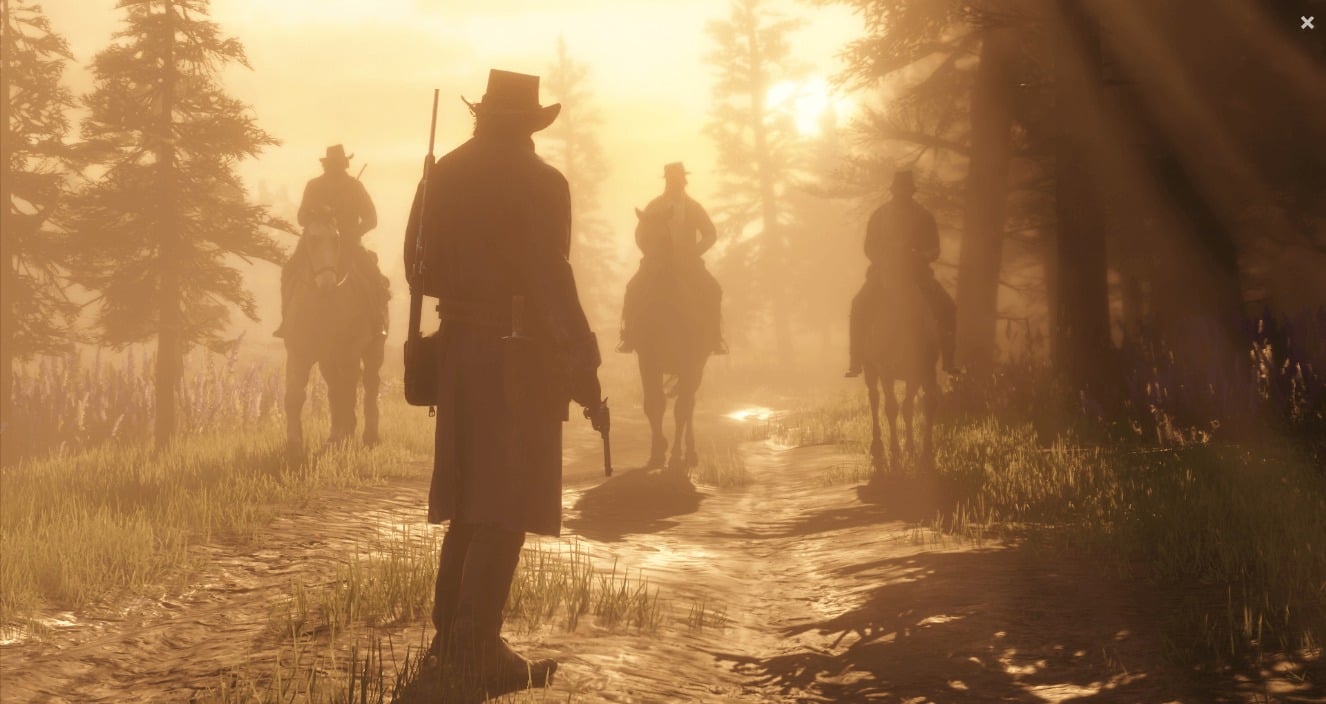 Red Dead Redemption 2 might honestly be the best game I’ve ever played to date. From the movie-like storyline, the replayability of the game, high quality graphics and immersive sound. This game is truly a masterpiece and I would recommend everyone to get the game and experience the ride yourself.

The game is meant to be enjoyed slowly, like sipping your favorite cup of hot coffee. Rockstar wants you to settle down and take in the beautiful game they’ve created. Play the game too quickly and you’ll tend to miss the smallest of things. I would suggest taking a seat back, relax and enjoy playing the game at a slow pace.

What do you guys think of the Red Dead Redemption 2? Is this the best game you’ve played as well? Let us know down in the comments section.