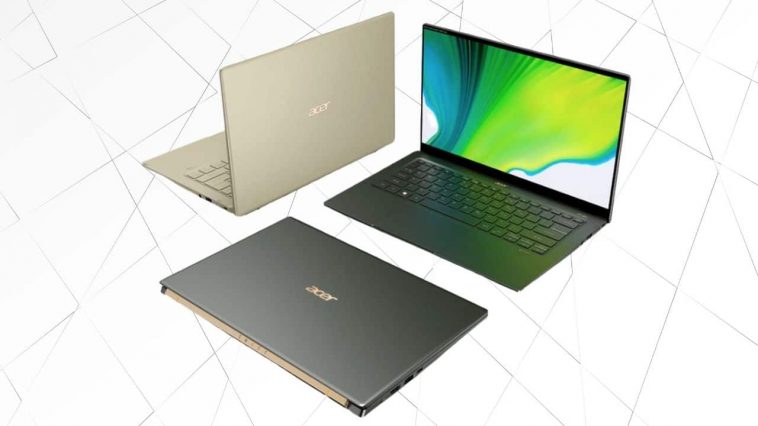 There are two models in the ConceptD series, the ConceptD 3 and the ConceptD 3 Ezel with its signature Ezel hinge featured on it. This enables it to be operated in 6 distinct modes (display mode, adjustable float mode, stand mode, pad mode, share mode, and traditional laptop mode).

The ConceptD 3 Notebook offers 14-inch and 15.6-inch Full High Definition screen display that is also pantone validated. It is powered by the new 10th gen Intel Core H-series chipset, with optional GeForce GTX 1650 Ti GPU or NVIDIA Quadro T1000 (ConceptD 3 Pro). It comes with the usual clamshell design, with claims that the battery can last for 20 hours.

The Acer Swift 5 weighs less than 1kg and is ultra-thin, it features 14-inch Full HD IPS display with 90% screen-to-body ratio as well as a maximum 300 nits brightness. The display panel is protected by the Antimicrobial Corning Gorilla Glass.

Under the hood is the next generation Intel Core processors with an NVIDIA GeForce MX350 graphics. The Notebook has LPDDRAX RAM up to 16GB and 1TB PCle SSD storage. The options available for connectivity include the Thunderbolt and USB 3.2 Gen 2 ports, USB Type-C, Wi-Fi 6, and Bluetooth 5.0.