There’s a new Catalyst graphics driver being put out by AMD called the Catalyst Omega, with many new attributes for a superior gaming experience. Such improvements include the new VSR capabilities, FreeSync, better frame pacing, a 5k support monitor, and much more.

The VSR (Visual Super Resolution) is a new installment that will allow gamers to run their favorite games with an incredibly high resolution. Of course, AMD isn’t the first to do this, but their version seems to be very promising. In addition to VSR, they’ve also developed a 5k support monitor which, along with the Catalyst Omega, can run 5120 by 2880 pixel resolution for more optimal gaming and incredible graphics. Owning both of these products will drastically improve the gaming experience, especially with the Alienware Graphics Amplifier which AMD can now support.

Among new additions is the 24 Eyefinity display, which allows you to connect to up to 24 screens if you have four graphics cards to connect six screens to each. Also, if you’re using multiple graphics cards the farm pacing of AMD’s Catalyst Omega will be improved in comparison to previous models, that always had issues running and APU and GPU together. These improvements will make the gaming process smoother, especially when multitasking. 60 fps games will also run smoothly with the new graphics driver, because of the FreeSync application. 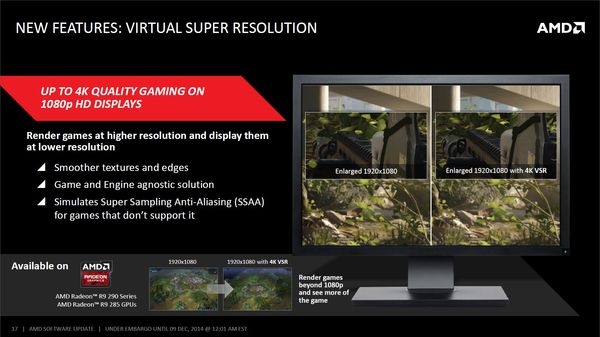 Aside from the new attributes of the Catalyst Omega, they’ve also improved its prior specifications in order to fine tune their product. It’s estimated that the improvements made are up to 19% higher performance than its most recent driver before the Omega. There also at least 10 bugs from previous systems that AMD has fixed, including how well it runs Youtube and various crashes. Their video playback has been worked on heavily to improve it simplicity and overall affectiveness. There have also been improvements in its audio capabilities and games freezing or buffering.

The AMD system is also increasing its developer features to be more capable and easier to use, which is one of the main complaints the last driver had.

The last Catalyst driver wasn’t bad, but there were definitely areas that needed improvement. It looks as though AMD has decided to fix everything wrong with the last one and give gamers a driver they can count on and excel with in the Omega Catalyst.