Toshiba’s latest Windows 8 devices have manifested themselves in two new tablets. The new Toshiba Encore 2 are 8-inch and 10-inch tablets that “offer productivity, performance, and portability in a thinner, lighter design.”

Save for the difference in screen size, both Toshiba Encore 2 tablets have similar specs. Sporting an IPS LCD with 1280-by-800 (WXGA) resolution, these tablets are powered by a quad-core Intel Atom processor and Windows 8.1. The 8-inch model (as shown above) weighs less than a pound, while the 10-inch model weighs 1.2 pounds. 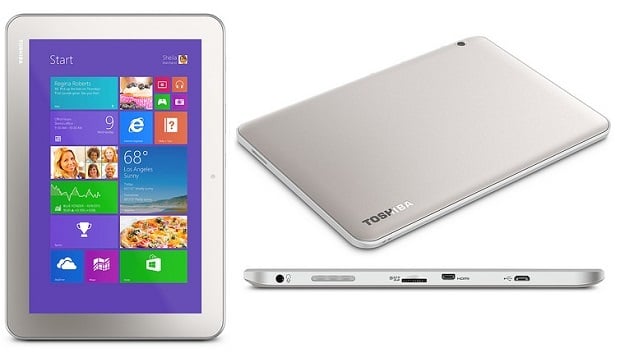 While mainly a device for entertainment, the 8-inch Toshiba Encore 2 comes preinstalled with Microsoft Office 365 Personal. This office productivity suite is also found in the 10-inch model (pictured above), which is marketed as both an entertainment and productivity powerhouse. There’s even an optional keyboard cover for the latter to make it a laptop replacement.

Other bundled software for both Toshiba Encore 2 tablets include Xbox Music and Video, Kindle Reader, and Skype. An app called TruCapture is also available that utilizes the cameras for enhanced captures of whiteboards, blackboards, and books. The resulting images are expected to have sharp, clear, and legible contents. The cameras are also capable of recording 720p (front) and 1080p (rear) high-definition videos.