This year they released a new air purifier called the Mi Air Purifier Pro which has an OLED display. The company wasn’t satisfied with cleaning the air only in your home or office, so they decided to also launch an air purifier for cars.

The Mi Car Air Purifier has a PM2.5 filter which rids the air inside your car of dust particles, pollen, and other

The air purifier has a CADR (Clean Air Delivery Rate) value of 60m3 per hour and is said to be able to clean up the air in a span of between 3-7 minutes. Seeing as the Mi Car Air Purifier lacks a display, you will have to control and monitor it via the Mi Home App. The air purifier uses a 2-wheel mirror fan circulation system to disperse clean air in all directions. It is also touted as having a noise level of 42-55 decibels. The design of the Mi Car Air Purifier is similar to that of a large Bluetooth speaker and can even pass for one at first glance. It’s available only in grey/black, though, so if your car’s interior is a color that contrasts sharply to it, it’s going to look really odd. Xiaomi ships the purifier with a headrest strap which you can use to mount it.

The Mi Car Air Purifier is launched under the Mijia brand which is a line focused on home accessories. It’s priced at 499 Yuan ($72) and will go on sale today on the Mi Store at 10:00 AM. Based on the specs of the Mi Air Car Purifier, it does have a lot going for it and can compete against other air purifiers like the Bosch AM601 and the Smartair330. 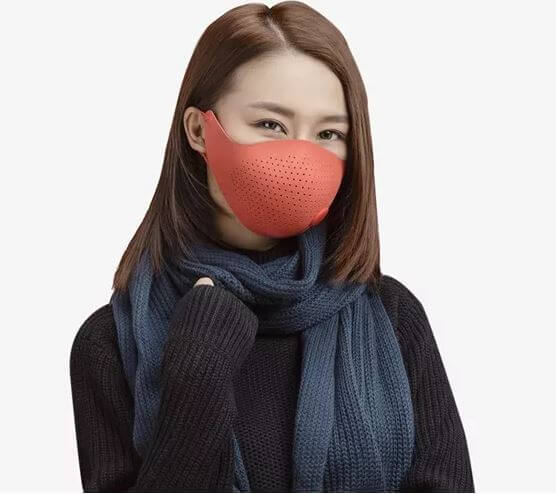 Aside from the car air purifier, Xiaomi also released an anti-pollution air mask under the Airwear brand which costs just 69 Yuan ($10) and should be great for those who do not own a car. The airwear mask uses replaceable air filters which can be bought for just 39 Yuan ($6).