OPPO previously posted a teaser of the upcoming revival of the Find series a week ago. Now, we’re given a sneak peek on how it would look like.

The OPPO Find X is rumored to be a real flagship, so we expect nothing but the best hardware around. It could potentially sport a bezel-less WQHD screen, top-of-the-line Snapdragon 845 chipset, and a dual camera system.

A new thread on Weibo reveals the design of the OPPO Find X. Unlike its midrange smartphones, the flagship has the camera on the center with LED flash and OPPO logo just below it. Since the front didn’t get any screen time, we’re not sure if there’s no fingerprint scanner or it’s placed in front. Another possibility is an in-display fingerprint sensor, although we don’t know if OPPO is working on that. 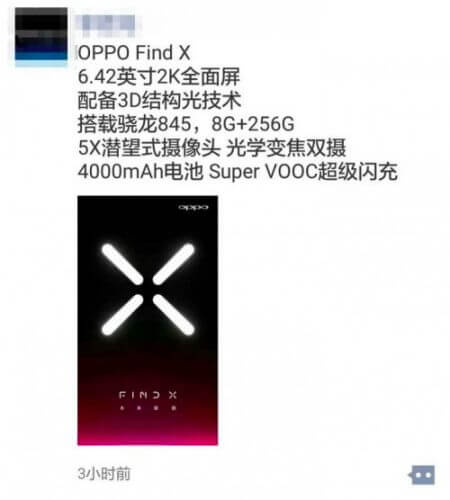 OPPO has not given any information regarding the specifications of the Find X, but speculations point to 8GB RAM and 256GB of onboard storage. The battery capacity is rumored to be 4,000mAh with SuprVOOC fast charging technology.

Lastly, people predict that it’s going to include 3D facial recognition and 5X optical zoom which the company revealed over a year ago.

As always, since nothing is official yet, take everything with a grain of salt.