First announced by Samsung last December, the new Samsung Galaxy A01 seems to be heading its way to the Philippines. NoypiGeeks first spotted this new entry-level smartphone in Samsung Philippines’ website earlier today. The link included the phone’s specs but unfortunately no price yet.

So far, we know that the Samsung Galaxy A01 features a 5.7-inch HD+ screen and a 720 x 1520 pixel display. It has an infinity-V notch at the center for the 5-megapixel selfie camera and it also comes with a dual-rear camera setup comprised of a 13-megapixel main shooter and 2-megapixel depth sensor.

The previously unknown chipset of the Samsung Galaxy A01 is now revealed to be the Snapdragon 439. The smartphone also comes with 2GB of RAM and 16GB of internal storage, which is expandable via microSD card up to 512GB. The device also has 3,000mAh battery capacity and there’s a face unlock feature for security purposes. 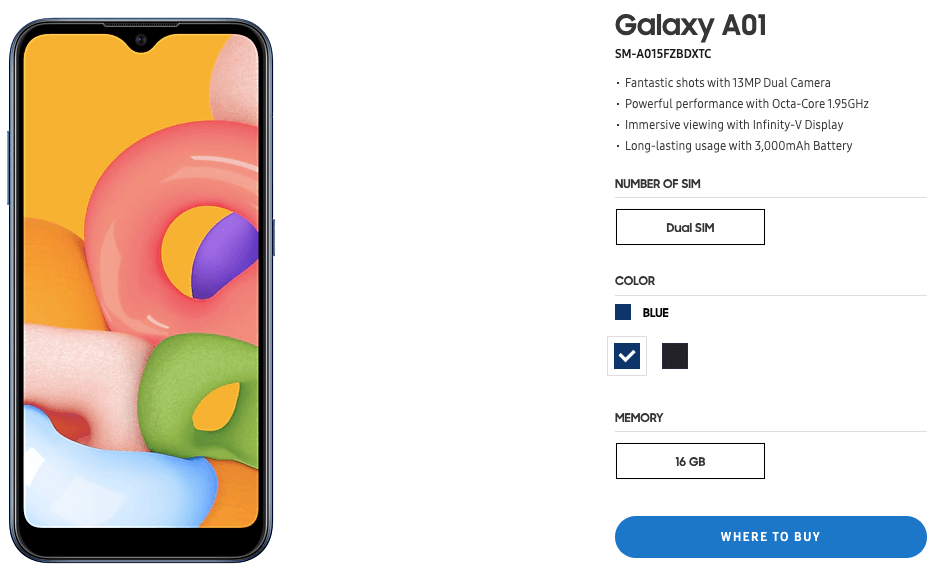 No official pricing in the Philippines yet for the Samsung Galaxy A01. But since it has already been launched in Vietnam for VDN 2,790,000 or around Php6,100 when converted directly, we can speculate that it will also be around that price tag. The phone is available in black, blue and red colors.