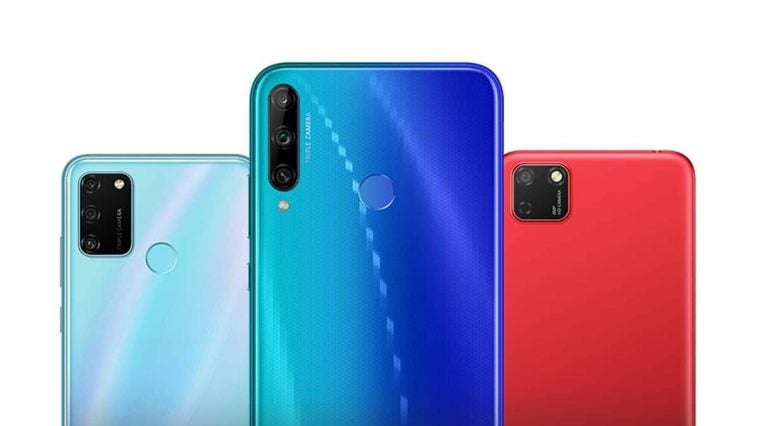 Let’s start with the most feature-packed of the three, the Honor 9C. This thing is powered by a Kirin 710A processor, with 4GB of RAM, 64GB of expandable storage, and comes with a 4,000mAh battery.

A 6.39-inch HD+ IPS screen populates the front, with a small punch-hole on the top left that houses the 8-megapixel selfie camera. A 48-megapixel main sensor is seen on the back, alongside an 8-megapixel ultra-wide shooter and a 2-megapixel depth sensor. You can also find the fingerprint scanner back here.

Next stop, we have the Honor 9A. This 6.3-inch device will come with a toned-down MediaTek Helio P22 octa-core processor, with 3GB of RAM, and 64GB of expandable storage.

It boasts a camera bump that’s similar to the Huawei P40 series, albeit only comes with a 13-megapixel main shooter, 5-megapixel (possibly ultra-wide), and a 2-megapixel depth sensor. There’s also a larger 5,000mAh battery to compensate for the underwhelming hardware.

Lastly, we have the most affordable of the three, the Honor 9S. This thing has a smaller 5.45-inch HD+ screen, a MediaTek Helio P22 processor, 2GB of RAM, and 32GB of expandable storage.

The thick bezels on top and bottom is a major throwback, with a 5-megapixel selfie camera on the top, and a single 8-megapixel camera on the back. And to keep the price even cheaper, the fingerprint scanner was removed.

The Honor 9S will be available for RUB6,990 (~Php4,800). No word yet about the devices’ availability in other markets.