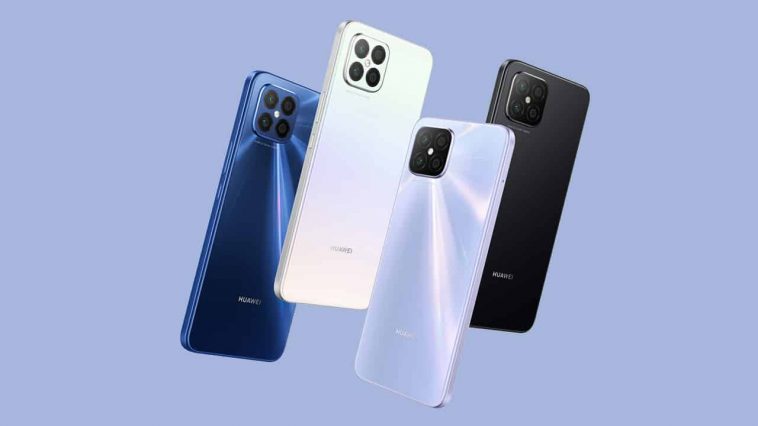 Huawei has released the new Nova 8 SE, a successor to the Nova 7 SE from last April.

Right away, you’d notice the influence of the latest iPhone 12 series on this device. The Huawei Nova 8 SE features a flat frame, which we expect to see in more Android phones in the coming months. It’s also relatively thin and compact as it’s only 7.46mm thick and only weighs 178 grams.

For some reason, Huawei went back to the notch instead of the more modern punch-hole design for the 16-megapixel selfie camera. That’s placed on top of the 6.53-inch FHD+ OLED screen, which comes with HDR10 support and a UD fingerprint scanner.

On the back, we have a sunrise design, with the quad cameras in a 2×2 layout inside a square camera glass. It consists of a 64-megapixel main shooter, 8-megapixel ultra-wide, two 2-megapixel sensors, and the LED flash in the middle.

The Huawei Nova 8 SE comes in two models. There’s a standard edition with a MediaTek Dimensity 720 processor, while the high edition has a more powerful Dimensity 800U chipset. Both models run on Android 10-based MIUI 10.1 with 8GB of RAM and 128GB of storage.

One of its key highlights is the ultra-fast 66W fast charging, which we initially saw on a Huawei device in the Mate 40 series. It can fully charge the device’s 3,800mAh battery in around 35 minutes.

The Huawei Nova 8 SE standard edition has a price of CNY2,599 (around Php18,900), while the high edition will be at CNY2,699 (around Php19,700). They will go on sale starting on November 11 in China. Its international release, including the Philippines, is yet to be announced.