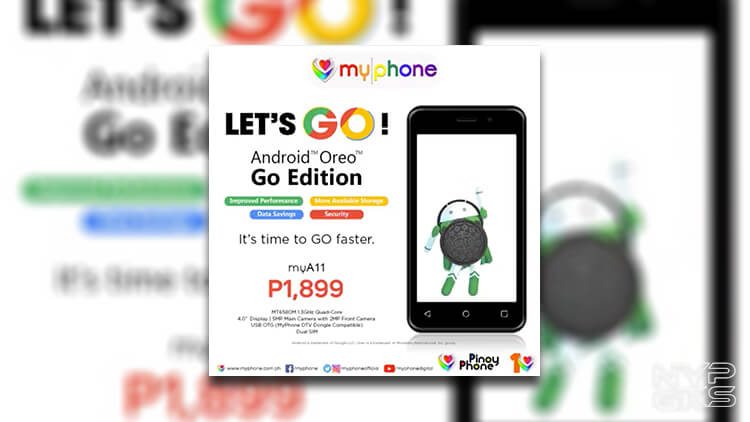 MyPhone joins Cherry Mobile in releasing an Android Go smartphone for the masses. This news is just fitting since this special project from Google was really meant to bring affordable smartphones to the people, without breaking the bank.

The MyPhone myA11 screams low-end smartphone all around. There’s a 4-inch display on the front with an undisclosed screen resolution and thick bezels.

It comes with a 1.3GHz MediaTek MT6580M quad-core processor with 512MB of RAM — the same combination that’s powering other Android Go-enabled smartphones in the market. But unlike the competition, the MyPhone myA11 only comes with 4GB of storage.

But since it runs on an Android Oreo Go Edition software, you can still expect a decent performance on this device. There are tons of applications that are tailored for this platform, so they perform well despite the low-end hardware.

They also come in small file sizes so it won’t hurt the limiting storage capacity. In addition, Android Go apps consume less data than the standard versions. So without a doubt, Google has this well thought out.

If you’re still interested, the rest of the specs include a 2-megapixel selfie camera, 5-megapixel main shooter, has USB OTG compatibility, and a 1400mAh battery. Unsurprisingly, it lacks 4G LTE connectivity, which can be a big deal-breaker for a lot of people.

The MyPhone myA11 has a dirt-cheap price tag of Php1,899. It will be available on all MyPhone stores, kiosks, and authorized dealers nationwide.