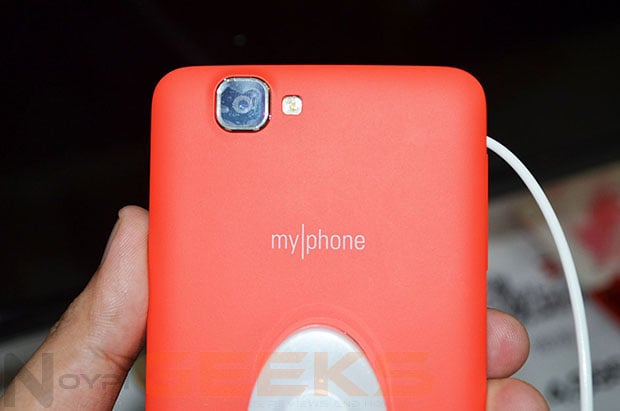 While the MyPhone Infinity was the star of the show a couple of months back, the MyPhone Rio could be the actual game changer. It may not have an octa core chipset or a fancy premium build, but it’s got some outrageously great internals for something that’s priced at Php5k.

For the money, you’re getting a 5 inch HD IPS display, 1.3GHz quad core processor, and a choice between red, orange, yellow, black, blue and white back covers. To put things into perspective, the Kata i3 sports the same screen and chipset while retailing for Php3k+ more! I managed to get some hands on time with the Rio at Allphones’ 50th store launch at Robinsons Galleria. Here are my impressions. The MyPhone Rio’s 5 inch HD IPS screen is comparable to some local flagship phones from a year back that used to cost twice as much. The contrast is not as good, leading to a lack of punchiness, but at Php5k I’m not complaining. The clarity is still quite excellent though. The Rio runs Android 4.2 Jelly Bean out of the box. The differences between stock Android are mostly cosmetic, with the Rio sporting MyPhone-themed icons and wallpapers that lend it a different look. The navigation and basic operation are still the same though.

The MyPhone Rio is driven by a 1.3GHz quad core MediaTek MT6582 system-on-a-chip (SoC), which is an upgrade over the previous generation’s MT6589. The MT6582 is 100MHz faster than the MT6589 of old and is coupled with a dual core Mali 400 GPU. The Mali 400 may be an older GPU, but it’s still capable of rendering better visuals compared to the PowerVR SGX544 GPU that was coupled with the MT6589. Aside from that, the Rio comes with 1GB RAM. It’s the recommended amount of RAM for Jelly Bean devices, although there are still some that try to force it with just 512MB RAM. I’m certainly surprised that MyPhone was able to cram 1GB RAM on the Rio considering the screen is already quite good at this price point.

Overall, the performance is comparable to phones like the Samsung Galaxy S3, at least, if Antutu is to be believed. Not bad for Php5k, eh?

If MyPhone manages to keep the price at Php5k, I’ll be quite pleased. The hardware is so much better than you can typically get at this price point and will make higher performing phones more accessible to the masses :)