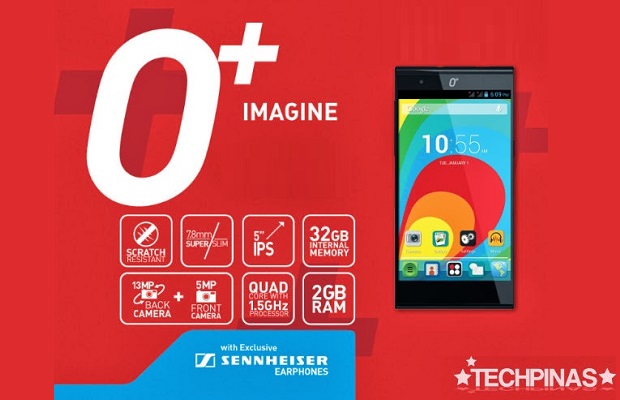 Though O+ USA has yet to release an official announcement, its latest and (most likely) last flagship for 2013 has already surfaced online.

The company surely will end this year with a bang. For one thing, they will be introducing this specs beast that is slightly on par with the likes of the LG G2 (but not on the CPU though). Similar to the Korean tech giant’s offering, the O+ Imagine comes packing 2GB of RAM, 32GB non-expandable internal storage, and a 13-megapixel rear camera. In lieu of a fast Snapdragon processor, though, is a still capable MediaTek MT6589T CPU that’s clocked at 1.5GHz, accompanied by a PowerVR SGX 544MP graphics processor.

Meanwhile, watching movies and playing games should be a visual delight thanks to the 5-inch LCD with in-plane switching (IPS) technology for wide-angle viewing. Screen resolution is specified to be in full HD, which should give O+ Imagine a high rate in pixel density of 441ppi. Multiple inputs can be readily picked up on with the 5-point capacitive touchscreen. Though the preinstalled Jelly Bean OS comes with very few UI modifications, nifty gestures have been added for convenience. For one, the home button can be pressed twice in quick succession to turn on/off the display and unlock/lock the phone. For another, switching between apps is a cinch by simply swiping left and right.

I think the best feature of the O Plus Imagine is the glass-metal-glass design which we usually see on Sony’s flagship Xperia handsets. This type of build quality is far superior and feels like a really premium device than the usual plastic materials used on O+ 8.16 and 8.15. It also has a very noticeable incredibly thin bezels.

If the source of the leak is to be believed, the O+ Imagine will be ready for release for the holidays, when shoppers are looking for ideal tech gifts to give their loved ones. The suggested retail price is Php18,995, although O+ USA will reportedly be slashing the price by as much as Php2,000 as part of the phone’s introductory promo. Making things even more interesting are the pair of Sennheiser Earphones that come freely bundled with every unit.