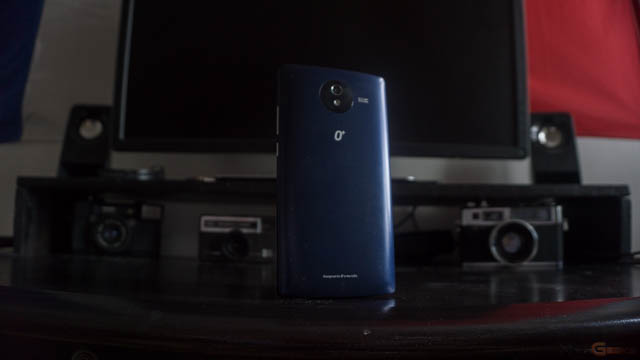 O+ outs two new devices a few months back. Devices that have familiar names; which were the O+ Upsized and the O+ Venti. Does it ring a bell, coffee aficionados? These titles came from large coffee drink serving sizes.

And just like what it portrays, these two new devices are a bit on the enormous side. Or as how we address it on the tech space, phablets. But, it doesn’t stop there. O+ really wants the users to “Live Big” by including a free Sandisk 32GB microSD card inside, which makes both devices capable of storing 40GB of files. For today, we’re taking a closer look at the O+ Venti.

Does this device justify its Php6,395 price tag? An asking price that is quite assuming, in contrast to its targeted competition. Let’s figure that out.

The Venti’s overall aesthetics is really refreshing. It is a real departure from O+’s usual design language. It sure is still made primarily of plastic, but this time around, the use of plastic is really forgivable, considering how good looking it is.

The front quite resembles the flagship HTC devices, with its two front-facing speaker grills. However, the bottom one is the only actual loudspeaker, the one at the top only houses the earpiece for calls. And since we’re here, let us talk about the loudspeaker, which is not that good for our taste. Sound quality is fair, but the volume is just too low. Thankfully, it is in the front, so we can fully utilize its potential.

I also loved the semi-rounded corners, the breathing LED notification indicator at the bottom, the textured rounded design accent that surrounds the camera and the flash, and the color variant that we have, which is the Dark Blue. Thank God it’s not the Rose Gold, which is the only other option.

This is where things start to get disappointing. On the Php5k to Php10k price range, we can do expect a 1080p display, with a 720p as the worst case scenario. What I didn’t expect is that we can still get something worse than that. The O+ Venti features a qHD display, not to confuse with the high-end QHD one which has a 2560 x 1440 pixel resolution. That’s far south from a 1080p, or even a 720p display. However, sharpness is really not that bad. The difference is hardly noticeable when compared to a 720p panel. Besides, the bigger the display, the farther we look at it.

Processing performance is something to be expected. Games ran okay, thanks to its pretty powerful processor and graphics card, but opening a game is a different story. It takes a full two to three seconds before an app starts when multitasking, thanks to its small RAM. For casual social media browsing and multitasking, it can also perform very well.

The O+ Venti runs on Android 5.1 Lollipop. Thankfully, just like all of the company’s devices, it’s dressed in full stock-Android interface. No fuss, no nonsense shenanigans.

Probably the only hurdle I saw, and this is actually a shared problem to almost all Android devices, is the existence of bloatwares. Not only that it takes precious storage space, but it also results in some applications having duplicates, which is a real eyesore. There are two Camera app, Calendar, different internet browsers, and photo gallery. Some Android manufacturers have already addressed this issue by giving way to Google’s native apps and refraining from trying to push their own.

But nonetheless, User-experience is pretty much okay. The entire UI is generally smooth and fluid. And if we’re judging the interface itself, there’s nothing to complain about.

Of course, let’s not forget the Air Shuffle. Which lets you control the FM Radio, Music, Gallery and Camera by hovering your palm at the display. Off-screen gestures are also present, which lets you draw letters while the display is off which corresponds to an app shortcut. Double-tap to wake is also here.

The O Plus Venti boasts an 8-megapixel primary camera, and a 5-megapixel front-facing one. Image quality is not something to brag about – it take decent to impressive photos, but nothing too special about it.

The sensor used is very identical, if not the same, to almost all 8-megapixel shooter on this price range. We’ve seen a lot of this before, and we’re seeing it again. Colors are middling, contrast is just okay; sharpness is impressive, although zooming in reveals a lot of software manipulation. But what surprised me is the impressive dynamic range. Dark areas are still present without overblowing the highlights.

The front-facing camera does a satisfying job. The images sure aren’t sharp, but it is bright with decent color reproduction, which makes it perfect for video calls, even in low-light scenarios. It can also take acceptable selfies, depending on your tolerance. During my tests, Bluetooth 4.0 was pretty reliable. I have tried connecting the device to a wireless speaker and showed no disconnection or track stutters. The WiFi also didn’t drop even on long range.

4G LTE also worked well. Speeds may really vary depending on your location. On my test, I’ve used a Smart 4G LTE sim and was able to get download speeds of 12mbps, up to 23.94mbps. You can check the screenshot for some speed test results.

The Venti has a pretty substantial battery capacity, something that isn’t really surprising for a phablet like this. We do have a large 3,00mAh non-removable battery. Yup, despite the back cover being removable, O+ still decided to screw it in and hide the module.

Battery performance is not that impressive, but it’s quite good. Screen-on time exceeded our 4-four passing mark, but not by a large margin. While light to moderate usage lasted the device a whole day, it sure needs to be recharged every night.

O+ USA is definitely one of the most trusted brands here in the local market. With their distinct combination of quality, hardware, and price – they’ve captured the hearts of the consumers. The O+ Venti has a refreshing new design and a large display, and that is perfect for people who are really in the market for large devices. It’s a ginormous phablet that has a capable processor, but the 1GB of RAM under the hood is really hitting the performance.

But on the brighter side, the O+ Venti offers 4G LTE,  Android Lollipop, a free 32GB microSD card, and the said large 6” display. If you’re an O+ USA phone, then this one’s for you. O+ USAO+ VentiPrice and availability of O Plus Venti