It took a few good months, but at least it’s now here in the Philippines. The OPPO A57 was announced late last year, and it only arrived this June.

But, was it worth the wait? Does OPPO’s newest midrange smartphone deliver? Or is it going to be another overrated, overpriced, iPhone copycat? Let’s figure that out.

Writing this part of an OPPO review is starting to be a tiring and repetitive job. If you’re familiar with the looks of their previous smartphones, you’ll notice that almost all of them have the same looks. And the OPPO A57 is no exemption. This thing looks pretty much the same as the OPPO A39, F1s, and even their current flagships.

With that said, the OPPO A57 retains the boring (but battle-tested), all-metal, iPhone-ish look. The unibody build did make it feel sturdy and elegant, but I wish OPPO would go back to the drawing board next time. This new Black Edition variant made it look a tiny bit refreshing, but still, there’s almost no way of telling the difference between the smartphone siblings for the average joe. 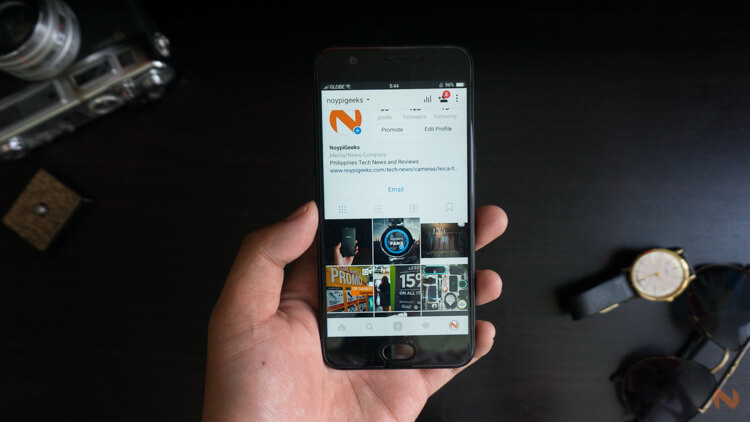 But nonetheless, like I said earlier, it’s built robustly. It has some noticeable weight to it, but nothing that’s not bearable. People with small hands might struggle on using this singlehandedly, but it’s 5.2-inch profile still offers better ergonomics than most 5.5-inch devices these days.

The OPPO A57 comes complete with all the necessary ports and slots. The device features a long tray that houses two nano SIM cards and a microSD card — no hybrids, no compromises. Below the platter is the lock/power switch, in-parallel with the volume controls on the other side. The buttons have the same thin and metal-built profile that compliments the handset. They feel tactile as expected, but they don’t offer the best satisfaction when pressed. 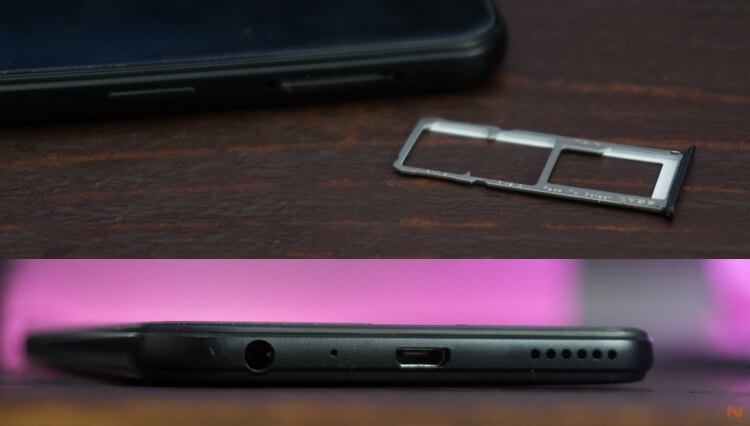 At the bottom, we have the microUSB port and a 3.5mm headphone jack. Next to them is the built-in microphone and loudspeaker. The speaker drivers offer decent sound, with enough volume and balanced tones.

Taking a look at the back, we have the 16-megapixel primary camera, coupled with a dual-tone flash. You can also spot the secondary microphone for noise cancellation. The shiny OPPO logo engraved in metal is also nicely placed in here, which does shine better in this black variant. 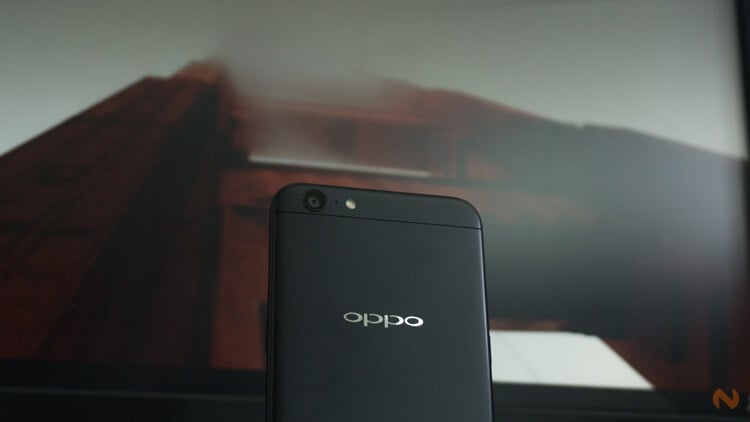 Going for a metal build in lieu of glass might save you from the annoying fingerprint marks, but it sure ain’t safe in attracting smudges. Bad news for those who have sweaty hands. But don’t worry too much, though. OPPO included a free transparent jelly case out of the box to safeguard the handset from any dangerous elements.

This is where the OPPO A57’s midrange-iness shows up. The phone does have a 5.2-inch HD IPS display, but only has an HD resolution of 1280 x 720. Quality wise, there’s really nothing to complain about this one. Not unless you’re really that finicky. 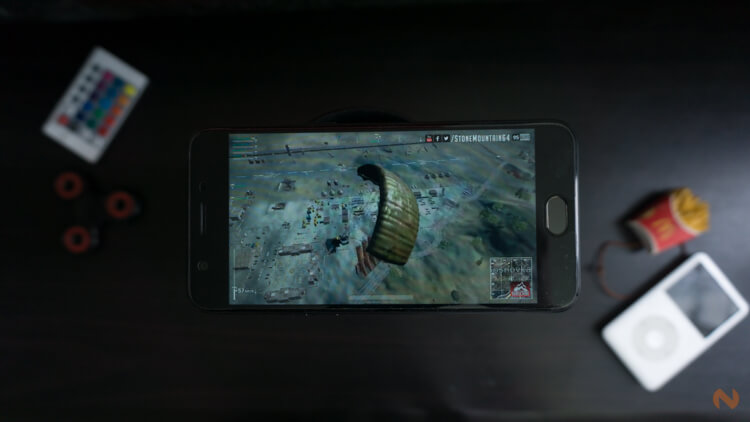 With that said, the colors are decent. The contrast is really good with deep blacks. And surprisingly, the sharpness is acceptable. The 720p resolution on a 5.2-inch still equates to 282 pixels-per-inch — not too shabby.

The backlighting can also get too strong, making the display a bit excessively bright. This makes the OPPO A57 usable outside even at broad daylight. In case you find it too bright, you can easily dim it via the drop down notification settings.

Like I said earlier, the F3 and F3 Plus are OPPO’s current flagships, not the A57. But neither of them sports the best-in-class processor that’s out today. Hence, don’t be surprised when I tell you that this thing only runs on Qualcomm’s Snapdragon 425. A chip intended for budget devices. It features a 1.95GHz octa-core processor, with 3GB of RAM and an Adreno 510 GPU.

But don’t be fooled by its “budget” processor. As per my tests, the OPPO A57 was able to handle every task that I throw at it. It might have projected some struggles, but it was able to push through. Even mobile games like NBA Live and Real Racing 3 were playable and enjoyable with decent frame rates.

The 3GB of RAM also did some showing off during my tests. Opening apps and switching between them was fairly speedy. It might encounter a second or two to start, but that’s more like the interface’s fault, or the app itself. 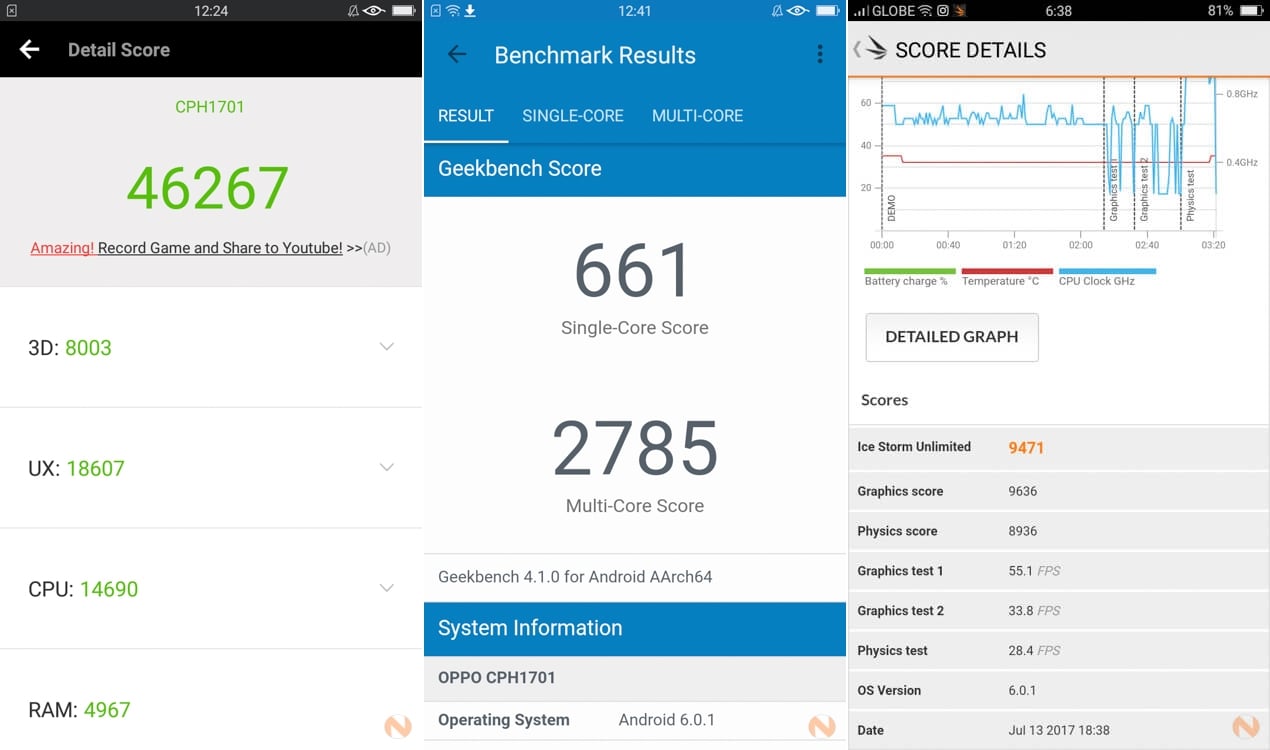 Here’s yet another repetitive part of every OPPO review that we’ve done. However, I actually don’t mind doing another repeat on this part. If you’ve read the previous ones, you’ll know how much I loved the fingerprint scanner that the company utilizes on their devices. As expected, the one on the OPPO A57 is also top notch.

Just like the others, the scanner is embedded on the home button. Which, ironically, isn’t an actual mechanical button. The “button” is actually just the sensor itself. Tapping it will provide the functions you would get from a standard home button (i.e holding it launches the Google Assistant). 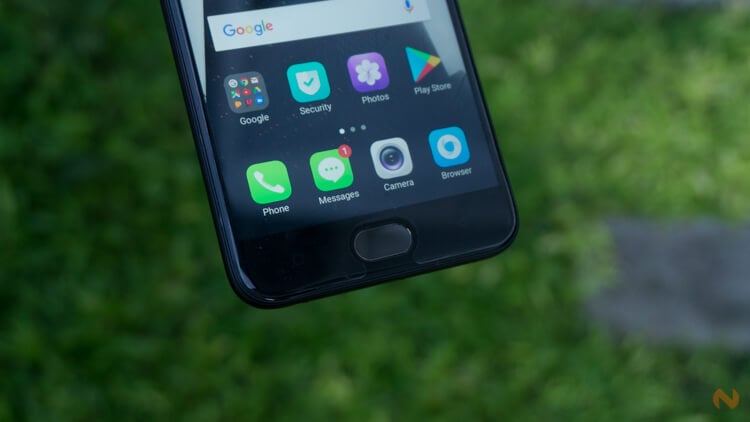 But more than that, it also works as a great fingerprint scanner. It’s even one of the best that I have used in a while. It instantly unlocks the device with just a quick tap of a finger, with almost 90% success rate. I can’t even remember an instance where I had to use the lock screen pattern when it fails to register my finger. It just works.

The OPPO A57 might run in a painfully outdated Android 6.0.1 Marshmallow version, but you’ll barely notice it due to its thick ColorOS v3.0.0i interface.

OPPO own interface took a lot of design inspiration from the iOS, just like what they did in the design. The native app icons, fonts, and the overall minimalistic feel — all of which were pioneered by Apple. It might not be against anyone’s morale, but it sure is good for business as a lot of consumers really do admire this layout. 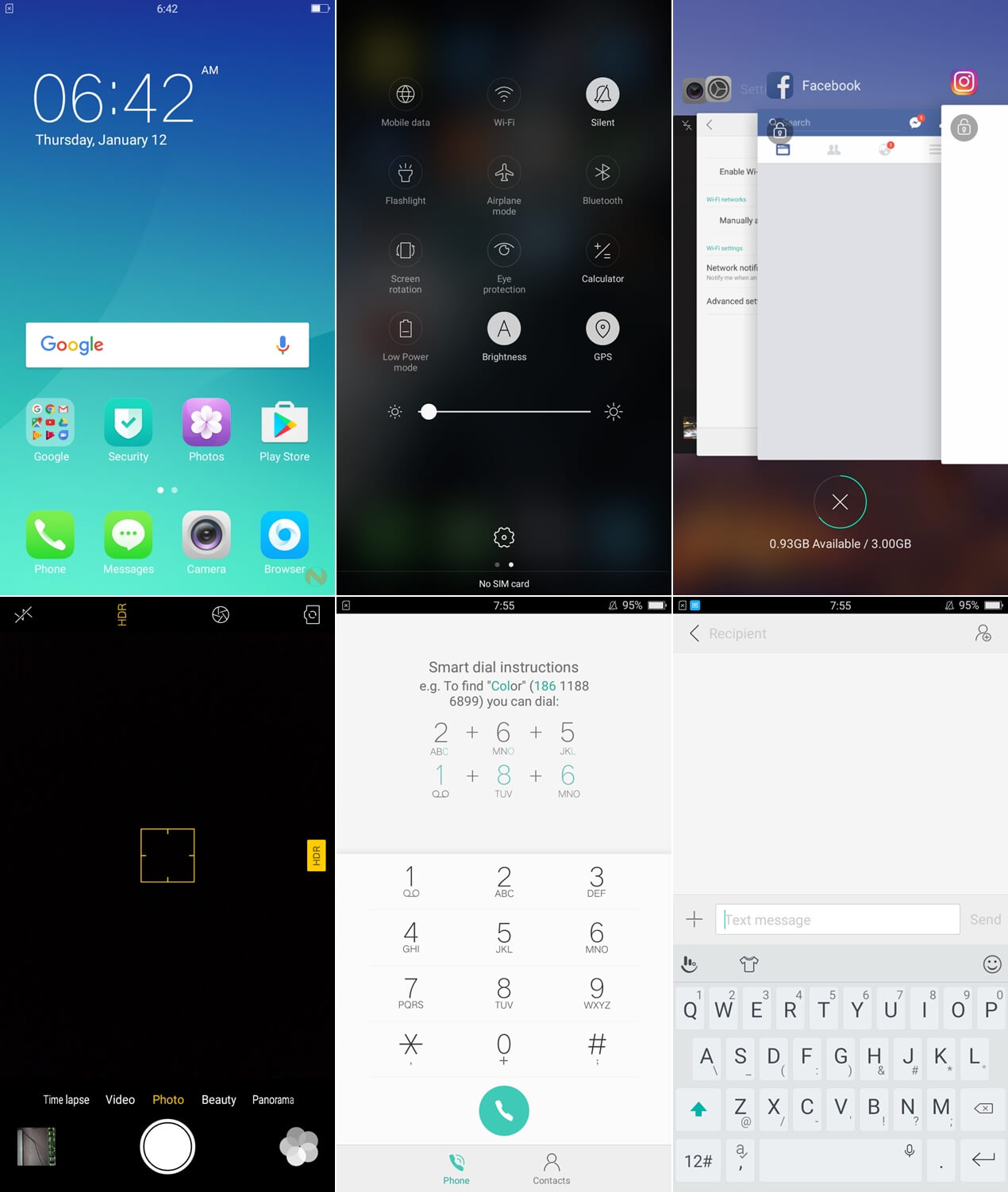 However, an operating system is more than just the visible interface. You might not see it, but having an outdated software version removes your chances to experience the benefits of Android’s latest Nougat version.

Unlike its flagship brethren and pretty much almost all of its competing devices, the OPPO A57 lacks a dual-camera setup. A feature that has become a standard to most devices that are coming out today. But to compensate, OPPO rigged the A57 with a 13-megapixel shooter at the back, and a 16-megapixel camera on the front to make it nonpartisan to its “Selfie Expert” brothers.

The primary camera at the back can take great and acceptable photos. It sure is not the best, but the pictures you can take are still “Instagramable”. The OPPO A57 can take good photos at good lighting as well. When shooting in Auto Mode, the images taken look sharp, with just the right contrast and saturation. Keep in mind though that a simple exposure adjustment when shooting can greatly make a difference.

But it’s not the same case in terms of low-light scenarios where the OPPO A57 isn’t so good. A huge amount of detail is compromised, but still nothing too serious. You can still pretty much nail a night-out photo op for as long as you’re patient with adjusting the focus and exposure. But if you’re all about run-and-gun, then this might really disappoint.

Now let’s head on to the most critical and important of any 2017 smartphone review — the front-facing selfie camera. And if you’re really all about taking self-portraits, then you might be looking at your next smartphone.

The 16-megapixel selfie shooter on the OPPO A57 performed a satisfactory job on my tests. It sure is not the best (its bigger brothers are better), but then again, good enough to take “Instagramable” pictures. OPPO might have compromised and removed the secondary wide-angle camera, but I still managed to fit a couple of friends in the frame.

Each selfies / groufies taken delivers great brightness — so great that the exposure can be overblown at times. Colors are also good, although the contrast is a bit disappointing. Furthermore, the sharpness and details are also a bit awful. The images might appear bright and visible, but taking a closer look you’ll notice how soft and dull the details are. This might be because of the Beautify mode being turned on.

Both its WiFi and Bluetooth antennas might not be the latest versions, but it was still able to get the job done. The device was able to maintain a good connection with our wireless home network wherever I am around the house. Connecting the OPPO A57 to my wireless speakers and headphones was also seamless.

The 4G LTE connectivity was also reliable. For as long as your area has 4G reception, you’re pretty much good to go.

However, it looks like OPPO is still taking its good, sweet time in traveling to the future. Earlier, we’ve stated that the OPPO A57 only runs on Android Marshmallow. And now, it looks like the company is still turning a blind eye to the USB Type-C revolution.

Almost all of the smartphone manufacturer today has already adopted the implementation to either one or two of their latest release. But OPPO, for some reason, doesn’t show any interest in USB Type-C. Even their latest R11 line doesn’t sport it.

This move might benefit the consumer, as they might have a lot of spare microUSBs lying around ready as a backup. However, the gaining popularity of the new standard suggests that it really is the future.

Almost all of the OPPO devices that we have tested garnered a passing mark in the battery department. The A57 also has great uptime.

Inside we have the non-removable 2900mAh Li-Ion battery. A capacity that’s fair enough to complement its low power HD display and efficient Snapdragon 435 processor.

Performance wise, the OPPO A57 was able to last me for more than a day. I used the device for casual web browsing, streaming videos online, and using social media applications like Facebook and Instagram.

I also ran PCMark’s battery test that simulates dailt tasks until the battery percentage reaches 20%. It then took the app 5 hours and 18 minutes before it reached the limit. 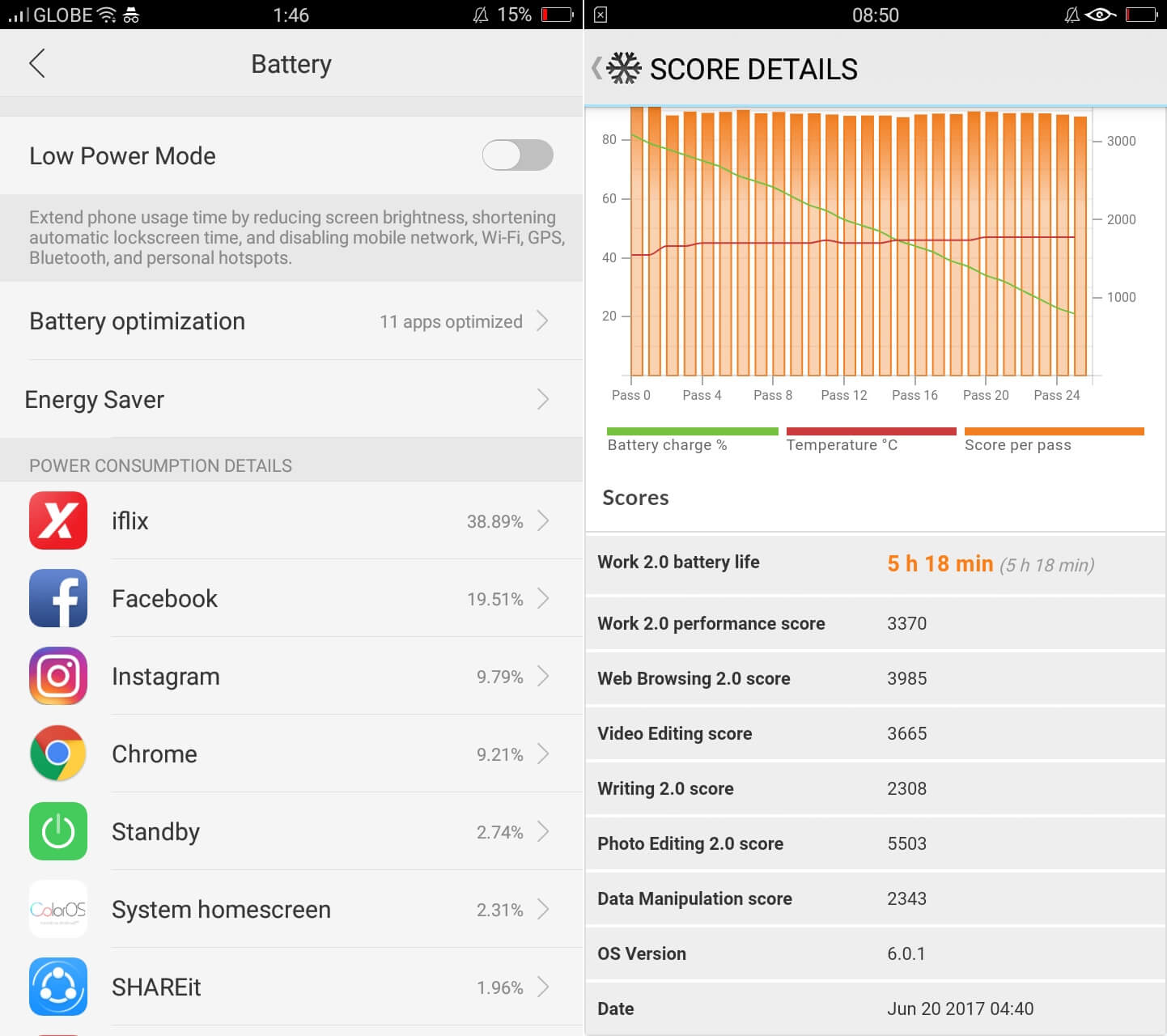 Unlike their other offerings, it looks like OPPO finally got the sweet spot with the A57. Compared to the F3 and F3 Plus, the A57 is a bit more reasonably priced. However, there are still a lot of better alternatives out there if you’re looking for a phone in this price range. But at least, the A57 is a foot forward to the right direction.

The smartphone might have the same, boring look, but the sturdy build was also maintained. The device also has a capable processor that’s ideal for multitasking, and gaming that’s projected to its modest 720p screen.

Moreover, some of the OPPO A57’s worth-noting features include the ever-so-fast fingerprint scanner, good battery life, and clean interface. 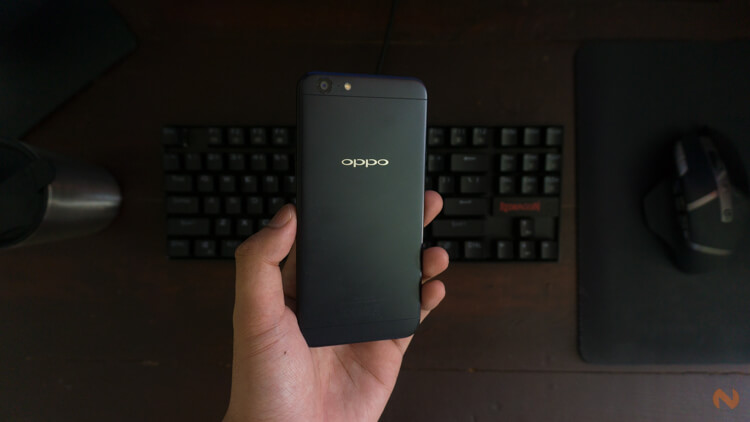 However, the OPPO A57 software is also one of its major weakness. Their ColorOS interface might be able to hide it, but no one can still deny the fact that it only runs on Android 6.0 Marshmallow. This can be a big deal breaker to avid Android fanboys.

OPPO has been pushing the A57 as a handset for “Unstoppable Selfies”, but its picture-taking capabilities aren’t its only forte.

Pricing and availability of OPPO A57

The OPPO A57 is currently available for Php11,999 in all OPPO stores and kiosks, as well as third-party retailers in both online and in malls. Along with other OPPO devices, the unit can also be purchased at Shopee for the same price, with FREE shipping and Cash on Delivery payment option.