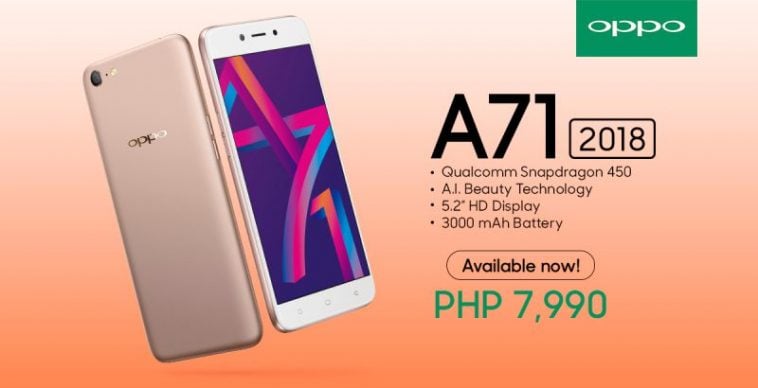 Today, the OPPO A71 (2018) is now available in OPPO stores and resellers nationwide.

This smartphone offers extreme value for money mainly because of its speedy processor, which is often seen in midrange handsets. For comparison, the Vivo V7 which is equipped with the same CPU costs Php12,990. However, it’s not without its flaws.

While it may have an advantage in processing power against other budget smartphones, the OPPO A71 (2018) only has 2GB of RAM. This means that it will be limited when it comes to multitasking several things at once. The chipset will definitely make up for it one way or another, but having more RAM is still preferred.

Anyway, for its low price of Php7,990, we can’t really complain. In fact, it’s probably one of the best deals in its price range right now. The 5.2-inch 720p screen isn’t too bad either, as it’s a sweet spot for those who don’t want to carry around a huge smartphone.

Even though the OPPO A71 (2018) is not a member of the F-series, it’s still able to inherit the Artificial Intelligence (AI) powered Beauty mode feature. It’s the company’s newest trick up its sleeves in dealing with the consumers’ selfies. The AI built-in analyzes the face of the user to adjust the camera settings appropriately.

In terms of security, it seems like is going the Apple way by completely removing the fingerprint altogether. Like the A83, this device relies solely on the facial unlock feature to quickly it from sleep.

Again, the OPPO A71 (2018) can now be purchased on all OPPO stores, kiosks, and authorized dealers nationwide.