Midrange smartphones offer the perfect sweet spot for the Asian market, especially here in the Philippines. It’s the same reason why it achieved success here in the country.

Both the likes of OPPO and Vivo have harnessed this fact. Partnered with intensive marketing muscle, their smartphones can now be seen in the hands of a lot of people.

And with the Vivo V7, it seems that Vivo wants you to turn to their brand, in case the V7+ didn’t convince you to do so.

But will the V7 finally make you switch? Or is it another pass? Read on.

The Vivo V7 is a complete replica of its older brother, the V7+. If it weren’t for the smaller screen, you can really not tell the difference between the two.

The V7 has the same plastic build at the back, so don’t be fooled by its metallic look. The antenna bands on top and bottom have the same shape with the iPhones. However, they do have a shiny tint so we’ll give it a pass. 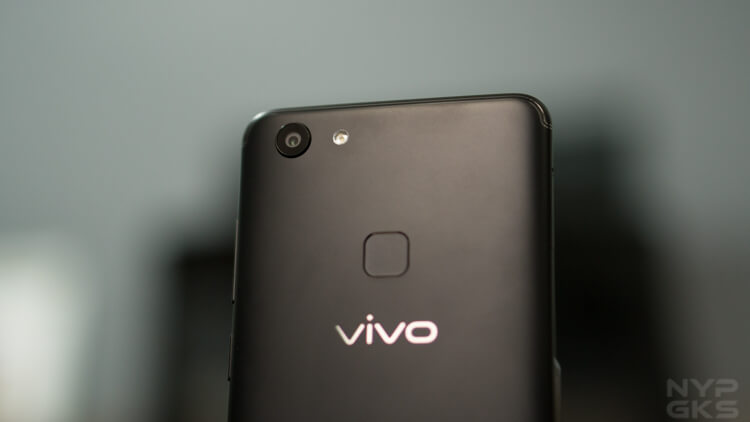 It also retains the curved back and edges, which is really common to most handsets today. It gives better comfort and improves ergonomics when holding the device. Plus, since it has a smaller screen, I find the Vivo V7 more comfortable in the hands than the larger V7+.

Quite noticeably, the phone also feels lighter. This is probably due to the smaller battery inside it. The device’s highlight feature is seen right in front. It packs a 5.7-inch FullView screen with its 18:9 aspect ratio and ultra-thin bezels. The front of the device is mostly populated by the screen, which, in return, provides a pretty striking look. So make sure that your wallpaper looks dope to take advantage of it. 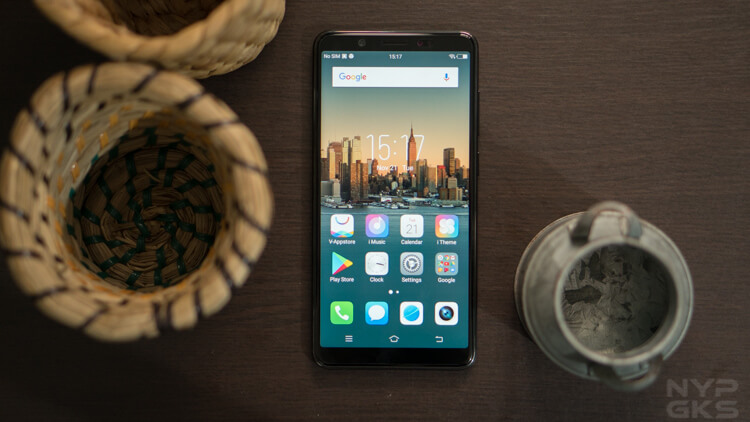 The top corner houses the earpiece, a 24-megapixel front camera, LED flash, proximity and ambient light sensor. Now that the bottom bezel is really thin, the capacitive buttons were morphed into on-screen keys.

And just like what most manufacturers are doing, the fingerprint scanner has been relocated to the back, just within reach of your index finger.

Overall, I’m pretty satisfied with the Vivo V7’s design. But the thing is, the Huawei Nova 2i has set the standard really high with its all-metal build. So clearly, the V7 still has a lot of catching up to do in this department.

Other than the design, the Vivo V7 was also left behind by the competition in the display department. For some reason, Vivo only managed to come up with an HD+ resolution to its 5.7-inch IPS screen. That’s only 1440 x 720 pixels stretched to accommodate the large display.

For comparison, a rival like the OPPO F5 Youth is already boasting a sharper FHD+. It even has a bigger size, which is at 6-inches.

The difference between the two resolutions is barely noticeable. But if you look closely, especially on small texts, the individual pixels are more distinct on an HD+ screen. 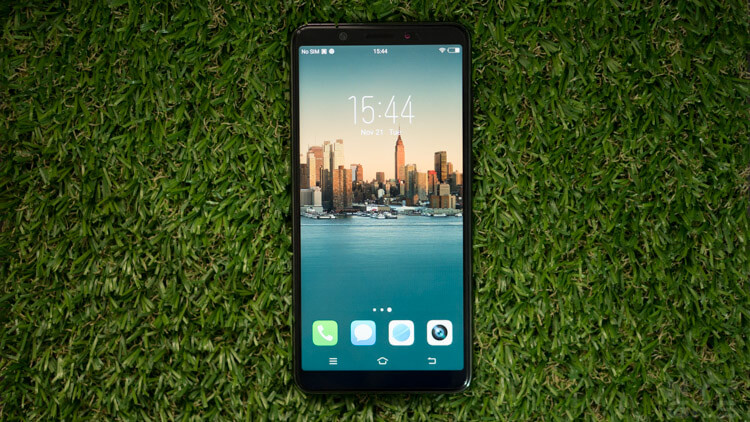 But if you can get past the slightly failing sharpness, the display does offer good and natural colors. The saturation is also well modulated with no yellowish tone that we see on other devices.

Its tall and wide 18:9 aspect ratio also provides a more immersive viewing experience. It can easily project an entire webpage, so you don’t have to scroll a lot when you’re reading an article.

Besides having a smaller display, the Vivo V7 also didn’t get the dedicated HiFi audio chip that the V7+ has. But despite that, the difference in sound quality is really indiscernible.

The sound blasting from a plugged in headphones was loud, with good clarity, and pronounced bass and treble levels.

But if a headphone is not within reach, the bottom-firing loudspeakers also deliver impressive performance. The volume is loud, the bass is audible, and the treble is pretty clean.

Vivo used the same Qualcomm Snapdragon 450 chipset from the V7+ to the V7. And even with the slightly cheaper price tag, the use of such processor is still hardly justifiable.

This smartphone is an eight-core workhorse that’s supported by 4GB of RAM, Adreno 506 GPU, and 32GB of internal storage that can go up to 256GB.

The Vivo V7 delivers usable performance overall, but nothing that can blow you away. Basic apps and day-to-day smartphone activities were handled decently. However, you can expect a lot of occasional hiccups and lags, especially on intensive apps and games. 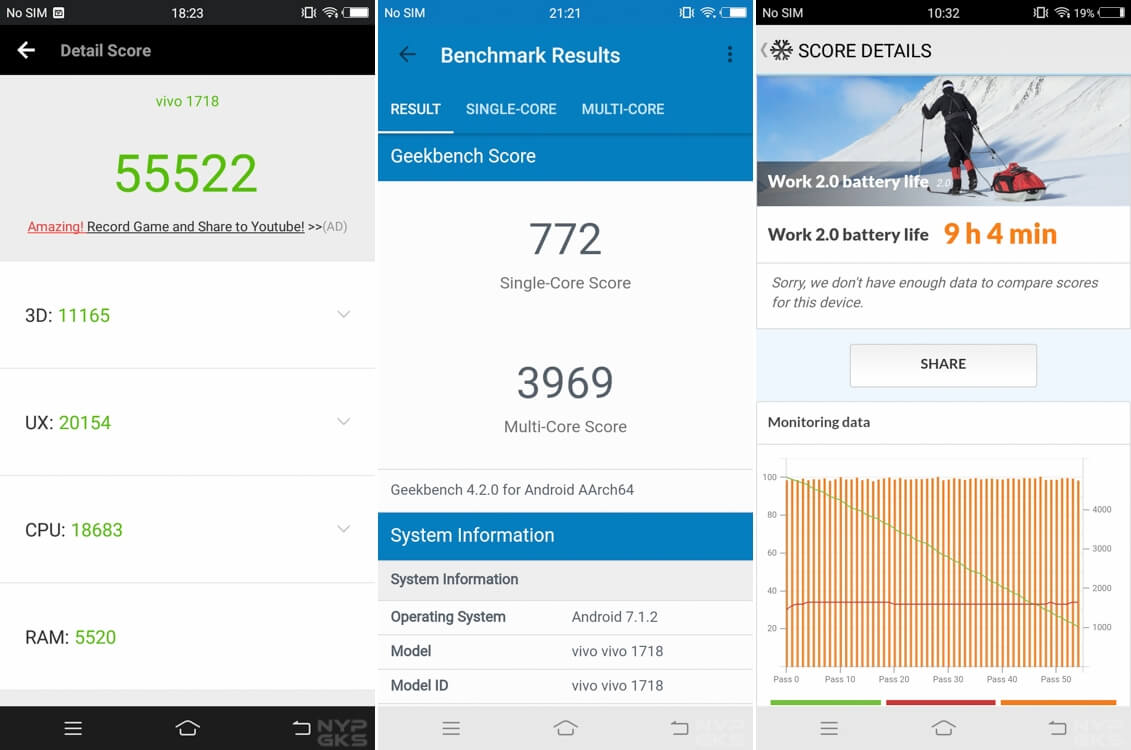 It can also handle a lot of game titles well. Both Need For Speed: No Limits and NBA Live ran at decent frame rates, but then again, you can expect some minor lags here and there. I could say that it’s pretty enjoyable considering its large screen.

Just like most of the competition, the Vivo V7 is equipped with two, slightly advanced, security features.

First, we have the fingerprint scanner. And thanks to its almost-borderless nature, Vivo was forced to relocate the said sensor. It’s now placed at the back, right within your index finger’s reach for easy access.

The fingerprint scanner works really well. It has almost a 90% success rate of detecting my fingerprint right, and it unlocks incredibly fast. 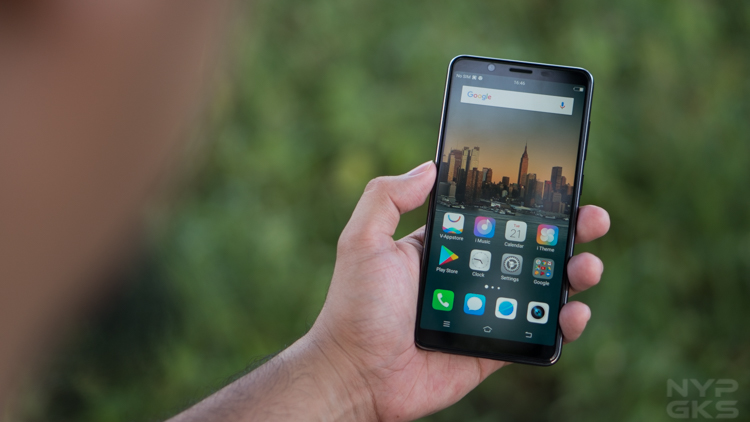 But if using a fingerprint as a form of authentication is old technology for you, you can also use its facial recognition feature. This utilizes the Vivo V7’s 24-megapixel camera to detect if it’s really you who’s trying to access the device.

The Vivo V7 runs on Android 7.1 Nougat, coupled with Vivo’s own FunTouch OS 3.2. I would still pick Android’s native look any time of the day, but I guess we’ll just have to get used to seeing this kind of alterations.

The FunTouch OS 3.2 isn’t the cleanest manufacturer-made interface around, but it will do. This new version allows the users to further utilize the device’s wide, FullView screen while also incorporating some design queues that’s a signature of Vivo. The control center at the bottom houses all the basic commands and shortcuts, so you can toggle any of them within reach. Meanwhile, the top is where your unseen notifications rest on their own. You can also swipe down from the home screen to reveal the worldwide search, which can show suggestions locally (Apps, Files, etc.) and via the web. 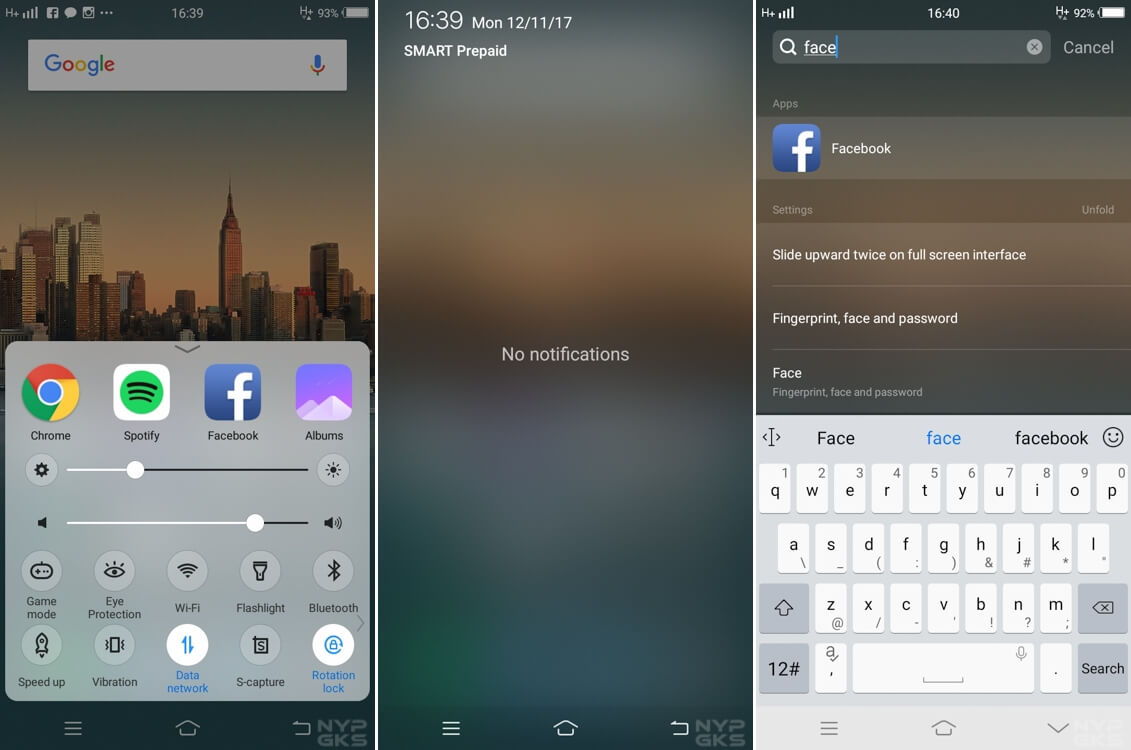 FunTouch OS 3.2 also brings other nifty features to the Vivo V7. Some of which are becoming a standard issue to most devices today.  We have smart motion and off-screen gesture commands, one-hand mode, App Clone for easily multi-account management, and Smart Click (Pressing the volume down while the screen off enables a command of choice). 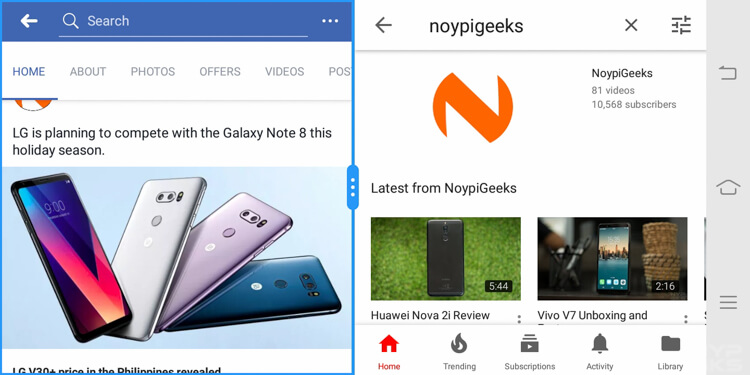 And of course, we have the Split Screen mode. This allows you to further utilize the wide screen real-estate by using two apps at once, side by side.

The FunTouch OS 3.2 might not be the most flawless Android skin around, but it does manage to bring out the best in the Vivo V7. Let’s just hope that the device will get continued updates in the future, although that’s highly unlikely given their track record.

In their recent releases, Vivo has proven that they have mastered the art of selfies. Other than us, a lot of people who have owned a recent Vivo smartphone can attest to that claim. And if you’re one of those people, you would also like this one.

Just like the V7+, the Vivo V7 brags a 24-megapixel front-facing camera. These devices have one of the highest selfie camera resolutions around. Combined with its Face Beauty 7.0, the V7 can indeed take Instagram-able self-portraits.

The camera can take really sharp photos, with natural tones, and a slightly off but acceptable contrast. The 24-megapixel sensor also performed well in low-light scenarios. The grains and noises are now more visible due to the s cranked-up ISO level, but it’still fairly usable.

And in case it gets really dark, the front-facing flash also acts a Fill Lighting so it doesn’t look really harsh with overblown exposure after the shot was taken.

Moreover, the Face Beauty 7.0 also works really well. Although you have to set the right Buffing, Skin Tone, and Whitening levels to achieve the right effect to match your skin.

The Bokeh/Portrait mode also works great. The foreground isolation from the background was pretty spot on. There’s not a lot of that cut-out look that you’d normally get in other devices, so I can say that’s I pretty impressed.

Moving on, at the back we have the 13-megapixel primary camera which can also take good photos. In good lighting, the images taken looks desirable and then gets a little worse as the sun goes down. Don’t worry though, as almost every smartphone camera in the world is guilty of having this flaw.

With that said, the colors looked a little plain but it leaves you more flexibility to alter things around on the editing. The contrast could have been a better and the dynamic range is not the best that we have seen, but we’re just nitpicking now.

Overall, both the front and rear cameras’ performance managed to meet my expectations. And for everyone else, I’m pretty confident that you’d enjoy shooting with this thing.

For the price tag, you can expect that Vivo has got everything covered in the connectivity department. Vivo should have incorporated NFC, USB Type-C, and an IR Blaster to the V7, but we’ll give them a pass since not a lot of users have yet to adopt these technologies anyway.

What we’re getting here is the basic 4G LTE, WiFi 802.11 b/g/n, Bluetooth 4.2, GPS, and a microUSB 2.0 port. None of them are on the latest version, but they are still acceptable by today’s standards.

I was able to browse the internet via 4G LTE or on our home network without any problems. The device also seamlessly connected with our Sembrandt SB750 soundbar in the office and played music without any significant noticeable drop in the signal.

Probably the only benefit of only having an HD screen is that it consumes less battery. And during my time with the Vivo V7, the handset indeed played nice with its 3000mAh battery.

The device was able to last me throughout a day of casual use. I was still left with around 15% to 20% of charge left before going to bed. That’s a day of browsing the web via 4G LTE from time to time, streaming music through a Bluetooth speaker, and some casual picture-taking. 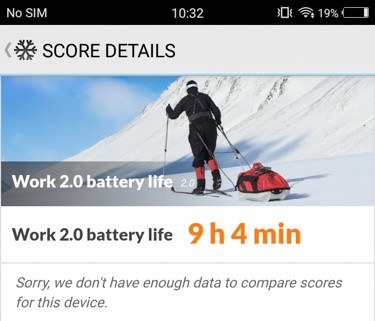 I also ran PCMark’s battery longevity test, and the Vivo V7 did last for around 9 hours before reaching 20%. That’s 9 hours of non-stop synthetic tasks and screen-on time which is clearly far beyond what other smartphones can get.

Vivo came up with a fine device with the V7. All is good, but not until you consider the price.

In conclusion, we realize that the Vivo V7 has what it takes to be a good smartphone. The design is decent, the use of plastic made it really light and portable. The screen, despite the lower resolution, offers good colors and a lot of space to work on.

The cameras are also tip-top. And of course, let’s not forget the battery that lasts for more than a day which is a rare find in smartphones today. 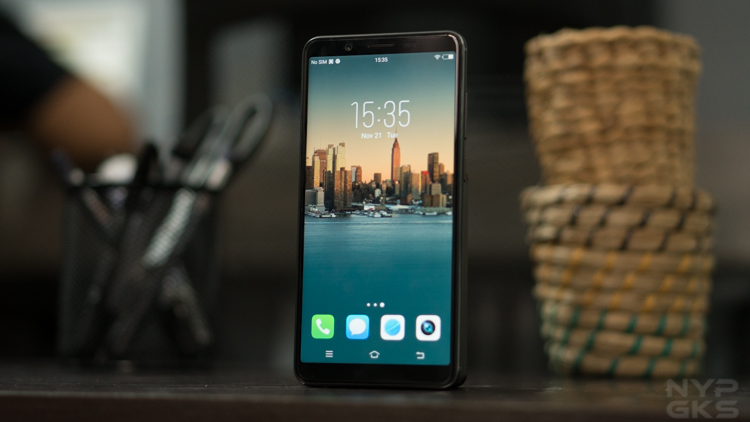 Pricing and Availability of Vivo V7

But then again, I’m not sure if those are already enough to justify its price tag. For a comparison, the Huawei Nova 2i, which retails for the same exact price, offers a more compelling value for the price when we take the hardware into consideration.

But if taking selfies and a long battery life are a top priority, then the Vivo V7 is a safe bet. You might just want to wait till the price goes down, which I’m guessing won’t happen anytime soon. But who knows, maybe the company might decide to cut it down in early 2018?

You can get the Vivo V7 for Php14,990 and it’s now available in different Vivo concept stores and kiosks nationwide.