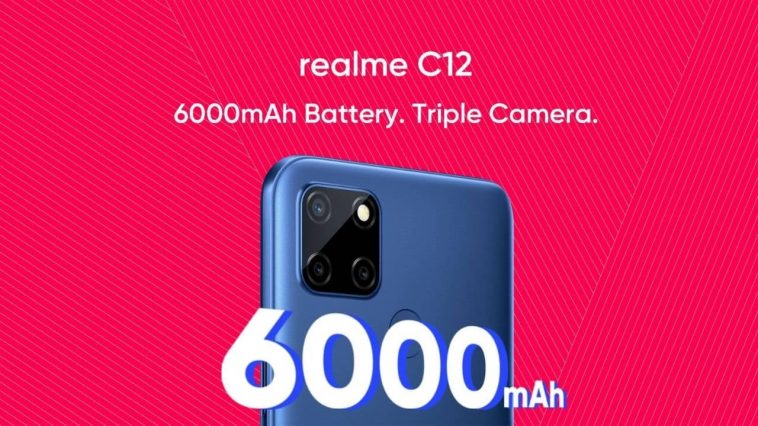 Coming on the heels of last month’s launch of the Realme C15, another budget smartphone was unveiled today. The Realme C12 offers a water drop notch display and a triple camera setup at the back, and main highlights include MediaTek Helio G35 SoC and a massive 6,000mAh battery.

The Realme C12 sports a 6.5-inch HD+ LCD display with 720 x 1,600 pixels resolution, 88.7% of screen-to-body and a Corning Gorilla Glass protection. It is powered by the octa-core MediaTek Helio G35 processor, paired with 3GB of RAM and 32GB of built-in storage, which can be expanded via the dedicated microSD card slot. Software-wise, it runs on Realme UI based on Android 10.

Talking about it’s camera, the Realme C12 comes with a 13-megapixel primary sensor with f/2.2 aperture, 2-megapixel macro lens with f/2.4, and a 2-megapixel monochrome f/2.4 shooter. In front, there’s a 5-megapixel selfie camera setup with f/2.0 aperture. Some of the features available on the camera are HDR, slow-motion, nightscape, panoramic view, portrait mode and many more.

The Realme C12 is available in two color options: Coral Red and Marine Blue. It is expected to go on sale from August 16 with a price tag of IDR 1,899,000 (~Php6,000 before PH taxes). Official pricing and release in the Philippines are still unknown.