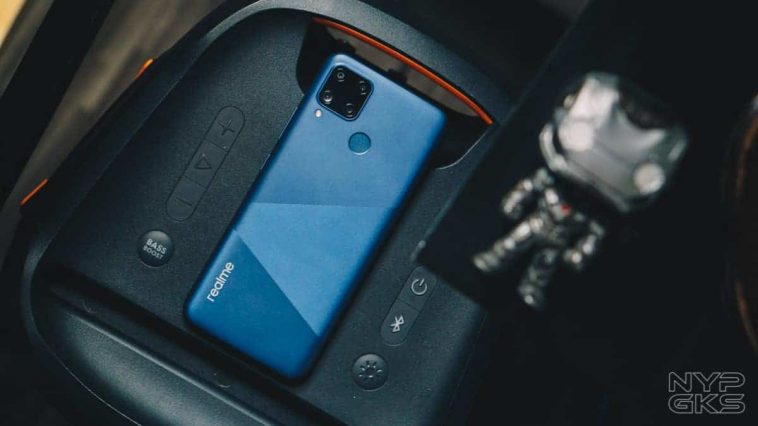 The Realme C15 have made its way in the Philippines and it’s for those who want a proper daily driver smartphone that doesn’t break the bank.

Realme is bragging the C15’s large battery, fast charging, as well as its unique quad cameras and gaming processor. But the question is, should you pay attention to this device? Does it have what it takes to justify the money you’d spend on it? We find out in our Realme C15 full review.

We’ve always praised Realme for coming up with new designs every time they release a smartphone. And we’re doing the same with the Realme C15. Despite its all-plastic build, it has an aesthetic that we’ve never seen on any other Realme smartphone before.

The Realme C15 is available in two colors: Seagull Silver and the one we have here, Marine Blue. It has a textured surface with a gradient geometric design. Unlike the glass-like plastic that others use, this looks much cleaner and resistant to fingerprint marks.

However, Realme did copy the square camera glass of the Realme C11. But this time, it has four lenses symmetrically distanced with each other, and the LED flash outside the pack. The fingerprint scanner is also on the back, which is a little high for those with smaller hands to reach.

With its enormous screen and battery, the C15 is predictably large. It weighs 209g and 9.8mm thick, while most phones averages at 175g and 8mm, respectively. Thankfully, the curved edges kept it comfortable to hold.

On the front, we have the aforementioned 6.5-inch screen, with thin bezels on the sides, slightly thicker in the bottom, and a waterdrop notch on the top. This results to an 88.7% screen-to-body ratio.

We then have the SIM tray on the left side. It can accommodate two nano SIMs, with a special slot for the microSD card.

The top is clean, so don’t expect a noise-canceling microphone for calls. Instead, we have the single mic on the bottom, alongside the headphone jack and single loudspeaker. Disappointingly, it has a microUSB port instead of the modern USB Type-C.

The bottom line is, we’re satisfied with the Realme C15’s design and build. The front is protected by Corning Gorilla Glass, although the specific model was not mentioned. Plus, it ships with a pre-installed screen protector. Realme also sealed the C15 carefully to make it splash resistant. That’s enough for water-related accidents, but don’t go swimming with it.

The Realme C15 sports an enormous HD+ LCD screen, with a 1600 x 720 pixel resolution, and has a 420-nits peak brightness for outdoor visibility.

Display quality is good for the price. The large size provides a lot of room for doing tasks, playing games, and watching movies. The colors from the IPS panel is decent, although an HD resolution at this size is definitely not the most ideal.

The difference is not noticeable, but looking closely, you can tell that sharpness and detail are not its strongest suit. Still, it gets the job done.

On the bottom, we have a surprisingly good loudspeaker. It has a really loud volume, perfect for listening to music or streaming videos with friends. Sound balance is great, too, with audible bass.

You can plug in a pair of earphones for a deeper listening experience. But, it doesn’t come with one so you might want to purchase separately, which Realme also has a lot of.

The Realme C15 is powered by a 2.3GHz MediaTek Helio G35 octa-core processor, with IMG PowerVR GE8320. You can get it with 3GB/64GB or 4GB/64GB RAM and storage configuration. What we’re reviewing here is the base 3GB model.

But then again, it’s an entry-level processor, so don’t be surprised when you experience hiccups and stutters here and there, especially in gaming. Call of Duty Mobile ran decently at Medium settings, with a couple of frame drops. Mobile Legends, with HFR enabled, ran smoothly, but again, with occasional lags.

Just like most of their latest releases, the Realme C15 runs on the latest Android 10 with Realme UI on top.

The overall interface looks pretty basic, which is good. Although, we would still prefer the plain and simple feel of stock-Android or Samsung One UI.

Both the lockscreen and home screen are straightforward. Swiping up from the desktop gives quick access to the app drawer. Swiping down launches a search tab for local and internet search.

Those who are heavy on customization can configure the home screen mode, set themes, icon styles, and more.

Do Not Disturb is easily configurable and can be enabled from the drop-down menu. You can also opt to use gesture buttons if you don’t prefer on-screen ones. Gestures and Motion commands are also present.

Digital Wellbeing and Parental Controls are here to monitor your smartphone usage. Screen recording is also present, where you can adjust the video resolution or opt to record audio using the microphone.

Game Space is a feature that’s been present since ColorOS. It consolidates all your games and optimizes the performance and notifications depending on your preference.

The camera app is intuitive, and the Google keyboard is familliar and easy to get used to. It also has other significant features include App cloner, Split screen, and HeyTap Cloud.

One of the bragging rights the Realme C15 have is its quad cameras. It starts with a 13-megapixel main camera, 8-megapixel ultra-wide, 2-megapixel monochrome lens, and 2-megapixel retro lens. We then have an 8-megapixel selfie camera on the front.

Let’s start with the 13-megapixel primary camera with 5P lens, PDAF, and a quite disappointing f/2.2 aperture. In good lighting, it offers a bright, colorful, contrasty image. Although the dynamic range is poor. You can enable the Chroma Boost feature, which enhances the colors and contrast for a more Instagram-ready image. No editing needed.

But just like most camera phones, it does struggled in low-light scenarios. Especially with f/2.2 aperture.

Next, we have the 8-megapixel ultra-wide camera with f/2.2 aperture and 119-degree field-of-view. Ultra-wides used to be a premium feature but are now present even on entry-level phones.

The overall quality is passable, but definitely not the best. What’s important is the benefits this kind of lens provides for shooting buildings, interiors, group photos, and bigger subjects.

The two other lenses are quite peculiar. Realme C15 webpage says that it has a 2-megapixel f/2.4 B&W lens and 2-megapixel f/2.4 retro lens. We don’t see these options in the camera app. Albeit, we suspect that the B&W lens analyzes colors to help the 13-megapixel camera to take images with better colors.

It would have been ideal to have a depth sensor instead. As you can see in the portrait mode sample below, the edge detection is quite bad and inaccurate.

You can play with the AI face beauty if you want to, but maxing it out will result in an unrealistic and soft image.

The Realme C15 comes with a fingerprint scanner on the back, which works unsurprisingly fast and accurate. The device also uses the 8-megapixel selfie camera for the face unlock, which works at good lighting, but fails to detect your face at pitch black rooms.

It’s not a real phone without the proper connectivity features. With that, the call quality on the Realme C15 is decent, although the lack of noise-canceling microphone can be a hassle when making calls in crowded areas.

The 4G LTE worked fine during our time with it, which is useful if you don’t have WiFi at home. Also, we didn’t find any issues with its WiFi 802.11 b/g/n and Bluetooth 5.0 during our testing. Although, it’s quite disappointing that it still uses microUSB instead of Type-C.

Realme have been bragging the battery and charging on the Realme C15, and they have the right to do so. It’s so large it gets to have reverse wireless charging that turns it as a power bank using an OTG cable.

As you can see, it got a whopping screen-on time of 17 hours and 29 minutes on PCMark. That’s after a loop of synthetic workload until the battery goes from 100% to 20%. We ran the test with the WiFi and Bluetooth off and the screen brightness and volume at 50%.

In real-world scenarios, this device can easily last you for an entire day of heavy use (gaming, streaming, etc.). You can stretch that to two days of more if you’re a light to moderate user.

We rarely see 18W fast chargers on entry-level phones. One of the reasons why the Realme C15 is special. A full charge will take about two hours or less.

As you probably know by now, the Realme C15 do offer an interesting value for the money. It has a pretty solid build and unique design, a capable processor for everyday task, good cameras, and of course, a long battery life with a complimenting fast charger. All that while maintaining an affordable price tag.

If we were to nitpick, we just wish that it has a USB Type-C port instead of microUSB. It would also be nice to see a free clear case on the box.

But overall, if you’re looking for a smartphone for school, entertainment, or just an overall good daily driver that doesn’t break the bank, the Realme C15 is worth your time and money.

Realme C15 pricing and availability in the Philippines

The Realme C15 has a starting price of Php6,490 for the 3GB/64GB model. Which will be available exclusively online/Lazada starting August 20. A special PH Squad Edition Box with doodle art with a note from the Realme Philippines team will also be sold online.

Meanwhile, the Realme C15 4GB/64GB variant will be available in online and offline stores for Php6,990.