The Samsung Galaxy A71 just came out, an enormous Galaxy device for work and play.

But this time, we’re focusing on the ‘play’ aspect in our Samsung Galaxy A71 gaming review. With its gigantic size and premium price tag, were curious to see how much power we can get out of it.

Oh, and if you don’t like reading, you can watch our gaming review video below. By doing so, you can really see how smooth the games actually are on the Galaxy A71.

Before we proceed, let’s take a look at the hardware that we’ll be working on here. As we said earlier, the Galaxy A71 is an huge device, and literally so.

It sports a massive 6.7-inch Full HD+ Super AMOLED screen. Don’t worry as it has ultra-thin bezels that made the overall footprint as small as possible. We also have the Infinity-O punch-hole in the middle, just like what we see in Samsung flagships like the latest Galaxy S20 series.

Of course, let’s not forget to talk about the most important feature ― the processor.

The Samsung Galaxy A71 is powered by a Qualcomm Snapdragon 730 octa-core processor, an Adreno 618 GPU, with flagship-level 8GB of RAM, and a roomy 128GB of onboard storage for all your games and media files. Samsung also equipped it with a generous 4,500mAh battery and a complimentary 25W of fast charging.

And if you’re interested, the Galaxy A71 also has a quad-camera setup. There’s a 64-megapixel primary shooter, 12-megapixel ultra-wide, 5-megapixel macro, and a 5-megapixel depth sensor. A 32-megapixel selfie camera is on the front. It also comes with USB Type-C connectivity, Bluetooth 5.0, and dual-band WiFi for uninterrupted gaming. 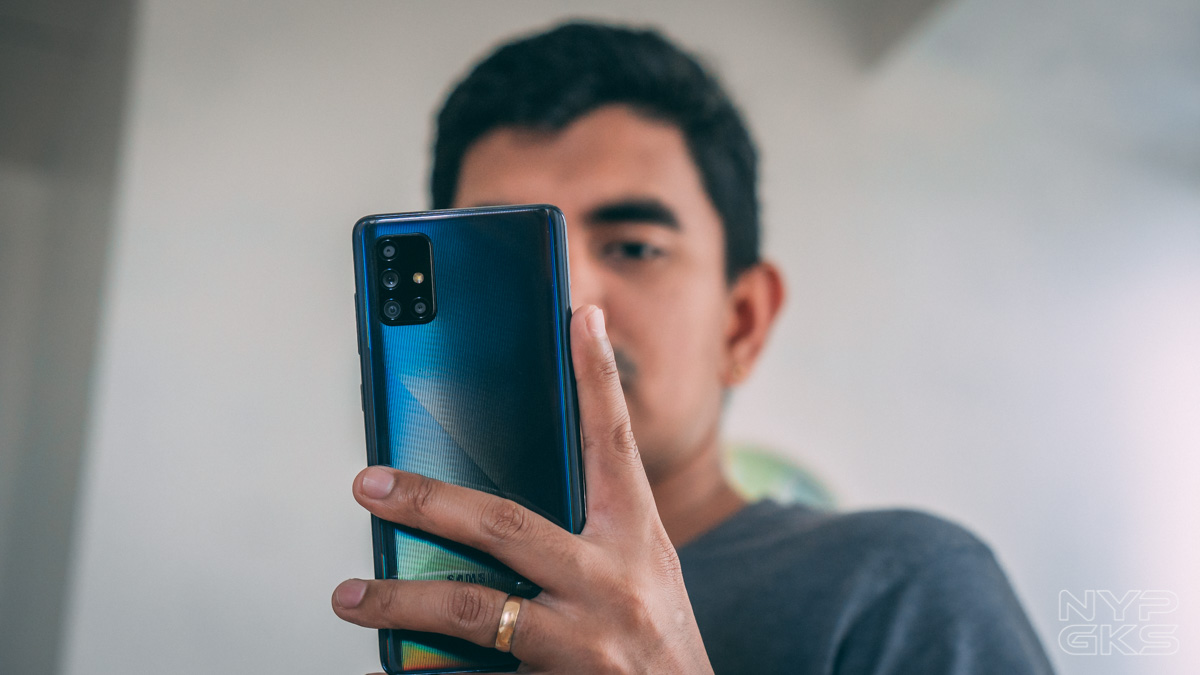 Now that we finally have all those things out of the way, let’s start.

Bear in mind that we ran this test under ‘Optimized’ power mode — the most fitting setting that we found since the Samsung Galaxy A71 doesn’t have a dedicated Power Mode.

We also used GameBench to get the average frame rate and frame stability as we test these games for at least ten minutes each.

Related: Samsung Galaxy A51 vs Galaxy A71: Specs Comparison

Mobile Legends on Samsung Galaxy A71

First on the list is Mobile Legends — the most popular and competitive game in the industry today.

Despite being the most played title, Mobile Legends: Bang Bang is actually not the most resource-hungry game in this test. That’s why we were able to run it with all the graphics settings to High and the quality at Ultra.

Under those maxed-out settings, GameBench recorded a steady average frame rate of 60fps with 96% stability. That’s the highest frame rate that the display supports. 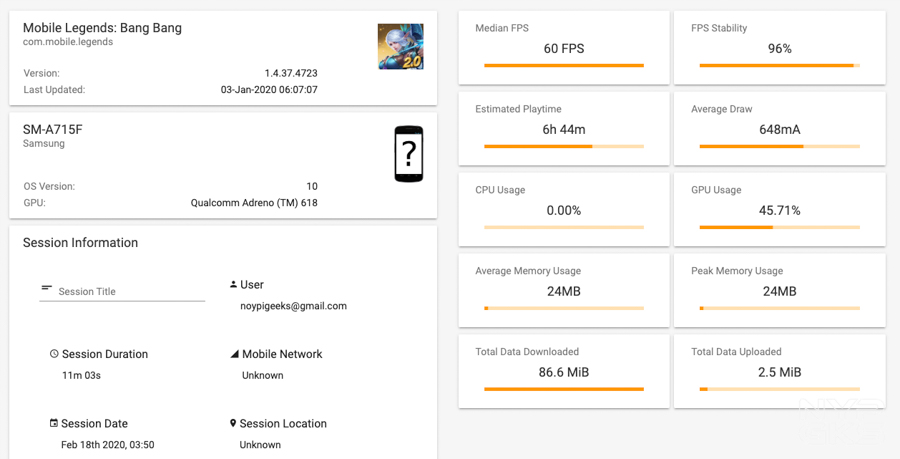 This translates to very smooth gameplay at stunning graphics. This means it is now purely up to your skills to win the game. No more excuses.

Call of Duty Mobile on Samsung Galaxy A71

Let’s step it up a bit further. Here we have Call of Duty Mobile ― another popular game, but with more demanding graphics requirements.

But despite its advanced graphics, this game is actually very optimized. Which is why we were able to run it at high graphics quality and frame rates. We also have the real-time shadows enabled, and graphics style set to Realistic.

Call of Duty was so optimized that we were able to run it at an average frame rate of 58fps with 83% stability. It results in ultra-smooth gameplay with stunning graphics. No frame drops were visible, even in big explosions and intense combat.

This next one is for the basketball fans out there. We have the NBA 2K20 for Android, a mobile alternative to the popular console and PC game. 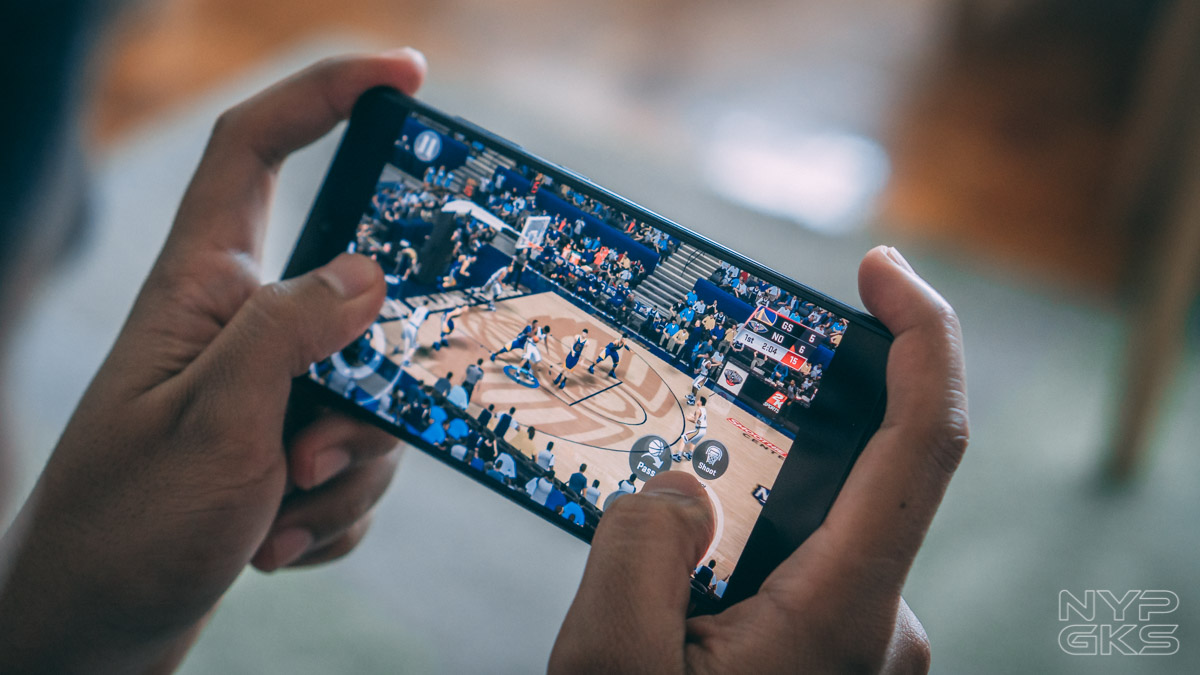 With its highly-optimized construction, and the powerful hardware on the Samsung Galaxy A71, the game was playable at high graphics settings. Almost all of the tabs are set to high, although the depth of field effect and Cloth Simulation are off and the crowd quality is set to medium.

Under these settings, the game was playable at an average frame rate of 51fps with 98% stability. 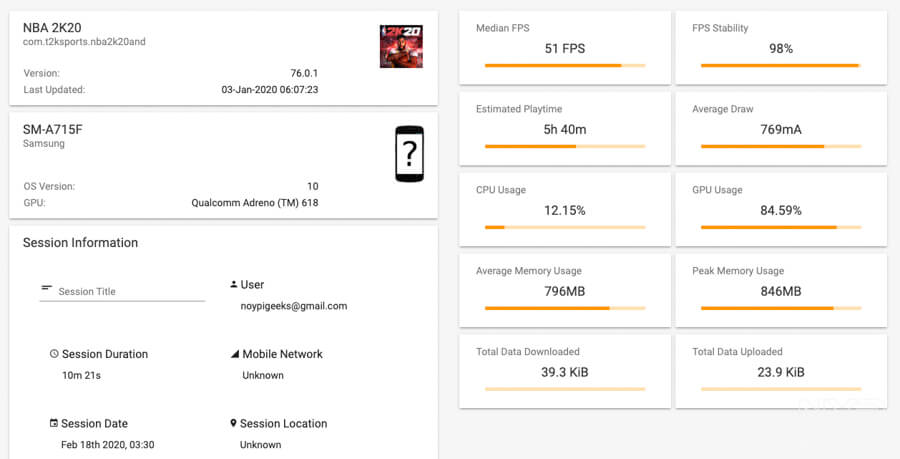 It should feel as smooth as Mobile Legends, although it dips when the game is heated up or as it transitions to cut scenes.

Asphalt 9 on Samsung Galaxy A71

This last one is a little tough. Not a lot of people might play Asphalt, but its fast-paced and action-packed nature could be really too taxing for the processor. Hence, we’re including it to see how far the Samsung Galaxy A71 can go.

Unlike the other games, you cant fine-tune the graphics settings on the Asphalt 9. You’re only given a chance to pick between Performance, High Quality, and the one that was pre-enabled, Default. The game ran at an average frame rate of 30fps with 90% stability. Obviously, the game doesn’t support the full 60fps standard. But still, this means that the game ran at its best on the Galaxy A71. 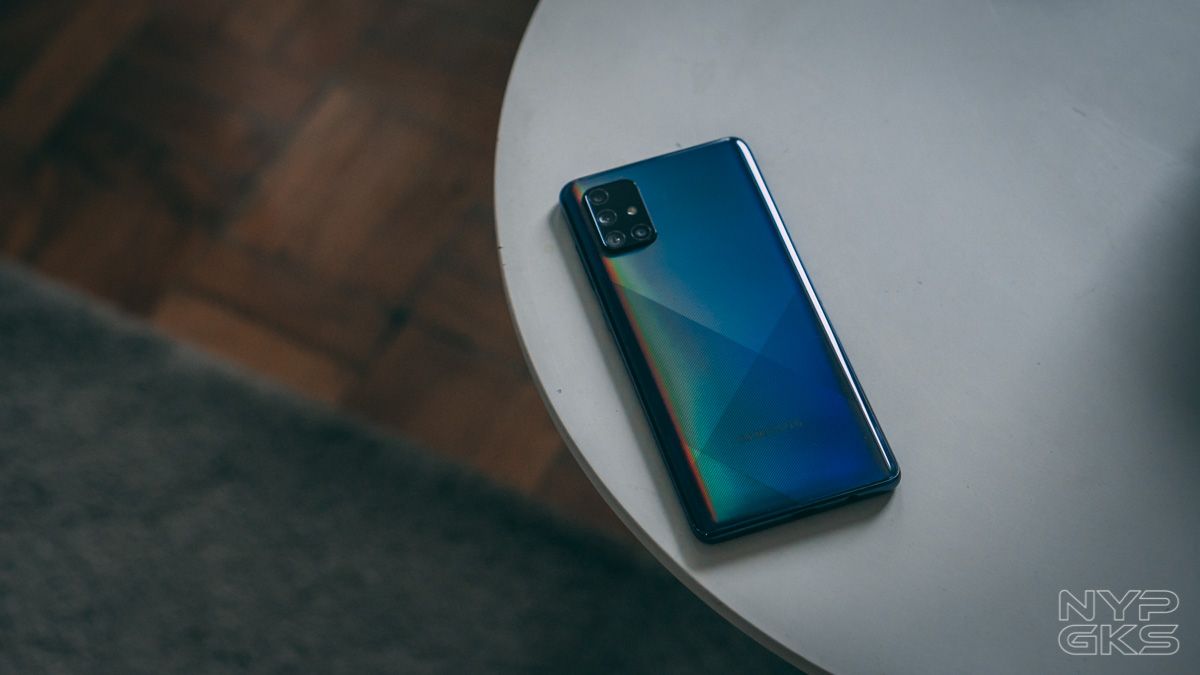 So, can you game on the Samsung Galaxy A71? The answer is a big YES. Its powerful Qualcomm Snapdragon 730 processor and Adreno 618 GPU, partnered with 8GB of RAM, can handle all types of games available in the Play Store without a hitch.

The best part is, you can enjoy all these games on a large and vibrant 6.7-inch display. There’s also the enormous 4,500mAh battery that guarantees long gaming sessions.

If you’re interested in buying one, the Samsung Galaxy A71 is available in the Philippines for a price of Php22,990.