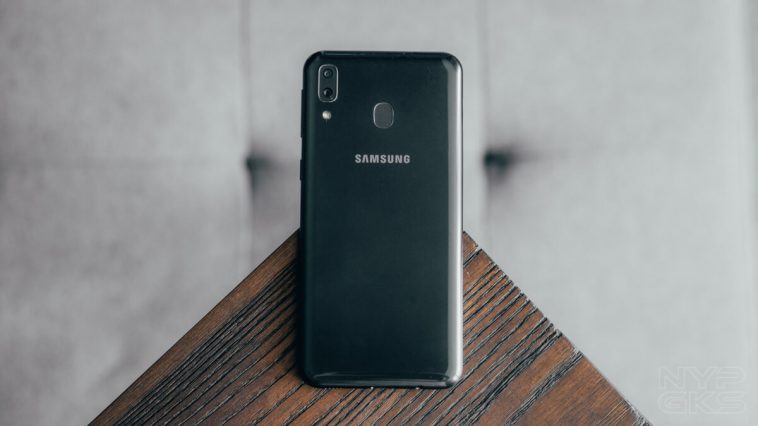 There’s no denying that Samsung’s market share is slowly being eaten by a lot of emerging smartphone brands in the market today.

But finally, it has come to Samsung’s senses to do something about it and actually come up with bang-for-the-buck devices to go against a lot of companies who are out to get them.

One of those devices is the new Samsung Galaxy M20. This handset, alongside all its brothers from the Galaxy M series, were created to provide real value for the money.

But, was it able to serve its purpose? Here in our Samsung Galaxy M20 review, we shall see if this device is actually worth every penny, and can eventually help Samsung from drowning.

The overall look and structure of the Samsung Galaxy M20 really speak for its price. It’s primarily made of plastic, with no sign of metal anywhere of its outer shell. But despite the use of second-rate material, the device doesn’t feel like it’s going to break easily. It feels solid, and the back panel looks clean. The Charcoal Black model that we have here looks really sleek. But if you want something a bit more flashy, you can go with the Ocean Blue flavor.

However, the back panel is really prone to fingerprint marks and smudges. Also, it’s relatively chunky as it’s 8.8mm thick and weighs at around 189g (light smartphones are at around 165g) — all of these are due to its large 5,000mAh battery. For a quick tour, we have the 6.3-inch FHD+ IPS screen on the front, with the Infinity-V notch on top, and ultra-thin bezels on all sides.

On the left side, there’s the SIM tray that can accommodate two nano SIM cards and a microSD card for storage expansion. While on the left there’s the lock/power switch and volume controls. Much like its overall build quality, the buttons feel a little cheap, but are surprisingly tactile and satisfying to press.

The top only has the noise-canceling microphone, while on the bottom we have the 3.5mm headphone jack, loudspeakers, the primary microphone, and, thankfully, a USB Type-C port. As stated earlier, the back panel is really clean. It only houses the Samsung logo in the middle. With the fingerprint scanner right on top of it — easily reachable by your index finger.

On the top left, we have the dual-camera setup. It’s sitting flush on the back with without any camera bump. The Samsung Galaxy M20 might not have the best design and build quality out there. Clearly, the company wanted to prioritize what’s really important on a smartphone — its internals and features.

Speaking of features, one of the great characteristics of the Samsung Galaxy M20 is its display. It features a tall 6.3-inch FHD+ IPS screen, with a 2340 x 1080 pixel resolution and ~409 pixel-per-inch. The screen quality is pretty much identical with most IPS panels around. It provides acceptable brightness and enough saturation. Its viewing angles are fine, too. However, unlike OLED panels, the contrast is not the best. It also doesn’t have any Corning Gorilla Glass protection, but I guess that’s too much to ask for the price.

Still, its sharp resolution and large size make it a great display for productivity, playing games, and consuming content.

Another key feature of the Samsung Galaxy M20 is its processor. It uses an in-house 1.8GHz Exynos 7904 octa-core processor. This is the same chip found on the Galaxy Tab A 8.0 2019.

The Galaxy M20 is available in 4GB/64GB model, but the variant that we’ll be getting here in the Philippines — and the one that we’re reviewing right now — is the 3GB/32GB base model.

Now that we got the numbers out of the way, let’s talk about its actual performance. With that, let me start by saying that the Galaxy M20 did provide a reliable speed, but is definitely not the snappiest.

Basic and commonly used apps like Facebook, Instagram, Google Chrome, and taking pictures ran fine. Although you can definitely feel some hitch when you reach far below your feed, or a lot of opened apps starts to pile up.

The underwhelming 3GB of RAM might have something to do with it. But there’s no denying that the Exynos 7904 might also be the culprit. Its performance is slightly inferior to competing chips like the Helio P60 from MediaTek.

Its gaming performance is not the best either. The Samsung Galaxy M20 was able to handle demanding titles like PUBG Mobile quite disappointingly. The game only ran with noticeable frame drops despite the graphics set to medium.

On the upside, highly-optimized titles like Mobile Legends and NBA 2K19 ran smoothly. However, you might have to settle with its medium-set graphics quality.

Overall, the performance of the Samsung Galaxy M20 feels really lacking. Especially when compared with a lot of competition in the market today.

The Samsung Galaxy M20 runs on Android 8.1 Oreo with Samsung Experience v9.5 interface on top. Quite disappointingly, it doesn’t come with the latest Android Pie with Samsung One UI. But knowing Samsung, we shall expect that update to arrive soon. But nonetheless, Android Oreo is still a decent OS. Plus, the Samsung Experience interface that this device has is very much identical to the clean and straightforward look that the One UI has.

The lock screen looks fairly clean, with the home screen looking the same. Swiping up from the desktop gives you access to the App drawer, with a search tab that helps you look for a particular app, items in the settings menu, and local files. Moreover, the notifications tab and quick toggles also look pretty straightforward on the Samsung Galaxy M20. You can swap all the way down to reveal more items on the control center.

Samsung also spared us from their Bixby smart assistant on this device. Which, we can all admit, no one actually uses. The built-in keyboard, which a lot of people spend most of their time using, is easy to type to. Its camera app is pretty neat, too. Although can feel a little overwhelming at first due to the slew of settings and buttons that it has.

Diving inside its organized settings menu, you can see that there are a lot of navigation bar options — from traditional on-screen buttons to gesture ones. There’s also the Device Maintenance section which automatically analyzes any opened apps to optimize the battery and RAM management for better performance.

Like a lot of smartphones today, the Samsung Galaxy M20 has both face unlock and fingerprint scanner biometric security features built right in.

The fingerprint scanner is situated in the back, positioned high enough to be easily reachable by your index finger. It can detect your print and unlock the device accurately. Although it takes a second and at least one to two tries before it gets it right. Which is definitely not the best that we’ve seen. That’s the same sentiments we have on the face unlock. Unlike some of we tested before, the front-facing camera will take a second or two before it can unlock the device. Not the snappiest that we’ve tested. We sure hope that they both get faster once the Android Pie update with Samsung One UI arrives.

It also lacks features like a dedicated File Safe and App Lock, something that devices like the Huawei Y9 2019 and its EMUI 8.2 interface have.

At this point of this review, you probably already noticed that the Samsung Galaxy M20 tried to cover all the bases despite its price tag — and its camera system is not exempted. Ultra wide-angle cameras are starting to become a hit in a lot of smartphones today. They are included in devices like the flagship Huawei Mate 20 Pro and the midrange Vivo V15 Pro. And with the Galaxy M20, Samsung is trying to bring that feature in an entry-level device.

This device has a 13-megapixel primary camera, with a 5-megapixel ultra-wide-angle camera sitting right beside it. An 8-megapixel selfie-snapper can then be found on the front.

To start, let’s talk about its primary shooter first. The 13-megapixel sensor can take acceptable images under good lighting. It sure is fine for the price, but if you really want a more detailed report: the colors do look a little washed out, the contrast is a little failing at times, and the details isn’t that sharp.

Next stop, we have the aforementioned wide-angle lens. As what you could already tell, having a 5-megapixel sensor isn’t really that exciting. The colors and contrast are workable, but the details and sharpness are really poor.

However, having the option to take pictures of larger objects or a group of people sure is convenient.

Since it has a dual-camera setup, the Samsung Galaxy M20 has a Live Focus feature. But the weird part is, it can only work with human subjects. Which beats one of the purpose why it has two cameras on the back.

Thankfully, it did work well. The device has good edge detection, so the subject is isolated well from the background, eliminating that cutout-like effect.

Moreover, the 8-megapixel front-facing camera on the Galaxy M20 also provided a mediocre performance. The overall tone and detail quality of the selfies we took were fine, but we’ve definitely other competing devices performed better.

To cheer you up, the Live Focus does work well on this camera. You can also play with its built-in AR stickers if you’ve got nothing to do.

If there’s one solid feature that the Samsung Galaxy A50 has, that is its large 5,000mAh battery with 15W fast-charging. We were able to squeeze out 12hrs and 18mins of screen-on time from this thing using PCMark’s battery test. The app ran different simulated tasks (web browsing, video editing, etc) continuously until the battery reached 20%.

This basically means that, in real-world usage, you can get at least 8-9hrs of online video streaming and at least 6hrs of gaming.

Just like what we found out in our Galaxy A50 review, Samsung’s latest releases are clearly a major step up over their previous ones. They are starting to come with better specs and features to improve their value factor. However, just like the Galaxy A50, the Samsung Galaxy M20 still wasn’t able to completely beat the competition. Sure, it’s a major improvement over Samsung’s previous releases, but I wish the company did a better job in one key area of the device — the performance.

But if you can get past its unsteady gaming capabilities, the Galaxy M20 can be a good content consumption and camera phone. It has a large display and a big battery for binge-watching, and a decent pair of cameras for some casual snaps.

The Samsung Galaxy M20 is a great device by itself. However, there are surely a lot of better alternatives out there. Which proves that the company wasn’t still able to run away from those who are out to get them — at least for now.

Samsung Galaxy M20 pricing and availability in the Philippines

The Samsung Galaxy M20 originally went on sale in the Philippines for Php10,990. But now, it’s only available for a cheaper price of Php10,990.

But the thing is, unlike Samsung’s other releases, the Galaxy M20 is an online-exclusive release. You can only get it at Shopee, Lazada, Argomall, Abenson, and MemoXpress.