Smartphones have really come a long way in terms of performance and design. If you asked us five years ago what devices would look like now, we might have provided a wrong answer.

All the advancements in mobile technology were driven by intense competition in this saturated industry. While all these brands are under a lot of pressure, consumers and tech enthusiasts are enjoying all the benefits of it.

Today we have the Vivo V15 Pro, one of the fruits of all the action going around the tech world. This device has almost all of the latest and futuristic features that you can find on a smartphone today. And here in our Vivo V15 Pro review, we ought to see if all its cool tricks are enough to justify its price tag.

The Vivo V15 Pro appears to be the direct descendant of the NEX S — at least in terms of design. One of the device’s key highlights is its 6.39-inch all-screen display, with really thin bezels resulting in an impressive 91.64% screen-to-body ratio. 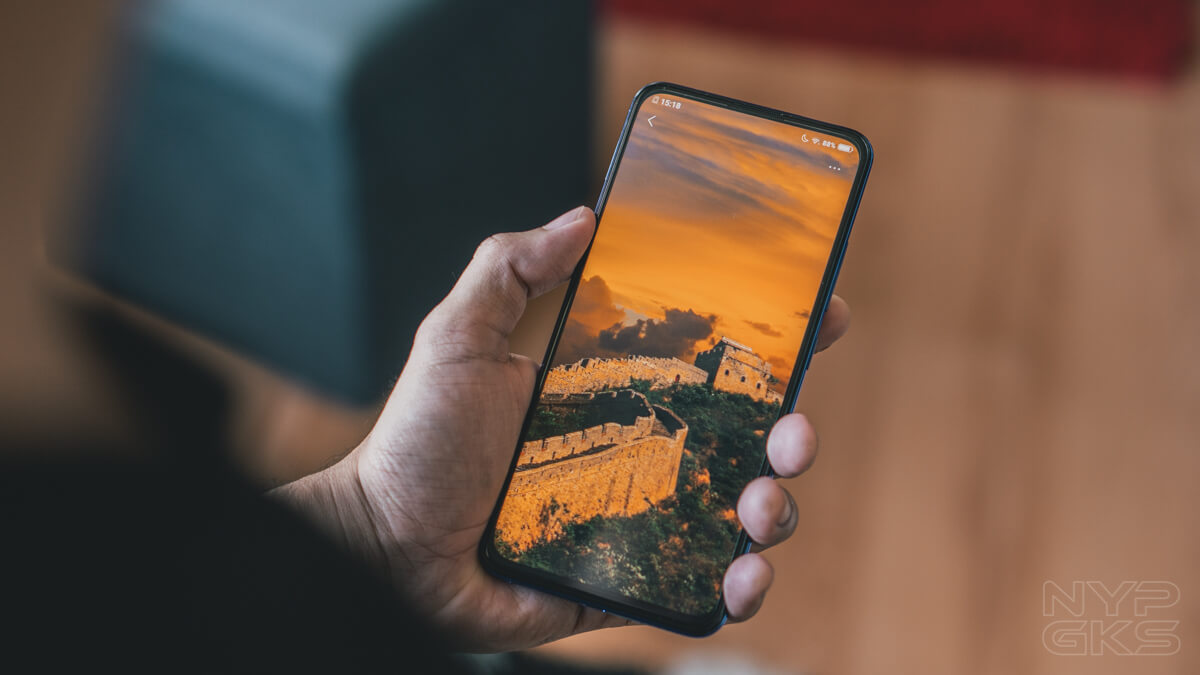 Vivo was able to accomplish this by utilizing a pop-up mechanism for the selfie camera, which levitates on the top of the device. The front-facing sensor is adjacent to the triple cameras on the back, housed in a really modern-looking bulge covering.

Vivo V15 Pro is protected by a Corning Gorilla Glass 6 on the front, although the back is made of plastic. Despite the use of second-rate material, the back panel doesn’t look and feel cheap. The Topaz Blue model that we have here also has a distinct ‘Vivo’ look, with small pearl accents and a subtle gradient tone. 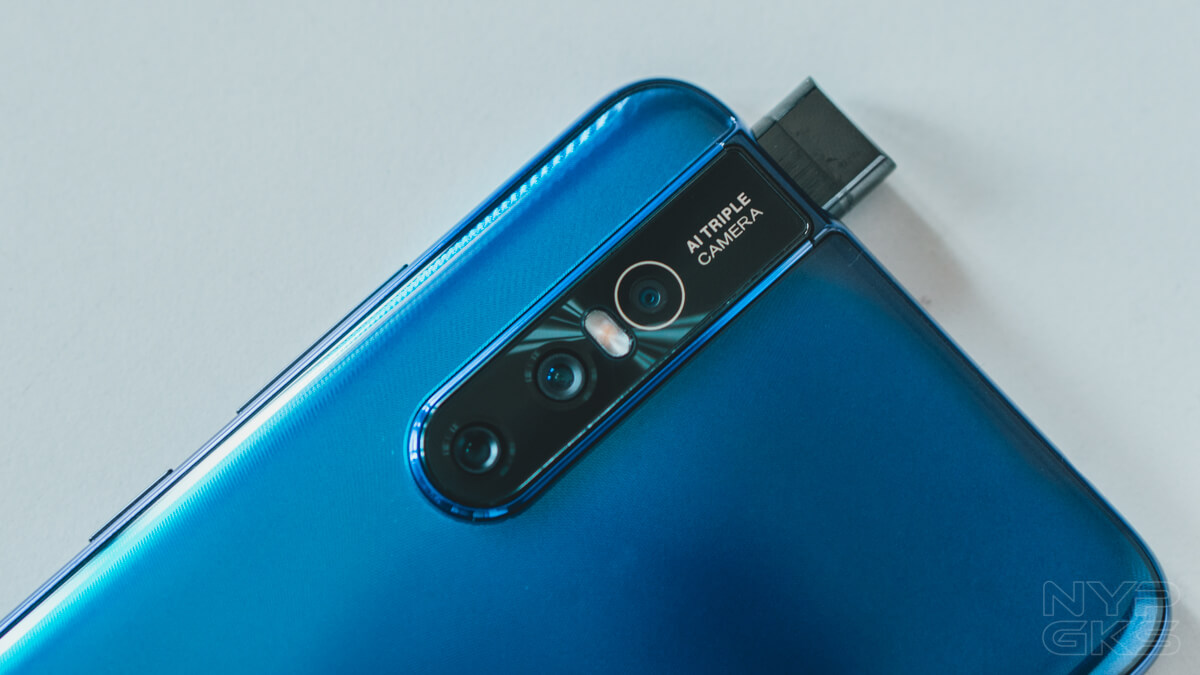 The Vivo V15 Pro also feels relatively thin but is definitely not the thinnest at 8.21mm. At 185g, it does feel lightweight, unless you try comparing it side-by-side with a smaller device.

Taking a tour, we have the said levitating camera on the far right on the top, while on the left we have the 3.5mm headphone jack and a noise-canceling microphone. 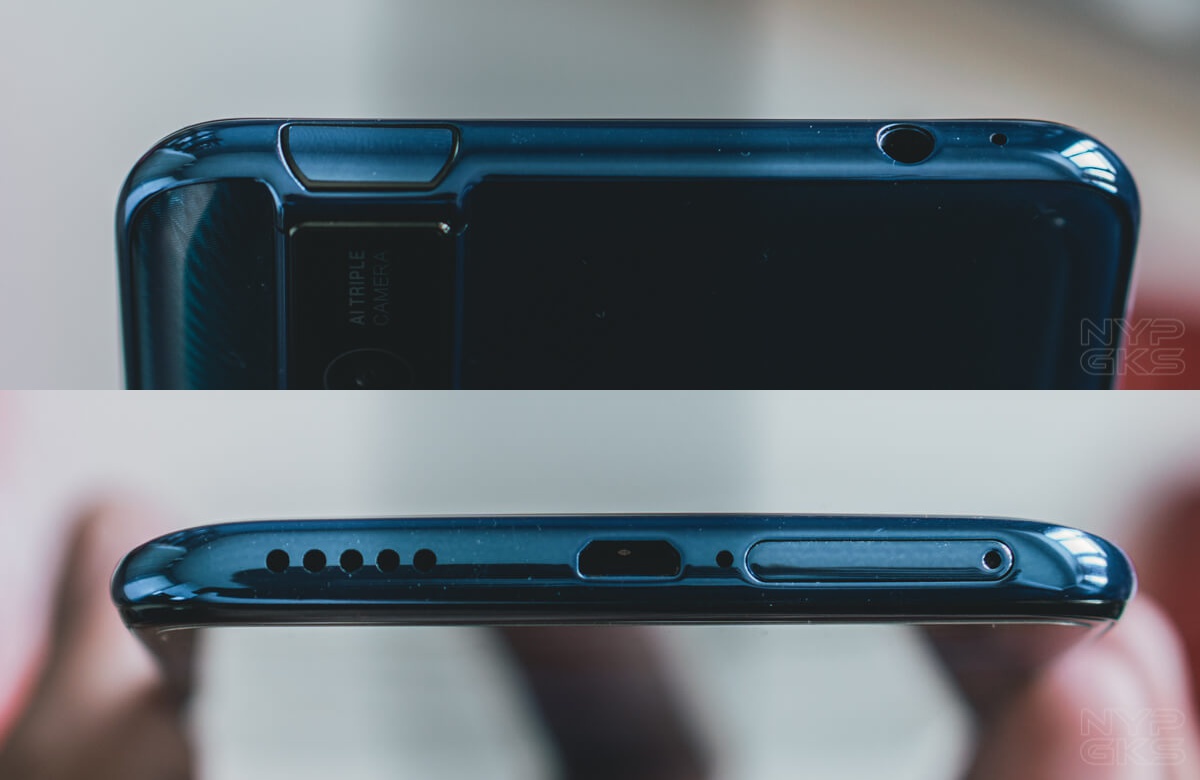 We have the loudspeakers at the bottom, the dual-SIM slot, and a micro USB port instead of Type-C — which is a really disappointing choice, especially for a device at this price point.

If you’re worried about storage expansion, we still have it here. The slot is sitting solely on the left side, while below it is a dedicated button to summon Google Assistant. I must admit, during my first moments with it, I’ve accidentally pressed this button many times mistaking it as the lock button. 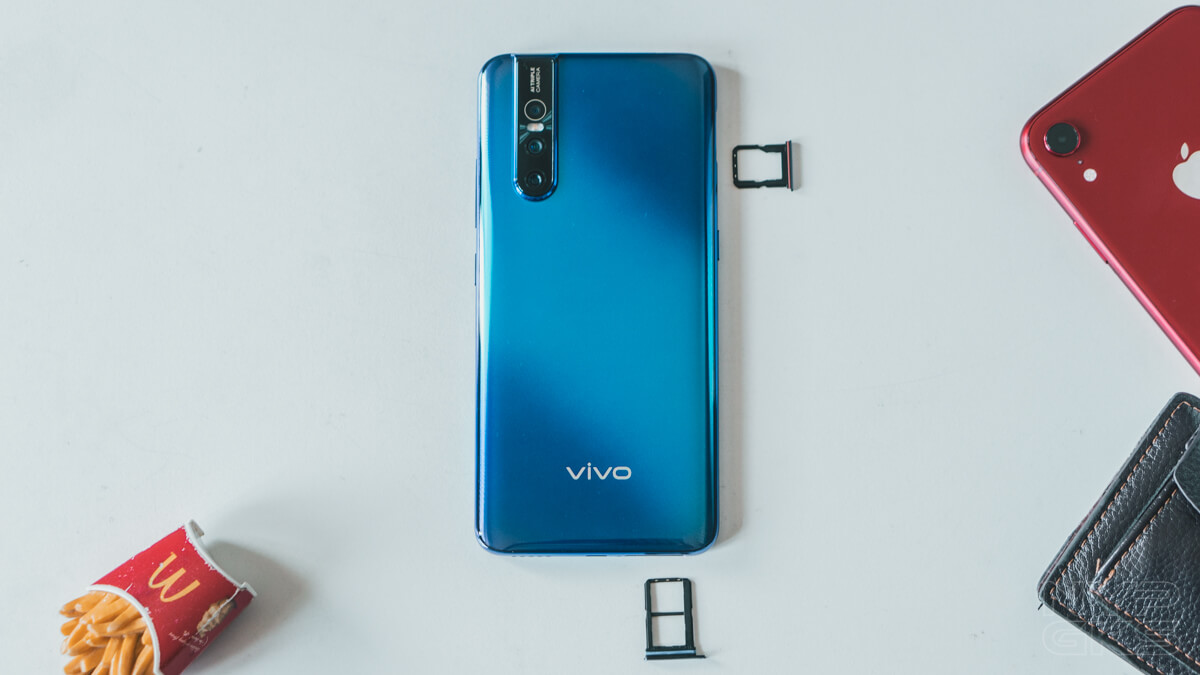 Speaking of which, the lock/power switch is on the right side, just below the volume controls. The buttons are reasonably tactile and they get the job done.

As said earlier, one of the biggest specs and design highlights of the Vivo V15 Pro is its display. It brags a large 6.39-inch FHD+ super AMOLED screen, with a 2340 x 1080 pixel resolution and ~403 pixels-per-inch. 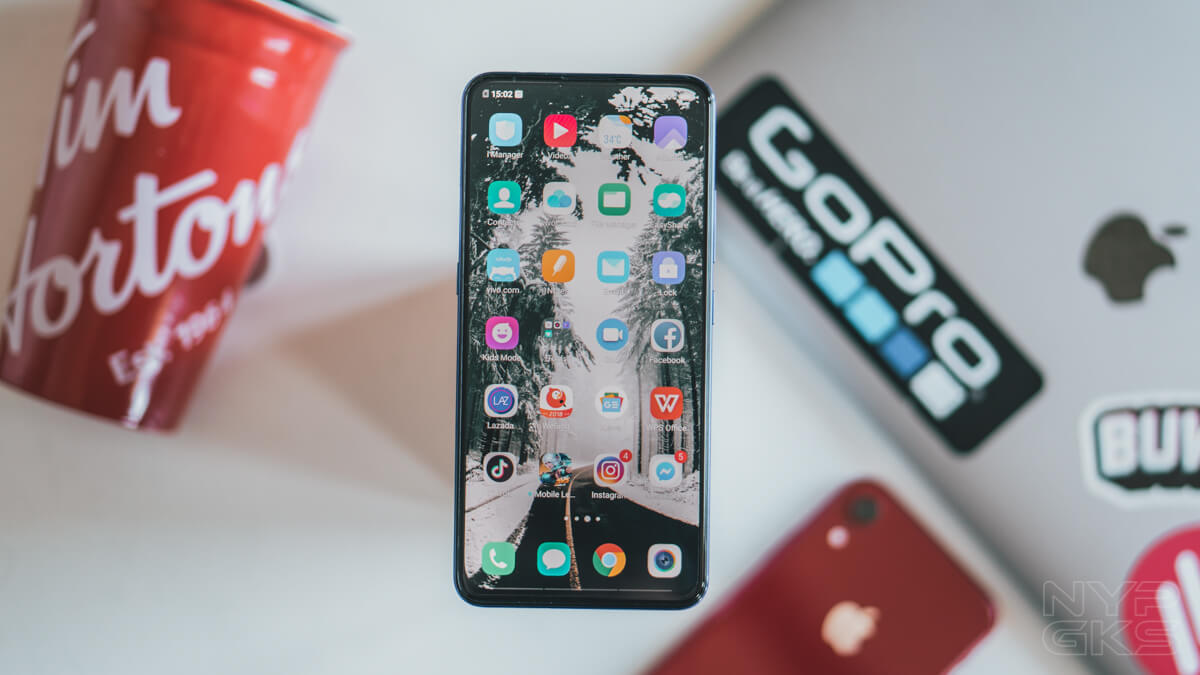 However, due to its 19:9 aspect ratio, playing 18:9 videos (which what most videos are shot on) will have black bars on the sides. You can maximize the entire screen by doing a pinch-to-zoom gesture, although the top and bottom frames would be cropped. 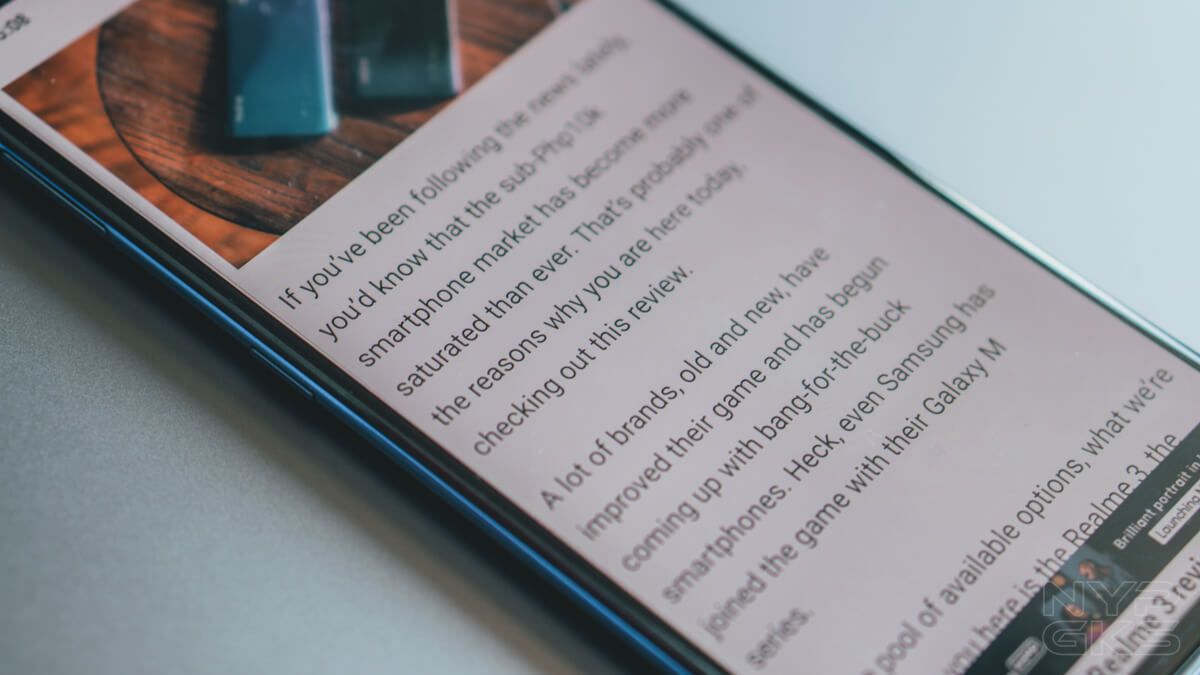 The screen quality itself is great, too. Thanks to Vivo V15 Pro’s Super AMOLED panel, colors have good saturation and the contrasts are really deep. Also, the FHD+ resolution assures that every detail, even tiny texts, are sharp. It does cover 100% of the DCI-P3 color space with a 10,000,000:1 contrast.

Outdoor visibility shouldn’t also be an issue as the AMOLED screen beams enough light to make it decently visible outdoors.

The bottom-firing speaker on the Vivo V15 Pro only provides a decent experience. The volume is audible enough for private listening or in a lightly crowded room, but we can’t say the same for noisy environments. 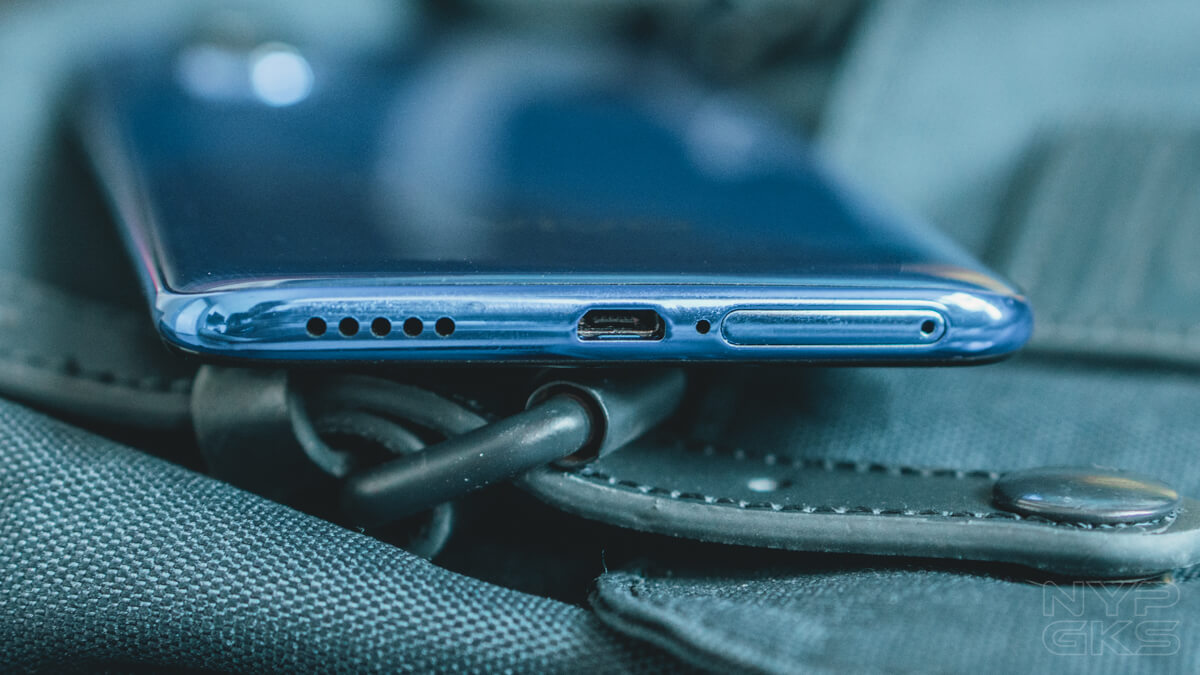 The sound quality is fairly decent, too. It does sound clear with the right balance, although things get distorted at maxed out volume.

We also have the same sentiments with the sound quality coming out of its 3.5mm headphone jack. The sound quality is just okay and we’ve definitely seen (or heard) other devices perform better.

Vivo really went all out in the other features of the Vivo V15 Pro — from the display, design, cameras, and more. That’s probably why the performance department might have been a little left out. 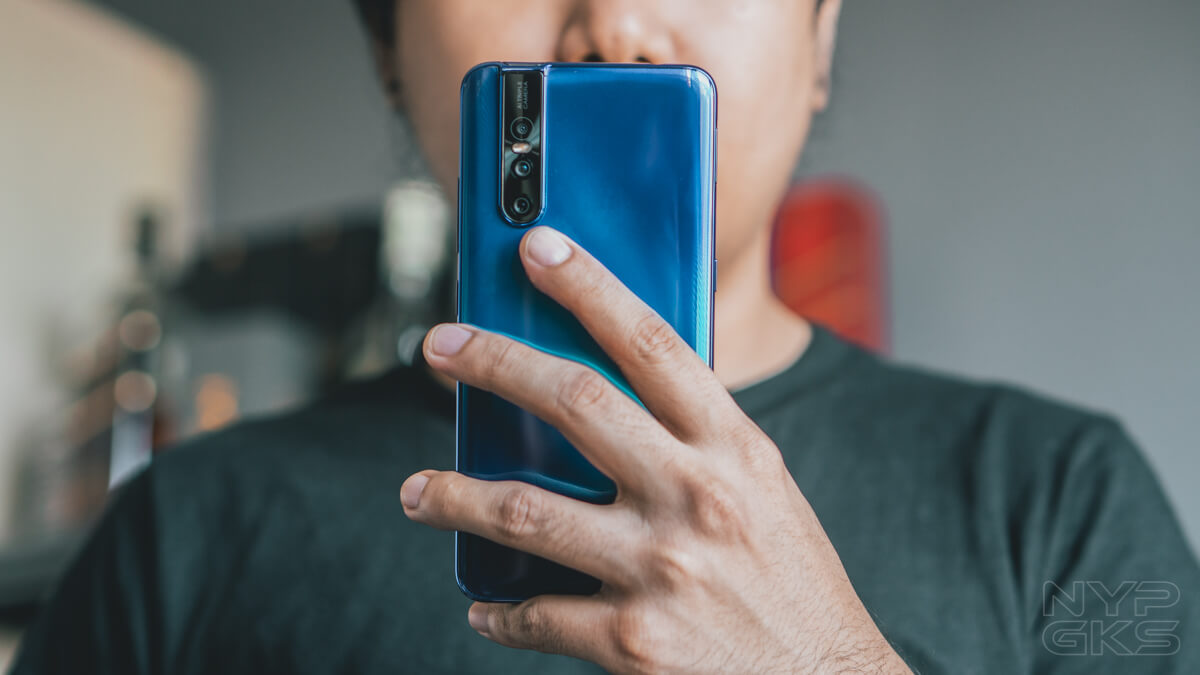 The Vivo V15 Pro is powered by a Qualcomm Snapdragon 675 processor, which is definitely not the best and the most powerful chipset you can have for the price. But on the upside, it does have a generous 8GB of RAM and 128GB of expandable storage (up to 512GB).

In terms of productivity and day-to-day tasks, the Snapdragon 675 was able to keep up. Backed by its roomy 8GB memory, you can launch a bunch of apps and go back and forth between them without any noticeable delay.

The chipset was also showing off during gaming. PUBG Mobile was playable at the highest setting, with really smooth frame rates and great quality. Other titles like Mobile Legends, Asphalt 9, and NBA 2K19 also ran pretty well.

Other than its processor and the Adreno 612 GPU, the Vivo V15 Pro also has different game modes and other game optimizations in the software level to make sure all titles run smoothly.

In-display fingerprint scanners are starting to become a norm in a lot of premium smartphones today, including the Vivo V15 Pro.

Vivo didn’t just embed a standard fingerprint scanner on the display. The company did some improvements in the hardware and software level, which made the biometric sensor work faster and more accurate. It can unlock the V15 Pro in a jiff, which almost matches the performance of the traditional fingerprint scanner. 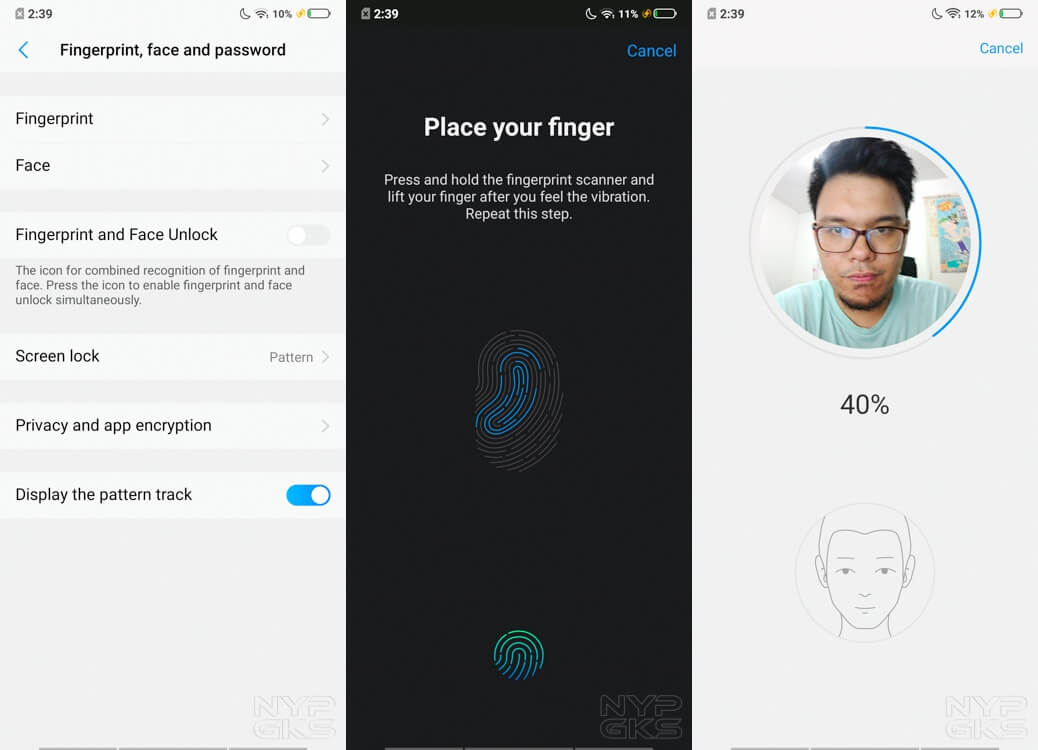 The face unlock method also works really well. If for some reason, you opt to use it instead of the more convenient fingerprint method, you can just swipe up from the lock screen and the front-facing camera will pop-up to detect your face.

Still, I would prefer using the in-display fingerprint scanner more as it’s more intuitive and faster to use. In addition, the Vivo V15 Pro has tons of privacy features like App and file lockers, block apps from accessing your notifications, and more.

Being their latest offering, Vivo rigged the V15 Pro with the latest Android 9 Pie with the company’s FunTouch OS 9 interface on top of it. 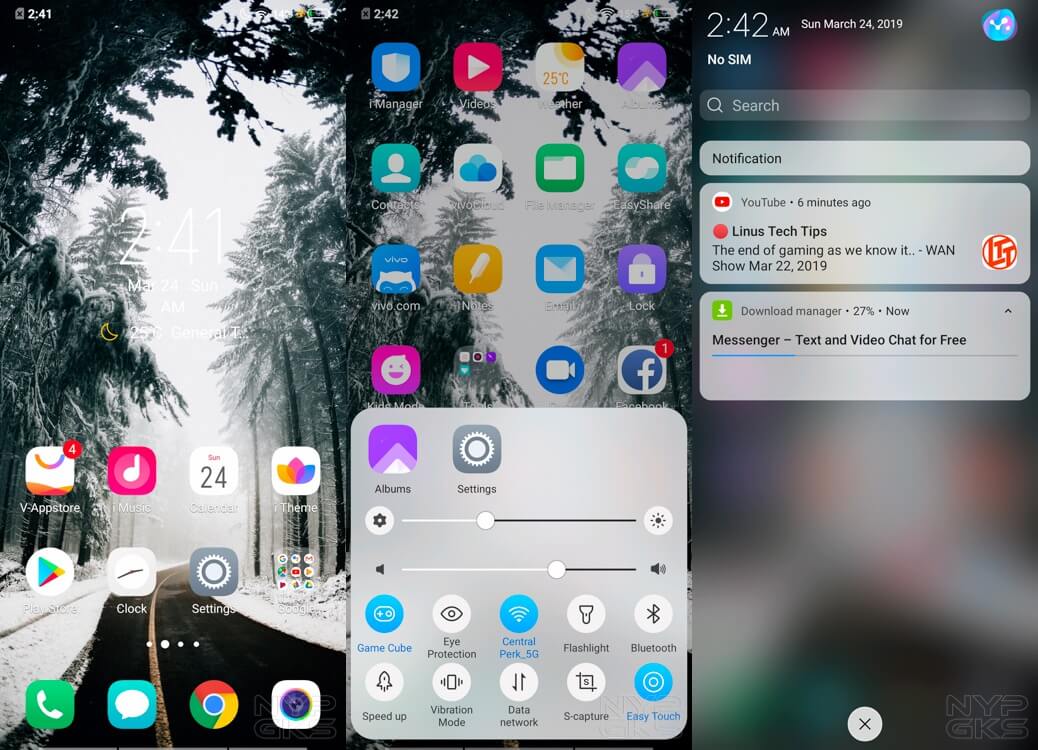 The entire look of the new FunTouch OS interface is similar to its predecessor. It has tons of similarities to Apple’s iOS, from the lack of the app drawer, notification center solely living on the top, and the control center sitting on the bottom. Actually, accessing things like the WiFi and Bluetooth toggle and recently used apps from the bottom is easier, especially for a screen this tall.

Swiping from the far left of the home screen shows the global search tab, quick access to most used apps, weather, todo list, contacts, and Jovi smart scene, and more. Speaking of Jovi, the Vivo V15 Pro features the company’s Jovi smart assistant. One of its key features is the Image recognizer. You can take a picture of an object and Jovi will see if it’s available for purchase online.

Upon testing, it does show search results from Shopee. Although it does struggle to find the right product most of the time. 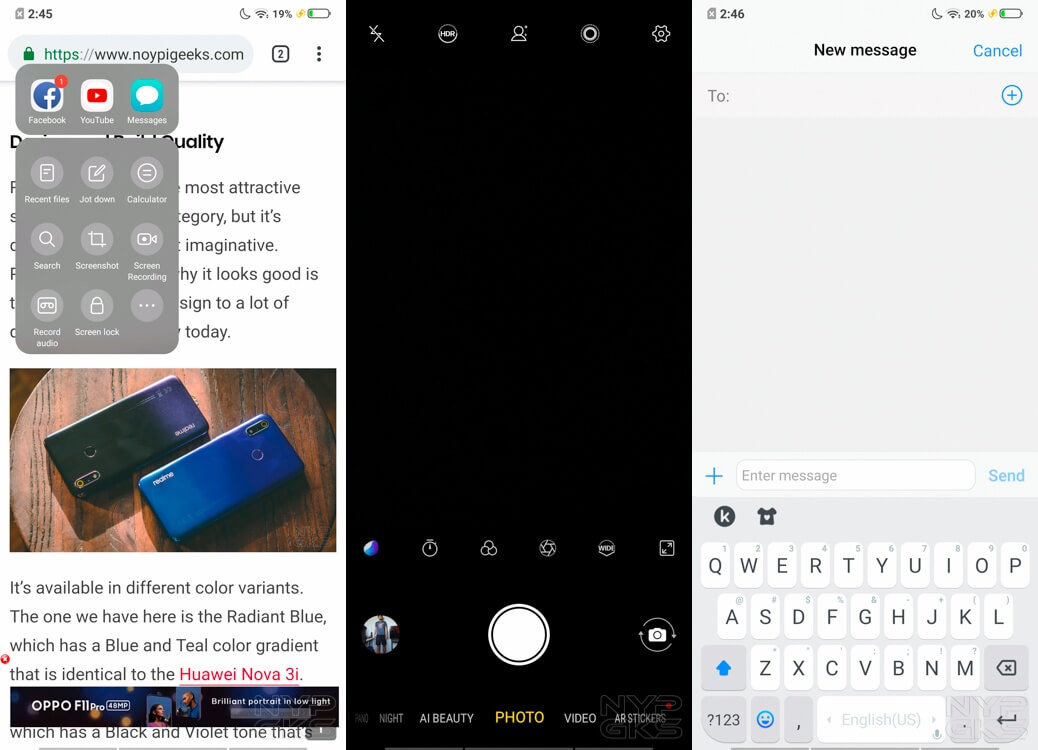 There’s also Easy Touch — a button is floating around the interface, which provides easy access to some necessary shortcuts like calculator, screen recorder, etc — all of which are customizable. It also gives you access to your recent apps. The button will sit in the corner of the interface so it will be less distracting.

The Vivo V15 Pro camera app is also identical to iOS, but with more toggles and settings to complement its feature-packed camera system. Vivo’s keyboard is also intuitive to type on and easy to get used to.

Vivo really went all out with the V15 Pro’s camera system. It highlights a 48-megapixel main shooter with an f/1.8 aperture, ultra wide-angle 8-megapixel shooter, and a 5-megapixel depth-sensor. 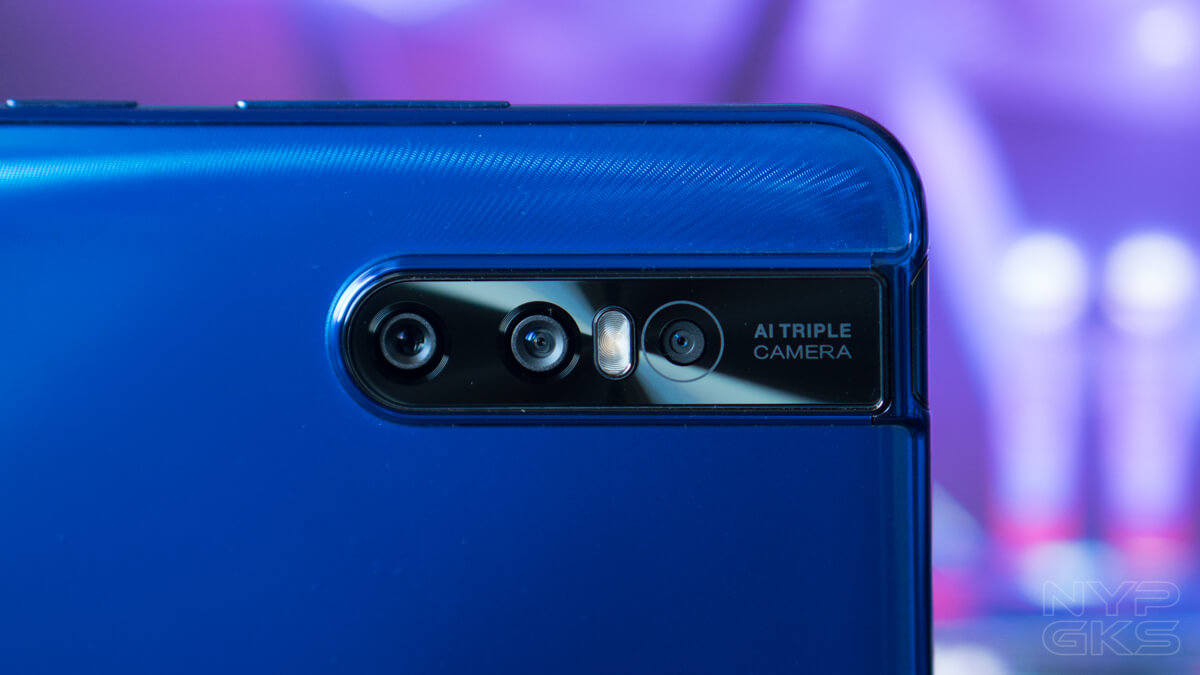 Vivo V15 Pro’s pixel-packed sensor takes images with great detail, which is unsurprising considering the large pixel count that it has. The colors also look realistic with deep contrast that makes images you take from it Instagram-ready. Dynamic range is also spot on.

Its 8-megapixel ultra-wide shooter also churns out great images. The extra-wide field of view lets you cram in more subjects in a single frame, without having to move far away from the subject just to fit everything in.

However, since it has a lower-resolution sensor, the details and overall quality is not on par with the main sensor.

The 5-megapixel depth-sensor also did a great job of isolating the foreground from the background, creating a believable shallow depth-of-field effect. You can also adjust the focus point and blur intensity after the shot is taken.

Vivo is stepping it up further by introducing AI Body shaping. There are tons of options available from the camera app — whole body slimming, head shoulders, waist, legs, and hips. What’s more surprising is that it can even make your legs look taller.

As you can see on the Vivo V15 Pro camera samples above, the feature worked really well. However, we saw some background distortion in some shots, as you can see below.

The Vivo V15 Pro utilizes a 3,700mAh battery to keep it all juiced up. And for charging, the device features the company’s Dual-Engine fast charging technology. 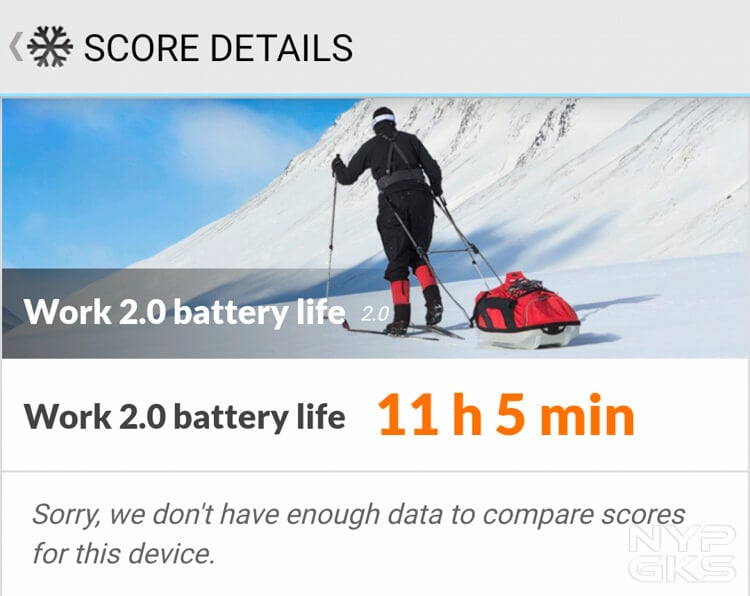 As for the battery performance, the Vivo V15 Pro was able to bring good, but not the best, longevity that we saw on a smartphone. It got a score of 11 hours and 5 minutes of screen-on time in PCMark’s battery test before reaching the critical 20% level.

This means that you can easily last throughout the day of light to moderate usage on this device. That can be shortened if you’re a hardcore gamer or binge-watching on Netflix, but the battery drain wouldn’t be as harsh as other devices with smaller capacity. 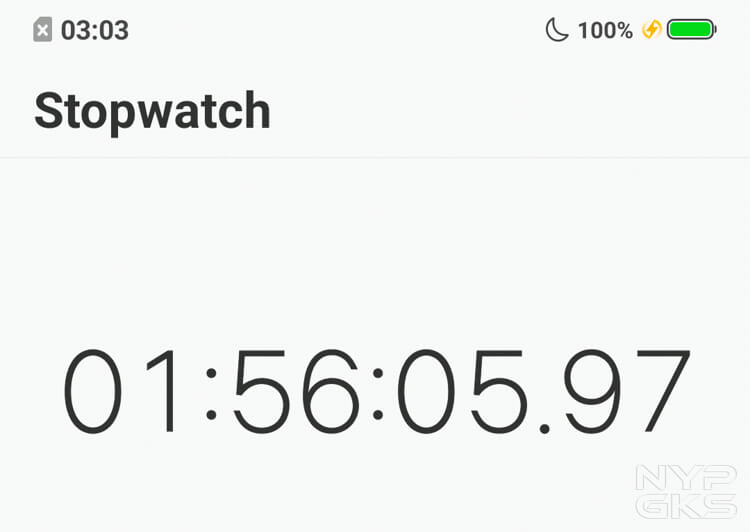 The Dual-Engine fast-charging also did a decent job. It may not be the fastest, but we’ve definitely seen worse. It was able to fill up the battery back to 100% from 23% in 1 hour and 56 minutes.

The Vivo V15 Pro is clearly a showcase of everything that’s new in the industry today. Although not a lot of people might be convinced with Vivo’s processor of choice, still, this device has great potential. 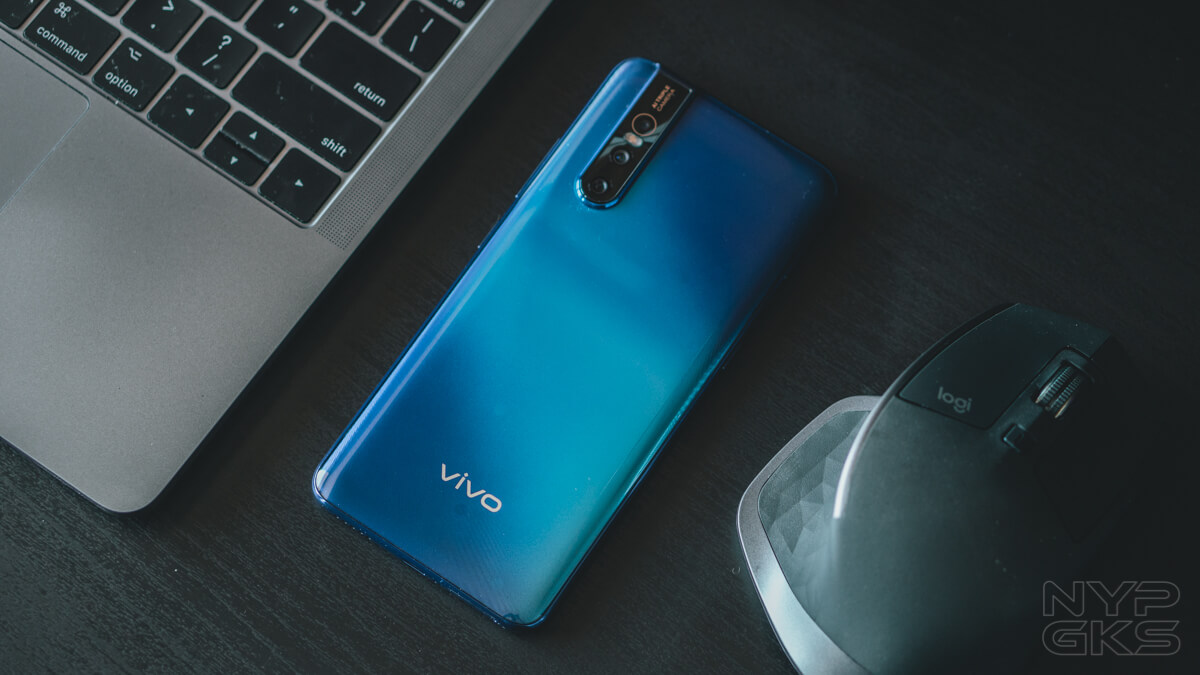 Vivo V15 Pro boasts a large, colorful, and sharp display with a fingerprint scanner embedded with it. The in-screen biometric system also works incredibly well that it’s way past its novelty phase.

Of course, we also have its killer camera setup. If you’re bored taking well-detailed and vibrant photos on its 48-megapixel primary camera, you can mix it up a bit by getting creative with its ultra wide-angle camera. 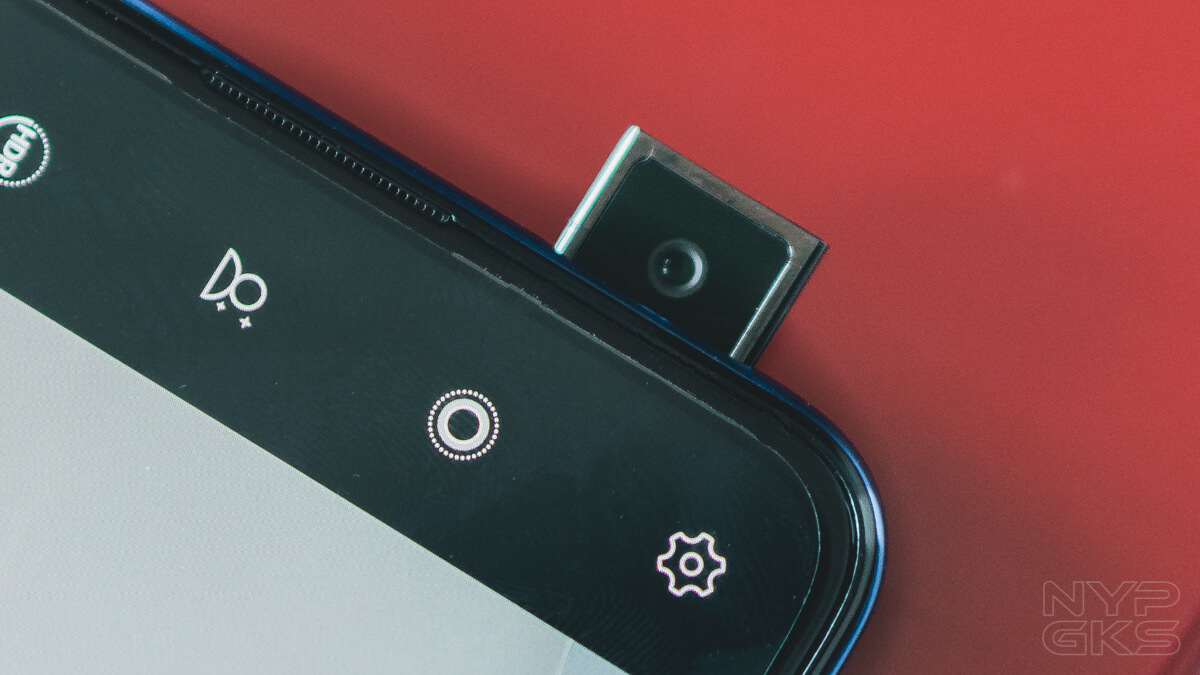 You can enjoy all of the Vivo V15 Pro’s feature for long thanks to its really reliable battery, which can easily last you for a day or two.

However, using a Qualcomm Snapdragon 675 on a Php20,000+ clearly isn’t the most ideal of all. Although it was able to perform well in multitasking and gaming during our tests, those people who prioritize performance above everything else might want to skip this one.

But if a device that has a lot of neat tricks and modern features to show off is what you want, then you might want to check out the Vivo V15 Pro.

Pricing and Availability of the Vivo V15 Pro

The Vivo V15 Pro has an official retail price tag of Php23,999. You can pre-order it from March 21 to 29 and get a free Bluetooth speaker, premium NBA case, 6-month screen protection warranty, and a 6-month extended phone warranty.