After months of leaks and speculations, the new Samsung Galaxy Note 9 is finally official. However, it didn’t live up to the hype as it only comes with minimal updates from its predecessor.

But nonetheless, the Galaxy Note 8 is already an impressive device by itself, making it really hard to top. So with the Galaxy Note 9, what we are getting is a more refined and polished smartphone.

Before we get to the new and interesting features of the Samsung Galaxy Note 9, let’s first get the pricing and specs out of the way.

The S Pen is one of the biggest features of the Galaxy Note series. Its previous iterations only provided little to insignificant updates, from improved gesture recognition and writing experience. But with the Samsung Galaxy Note 9, the S Pen just got more useful. 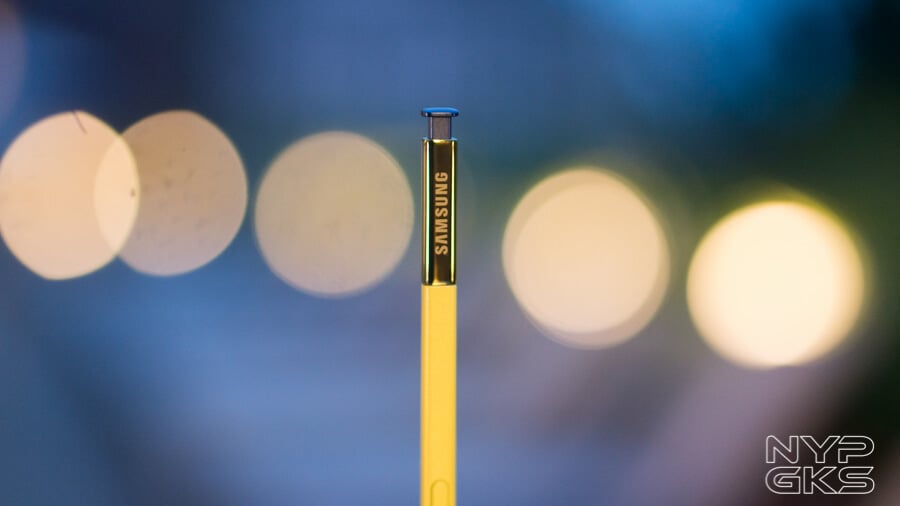 The Samsung S Pen now has built-in Bluetooth connectivity, which unlocks new tricks for this accessory. For one, you can now use it to control the camera. Instead of using a timer or a third-party accessory, you can now use the S Pen to take a shot or switch to the front or rear camera.

You can also use it as a remote while doing a presentation, skip music tracks, or browse through the gallery. As time goes by, we expect it to get more functions for everyday use.

It appears that the previous rumors were true. Samsung did recycle the dual cameras found on the Galaxy S9 Plus to the Galaxy Note 9, which is why we have a 12-megapixel camera with 2x optical zoom and an aperture of f/1.5-f/2.4 here. 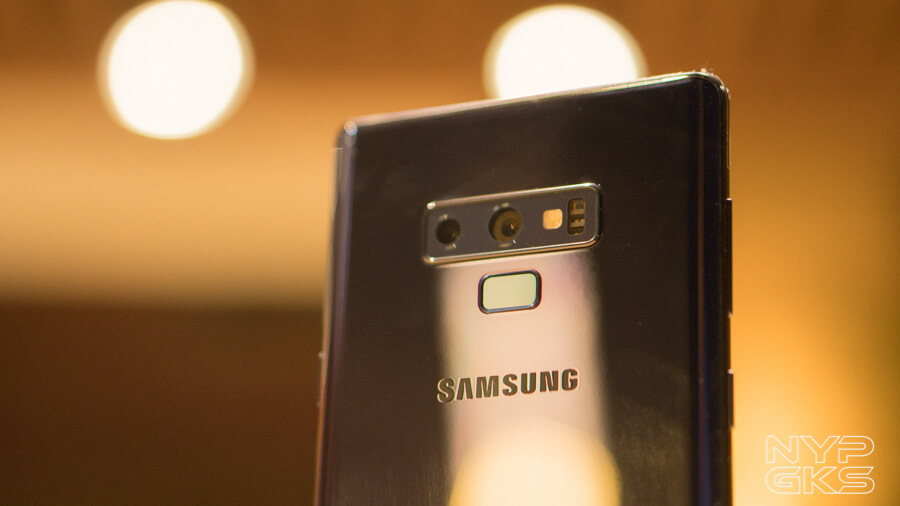 However, what’s really new here is its AI capabilities, or as what Samsung likes to call it, the “Intelligent Dual Cameras”. Just like what other devices are doing, the Samsung Galaxy Note 9 can detect the scene that you are shooting, and automatically adjust the settings for the best possible photo.

Other than the quality optimization, the camera also has an “Auto-detection assistance” which tells you if the image you’ve taken is blurry, someone blinked, against the light, or the lens has a smudge.

In their previous flagships, Samsung DeX only works if you purchase the proprietary accessory. But now, the feature comes built-in on the Samsung Galaxy Note 9, a feature that was also implemented on the new Galaxy Tab S4. 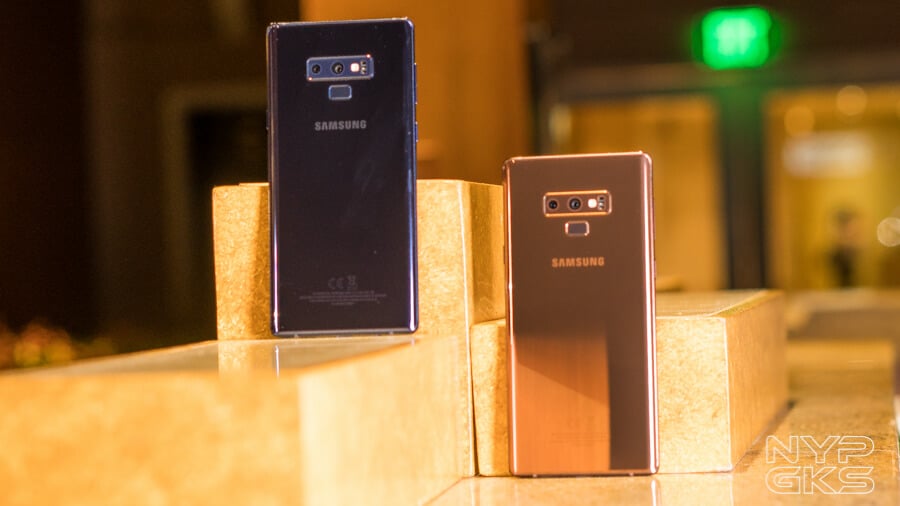 All you need is an external monitor and a USB Type-C to HDMI cable and you’re good to go. Once plugged in, Samsung DeX will display a desktop-like interface, which mimics the experience of using a real PC.

Your smartphone then turns in to a touchpad, so you can control the Galaxy Note 9’s interface on the big screen.

Of course, it wouldn’t be a Galaxy Note device without the powerful performance. The Samsung Galaxy Note 9 is powered by two of the best chipsets around. The one we’ll be getting here in the Philippines is the Exynos 9810 variant. Meanwhile, other markets will get the Qualcomm Snapdragon 845 model.

To avoid overheating, the smartphone has a dedicated heat pipe and a carbon sheet for proper cooling.

The Samsung Galaxy Note 9 comes with up to 8GB of RAM and up to 512GB of storage. Samsung is also emphasizing that if you get the 512GB variant and add a 512GB microSD card on it, it will have a total of 1TB of storage.

There were rumors about Samsung releasing a notch-equipped smartphone. But thankfully, that didn’t happen on the Samsung Galaxy Note 9. 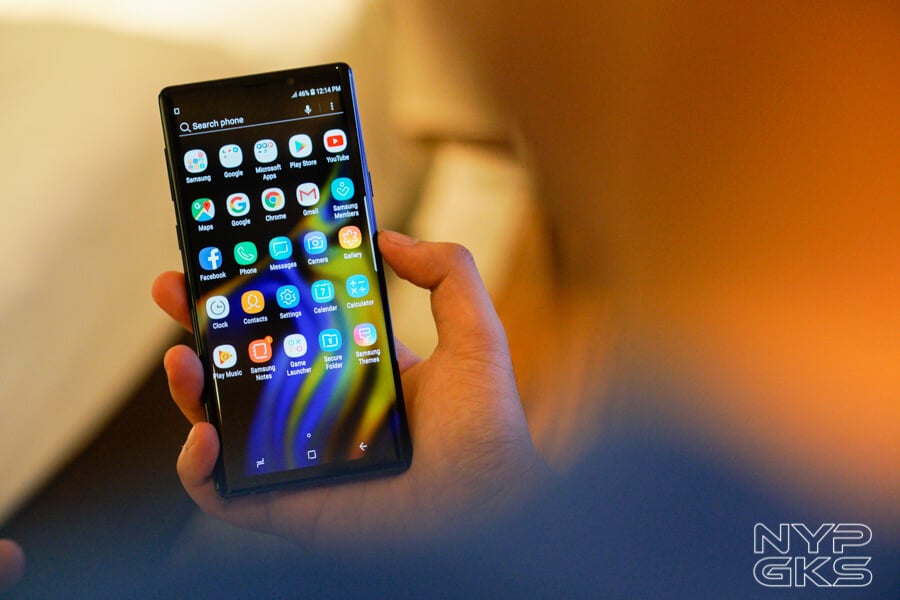 What we have here is Samsung’s signature Infinity display with curved edges and a minimal bezels on the top and bottom.

The screen size is set at 6.4-inches, together with a Super AMOLED panel and a Quad HD resolution. Samsung makes the best smartphone screens in the industry, and we’re definitely seeing the same experience on the Samsung Galaxy Note 9.

One of the key selling points of the Galaxy Note series is its large batteries. Due to its enormous body, Samsung was able to cram in a chunky 4,000mAh battery on the Samsung Galaxy Note 9 — the biggest ever in any Galaxy Note device. 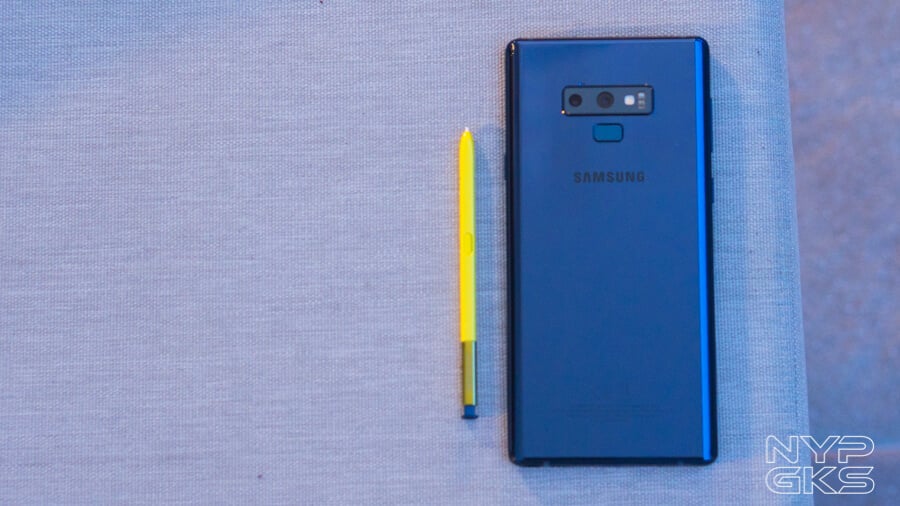 Samsung promises an all-day battery life from the Galaxy Note 9. While there’s a huge chance that it’s achievable, we’ll reserve our verdict in our full review once we test it out.