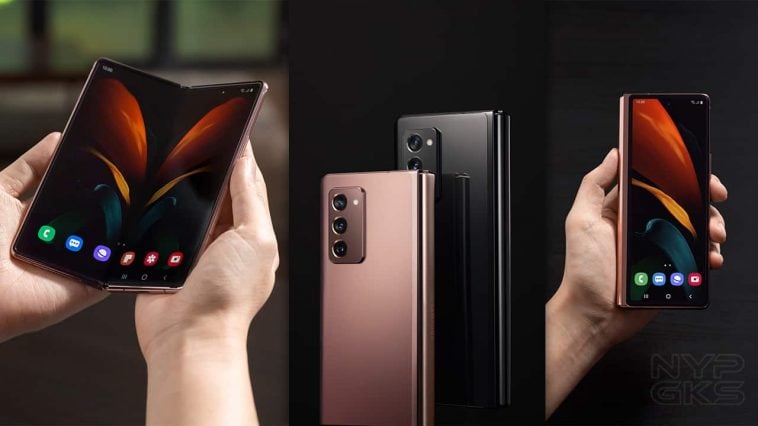 The Samsung Galaxy Z Fold 2 have been fully unveiled after the company wrapped up its Unpacked Event part 2.

Samsung initially teased the Samsung Galaxy Z Fold 2 during the first Unpacked 2020 event for the Galaxy Note 20 series. They initially revealed the improved design, new Mystic Bronze color, and the larger cover screen. Now, we have the full specs list.

UPDATE: Check out our full review of the Galaxy Z Fold 2.

The main highlight here is the foldable screen on the inside. It’s at 7.6-inches and has thinner bezels compared to the original Galaxy Fold. While on the outside, the secondary screen looks less awkward and more comfortable to use as it’s now at 6.2-inches — also with thin bezels. Albeit, it only has an HD+ resolution.

Under the hood it’s powered by, thankfully, a Qualcomm Snapdragon 865 Plus processor, with 12GB of RAM and 256GB of expandable storage. A 512GB model is also being made, but it will be sold exclusively to China. The hardware is then coupled with a 4,500mAh battery with fast wired and wireless charging.

The cameras are pretty similar to the vanilla Note 20, but this time, it has a total of five sensors. We have three on the back, one selfie camera for the outside screen, and another for the main display on the inside.

Samsung also implemented its third-gen design dubbed as the Hideaway hinge, which we also saw on the Galaxy Z Fold 2. Also, it would be weird to have two in-display fingerprint scanner, so Samsung just went with a single side-mounted one.

The Samsung Galaxy Z Fold 2 has a price of USD1,999 (around Php97,000) and will be available in select markets starting September 18. Its official price in the Philippines will be announced very soon so check back on this article for that.