Starmobile may have just done something that is clearly unimaginable; a smartphone that is not just under the Php5,000 mark, not event Php3,000, but under Php1,500. Well, Php1,299 to be exact.

The Starmobile Play Click is probably one of the cheapest smartphone in the market today, is shaking up the industry. The device almost instantly went out of stock from the day of its release, and that’s expected.

But it’s not really Php1,288. The original SRP of Starmobile Play Click is Php2,690, but with the partnership with Smart, it’s been subsidized and released as a bundle to their promo prepaid kit.

Today, we’re taking a look at this thing. I am actually curious what you can get out of a Php1,299 smartphone. Let’s all figure that out. (If you’re in a hurry, we have a video review at the end of this article)

There’s nothing exciting here, which is really expected for such cheap smartphone. However, I’d still like to commend Starmobile for the build and aesthetic of the Starmobile Play Click. Sure, it is all made with plastic and cheap construction; but, the device doesn’t feel Php1,299-cheap. The mixture of the just right thickness and unique design makes it comparable with the devices on the Php3,000 to Php5,000 range.

The 4.7” profile also made it very compact and pocketable. The extra chunkiness even made it more ergonomic than the same-sized iPhone 5s. It can easily fit in any hands, small or large, perfectly. The Starmobile Play Click has weight to it for its size, but still relatively unnoticeable.

The device comes in three different colors; black, gold, and gray which is our current review unit. On the negative note, the back panel is really prone to scratches, so you might wanna be careful onto where you place this thing. I had this device inside my bag together with my power bank and it caused a little bruise on the device.

It also has sharp corners, which makes it look like a brick. Going this route feels very refreshing since most devices today have rounded corners. However, on the comfort side, I would still prefer those subtle rounded corners, since it feels more comfortable in the hands.

Taking a tour, we have the said 4.7” TN display in front, together with the 2-megapixel front-facing camera, capacitive buttons at the bottom, and of course, that flashy Smart logo.

Left side is clean, while the right side has the lock/power button beneath the volume controls. The buttons are pretty tactile but it doesn’t give that satisfying feeling when pressed.

At the top, we have the headphone jack and microUSB port, which is for me is not the best location for ports. Using the device while it is plugged in from the top feels like it is being strangled. I believe they are best situated at the bottom, which in the case of this device, only has the only built-in microphone.

At the back, we have the 5-megapixel primary camera with LED flash, caged with this aesthetically pleasing rounded glass. We also have the loudspeakers at the lower portion, which offers average sound quality and volume. 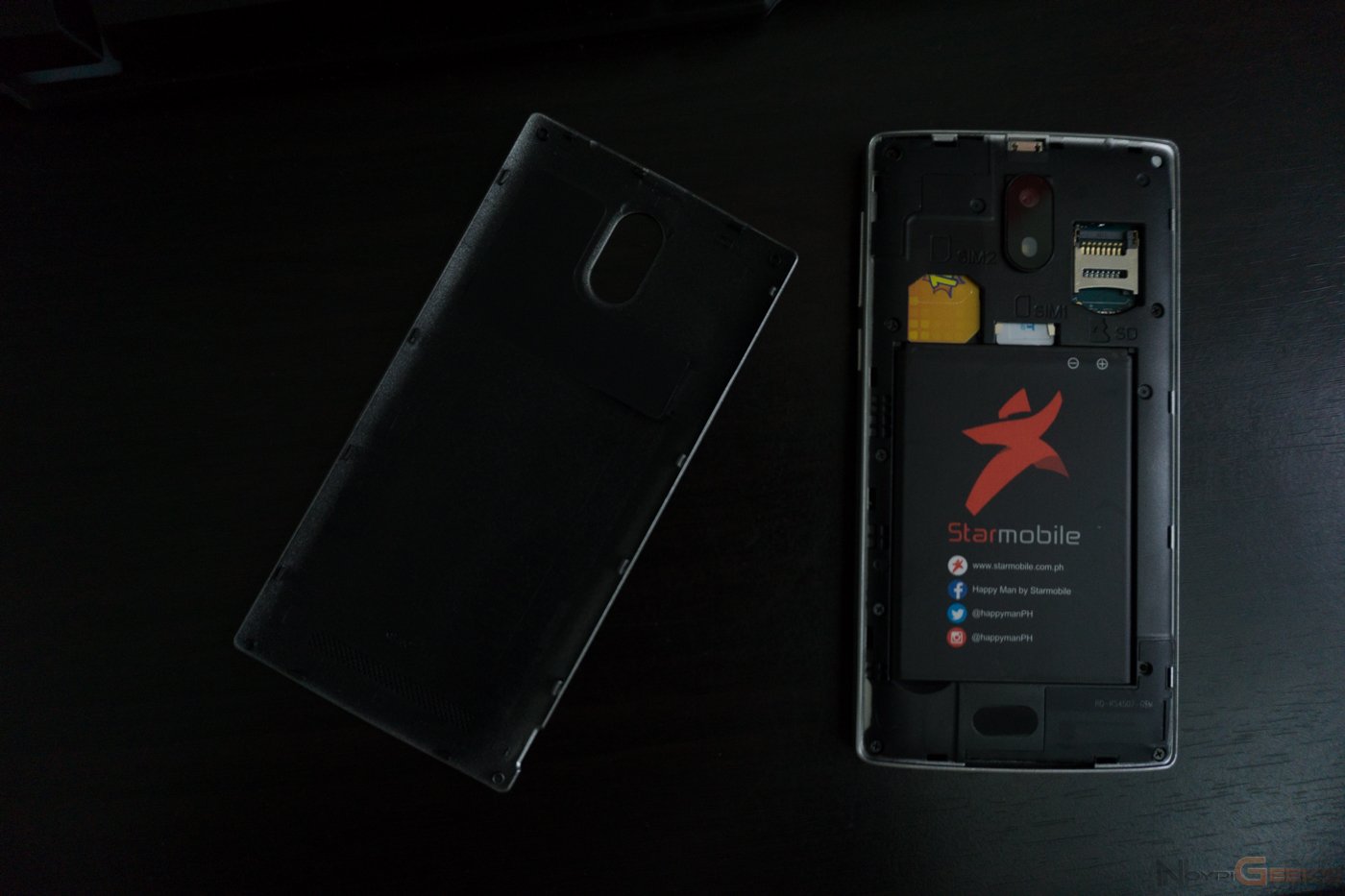 Removing the super-thin and flimsy back panel reveals the two standard-sized SIM card slots and the removable 1650mAh battery.

The Starmobile Play Click’s 4.7” TN display has an FWVGA 480×854 resolution, which only has 208 pixels-per-inch. Definitely not the most exciting panel of all, but still pretty admirable for the price. 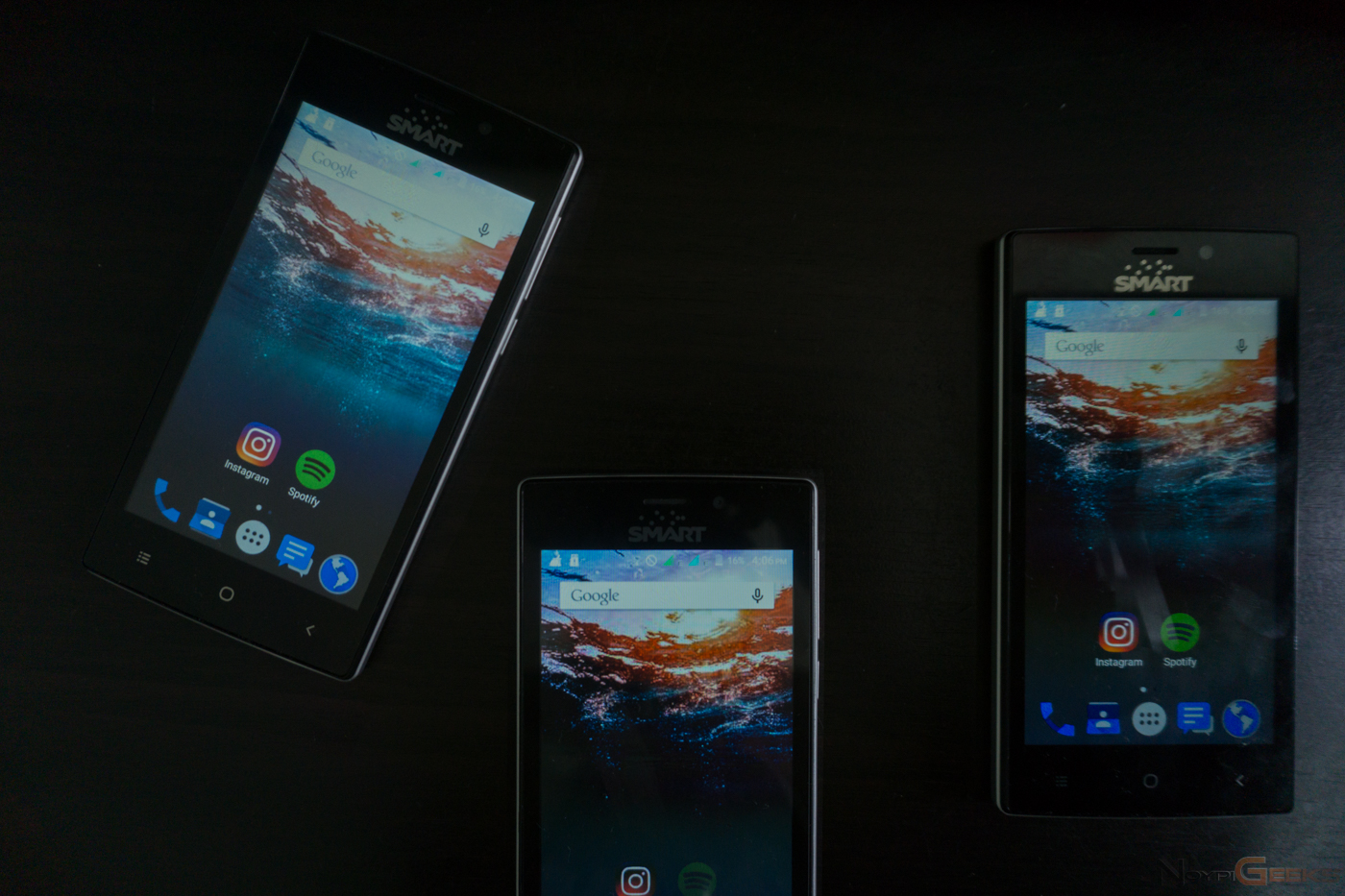 With that said, display quality is just suitable for the price. Colors are a bit on the yellowish side, sharpness is crap, while the saturation and contrast are a bit uninspiring. Viewing angles are also horrible, which is one of the primary Achilles heel of TN panels. Screen brightness is also middling.

The Starmobile Play Click has a 1.2GHz quad-core ARM Cortex-A7 processor inside. With 512MB of RAM, and Mali 400-MP2 graphics card. It’s been awhile since I have seen a device with only 512MB of RAM, but then again, and I might now sound like a broken record, but this thing is too damn cheap.

Processing performance is really expected. The processor was able to handle nothing but the basic and casual games. Switching between applications was a huge struggle. Even social media software have slow app starts.There are also some occasional hiccups when browsing the interface.

But nevertheless, for what it’s worth, this thing delivered to what it is only capable of. Check out these benchmark test results:

The device also only has 4GB of internal storage, with only 1.56GB usable. The in-house storage can only store your basic day-to-day apps like Facebook, Instagram, etc., but you might want to install a microSD card for extra space.

We got an Android 5.1 Lollipop that’s running on the Starmobile Play Click. It would have been nice to see a Marshmallow version on this thing, as it offers better performance and battery management, which is perfect for this well-compromised device. Plus, Marshmallow just looks a bit better with tons of added features and quirks. But at only Php1,288, can we really complain?

Nevertheless, Lollipop still tastes so sweet on this thing. The chipset inside might be limiting, but the user-interface still looks like it is trying its best to cope up.

The interface looks exactly what Android should like, thanks to local manufacturer’s idleness in skinning their devices. Not only that it looks basic and bold, it also lessens the chance of the device’s being slowed down.

We got a 5-megapixel primary shooter and a 2-megapixel front-facing one in this thing.

Of course, the primary camera can take lackluster photos. Which is fine, since this device isn’t really focused on shooting; it even doesn’t have autofocus. Colors reproduction looks lackluster, with dull saturation and contrast. Dynamic range is surprisingly okay, but not something to brag about.

The front-facing sensor also entails the same sentiment. Depending on your tolerance, it can sure take viewable selfies; but it sure is passable for video calls on either Skype or any other platform.

Based on the price alone, we can expect that this phone doesn’t have all the bells and whistles of other high end smartphones in terms of connectivity.

The Starmobile Play Click is only capped to 3G connectivity. But that’s okay, as it’s already very good for everyday use. And at this price point, it’s really hard to complain.

Anyhow, network speeds may still be passable to some scenarios. Browsing through Facebook, Instagram, and any other social media apps are pretty much okay; but if you wanna go bananas on web browsing, make sure you have a really stable 3G connection.

The Play Click also have Bluetooth  4.0 and WiFi 802.11 a/b/g/n/ac. Both antennas performed well on my tests, no dropped signals were encountered.

And keeping this thing all juiced up is a 1650mAh battery, which has a pretty satisfying longevity. Screen-on time passed our four-hour passing mark. That’s hours of video streaming online and gaming. The device can also last you for a whole day with light to moderate usage. 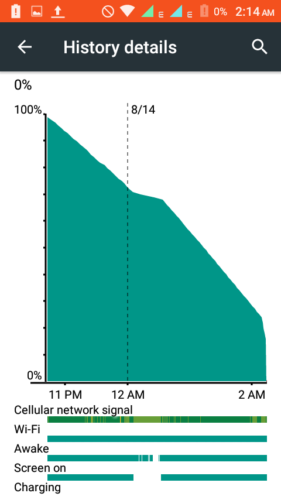 So, is the Starmobile Play Click an interesting device? Yes, definitely. This budget smartphone is clearly not for those who are needy. Not for people who are wanting a device that is flashy and muscle-y. It’s a Php1,299 smartphone for crying out loud. 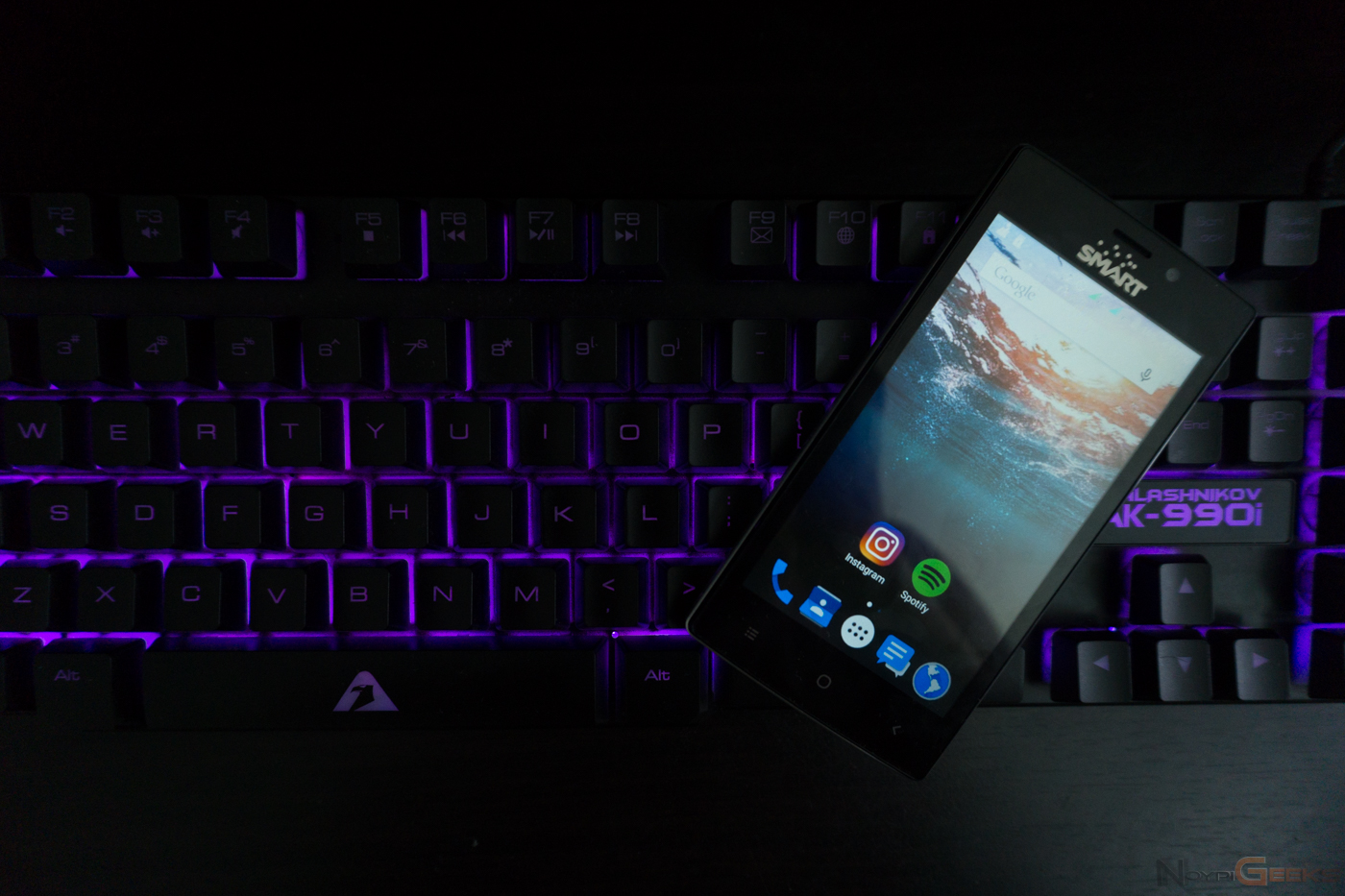 If you are in the market for a straightforward device and thinking of getting a dumb phone instead that costs more or less than Php1,000, then I think you are better off with the Starmobile Play Click. The extra few hundreds of pesos will be really worth it in the long run.

The SMART Prepaid Kit includes a FREE load card,100MB data per month for one year, and Php30 monthly load rebate if you load at least Php100/month, and a free TNT SIM. For only Php1,288, it’s definitely a GREAT deal!