Even though it was heavily hyped, the Xiaomi Black Shark gaming smartphone was still able to exceed expectations with its incredible hardware. Not only that, but it’s priced at just CNY 2,999 or approximately Php24,800 when directly converted to Philippine peso, which makes it an even more lucrative buy.

Like its direct competitor, Razer Phone, the Xiaomi Black Shark sports the black and green color scheme. We’re not sure why they did it, but it’s probably the same reason why MIUI looks a lot like iOS. Anyway, that’s not really a problem, as the design is sleek and innovative.

The Xiaomi Black Shark gaming smartphone is equipped with a powerful Qualcomm Snapdragon 845 processor with a choice between 6GB and 8GB RAM options. All the games and heavy software is handled by an Adreno 630 GPU — one of the best in the market today. To prevent its beastly hardware from heating up the whole device, the company has a multi-stage liquid cooling system set up.

Benchmark score in AnTuTu reached almost 280,000 points. While that is definitely the highest right now, an upcoming Huawei smartphone recently got leaked and it scored over 350,000 points.

XIaomi Black Shark smartphone has a screen of 5.99-inches with Full HD+ resolution, 18:9 aspect ratio, and a DCI-P3 wide color gamut of up to 97 percent. Meanwhile, using it in direct sunlight will be not an issue as it can go up to a very bright 550 nits. 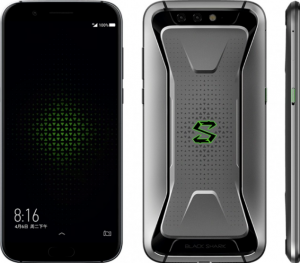 Aside from the actual smartphone itself, Black Shark also revealed the controller dock that comes with a trigger button and joystick to make the gaming experience on the phone even more immersive. Unfortunately, it does not come with the package of Xiaomi Black Shark, so consumers have to buy it separately for CNY 179 (~Php1,500).

The price of the Xiaomi Black Shark 8GB RAM + 128GB model is CNY3,499 (~Php29,000). It’s already listed on the official China website of Xiaomi and in e-commerce sites JD.com and YouPin. It will be available for purchase beginning April 20. International pricing and availability are currently unknown as of the moment. Hopefully, Xiaomi Philippines would kindly bring this bad ass smartphone in the country.