We can’t help but notice the strong similarities with the late Galaxy Note 7. But that’s okay, it’s no longer available in the market anyway.

The Mi Note 2 features a dual-curved glass design on both sides. And if that still didn’t ring a bell, how about a 5.7-inch OLED curved display? Yes, both sides, too. But contrary to what rumors said, it’s only a Full HD resolution instead of Quad HD. The panel is flexible, so we have to wonder if this device actually contains Samsung parts in it.

An impressive 77.2 percent screen to body ratio is also one of the highlights of the Mi Note 2. The renders look amazing and it can’t be denied that it borrowed design cues from the Galaxy Note line. But that’s not a bad thing, they’re well designed so I don’t think anyone would complain. 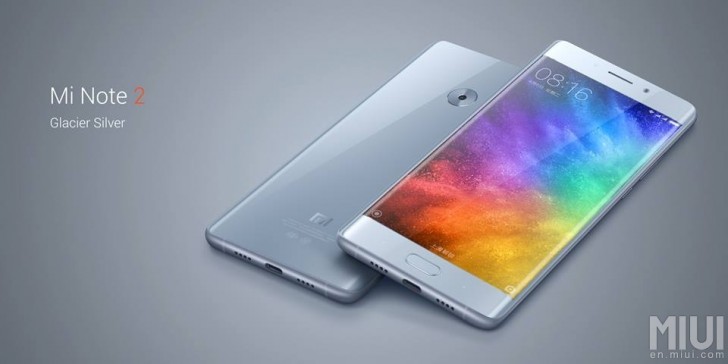 It’s running on Qualcomm’s Snapdragon 821 chipset with a clock speed of up to 2.35GHz.. There’s a fast UFS 2.0 storage as well, coming in on either 64GB or 128GB. Mi also included a large 6GB of LPDDR4 RAM on the high-end model, while the more affordable variant ships with 4GB.

The Mi Note 2 doesn’t have a dual-camera setup. It’s quite surprising that they didn’t jump on the bandwagon this time, noting that they often get inspiration from Apple in the past. Instead, it carries a 22.56-megapixel Sony IMX318 Exmor sensor at the back. It also has EIS digital stabilization, f/2.0 lens, and video recording of up to 4k quality. Other features include phase detection and contrast autofocus, two-tone flash, low-light enhancement technology, and 32 seconds long exposure shots. 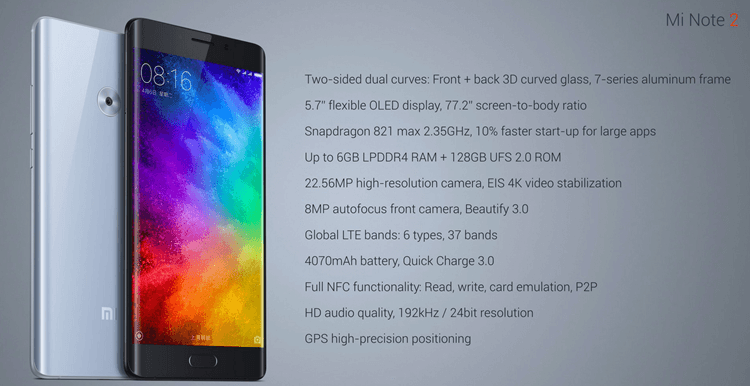 It supports 6 network types of LTE and 37 band types throughout the world. There’s also NFC and a high-precision GPS module.