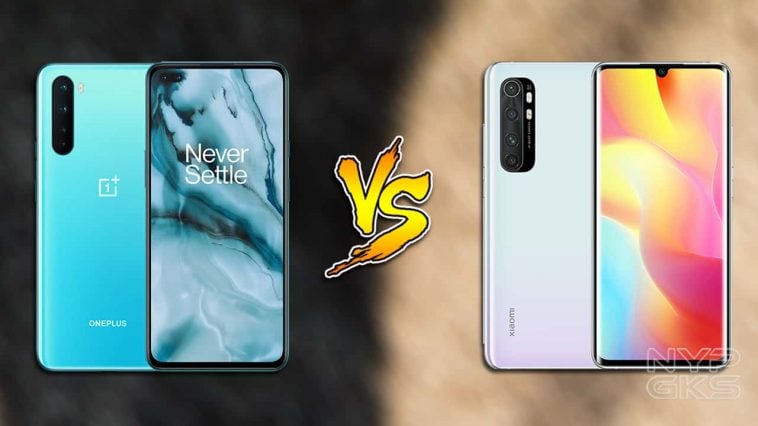 OnePlus have finally revealed its latest midrange phone after months of leaks and speculations.

The OnePlus Nord was released to provide the same no-compromise experience that its flagship brothers offer but at a cheaper price tag.

It’s been a long time since we’ve seen OnePlus create a midrange phone. So the question is, were they able to do a good job?

UPDATE: The OnePlus Nord 8GB/128GB has a price of Php21,990 in the Philippines. Check availability and payment options for more info.

We’ll be comparing it with the Xiaomi Mi Note 10 Lite to answer that question. This device is considered as one of the best value-oriented options in this price range, making it a worthy benchmark to every new mid-range phone that comes out.

Ultimately, here in our OnePlus Nord versus Xiaomi Mi Note 10 Lite specifications and features comparison, we’ll which between these devices is worth your time and money.

Both the OnePlus Nord and Xiaomi Mi Note 10 Lite come with sturdy body. They are sandwiched with Corning Gorilla Glass 5 and held together by an aluminum chassis.

The Mi Note 10 Lite looks more premium thanks to its curved screen — a rare sight in midrange phones like this. However, it’s relatively heavier and thicker than the competition.

The OnePlus Nord is only available in two color options, but the Blue Marble sure is attractive and out of the ordinary with its teal-like appearance. If it’s not your cup of tea, a more subtle Gray Onyx color is also available.

We also liked how OnePlus went with a more modern punch-hole for the selfie camera, instead of the waterdrop notch on the Mi Note 10 Lite.

The two both have identical 6.4-inch FHD+ AMOLED screen, with their respective lead over the other.

With the Mi Note 10 Lite, you’re getting HDR10 support, which is great for watching compatible movies and videos.

But personally, we’d prefer the 90Hz refresh rate that you can get from the Nord. It will essentially make everything smoother — from browsing the interface to playing games.

It’s no secret that the OnePlus Nord costs more than the Xiaomi Mi Note 10 Lite. The main reason behind that is in the processor they have.

The Mi Note 10 Lite come with a Qualcomm Snapdragon 730G processor. It’s still decent for the price, but obviously has nothing against the Snapdragon 765G of the Nord.

Besides having an edge in performance, this latest chip from Qualcomm brings 5G connectivity to budget phones like the Nord.

OnePlus’s offering also has the newer Bluetooth 5.1 and NaVIC. But to Xiaomi’s credit, the Note 10 Lite do have an IR blaster and a headphone jack, which are both missing in the competition.

The Mi Note 10 Lite may have a sharper 64-megapixel main camera, but the optical image stabilization (OIS) on the OnePlus Nord ensures that it takes sharper and brighter images, even in low-light. The rest of the rear cameras (ultra-wide, macro, and depth sensors) are the same.

This obviously another win for the Nord, especially when you look at their cameras on the front — where the OnePlus device has two, while the latter only has one.

The OnePlus Nord will take sharper selfies with its 32-megapixel sensor. Plus, there’s the 8-megapixel ultra-wide lens for group shots, no selfie stick needed. On the other hand, the Xiaomi device only has a single 16-megapixel front camera.

Here’s a clear win for the Xiaomi Mi Note 10 Lite. This thing comes with a 5,260mAh battery, while the competition only has 4,115mAh. With its larger battery, and standard 60Hz screen, expect to get a couple more hours out of the Mi Note 10 Lite’s battery.

But since it has a smaller battery, expect faster charging times on the OnePlus Nord. Its Warp Charge 30T, a standard that’s also seen in OnePlus flagships, promises 70% charge in only half an hour.

If specs — and specs alone —is going to be our primary basis, the OnePlus Nord definitely won this specs comparison. It offers a smoother display, faster processor, 5G connectivity, and better cameras.

For the same configuration, you can get the Xiaomi Mi Note 10 Lite for Php18,990 in the Philippines. A cheaper 6GB/64GB variant is also available for Php16,990.

So unless you’re really into 90Hz screens and your area has 5G coverage, I’d say that compromising to the Xiaomi device is not a bad idea.