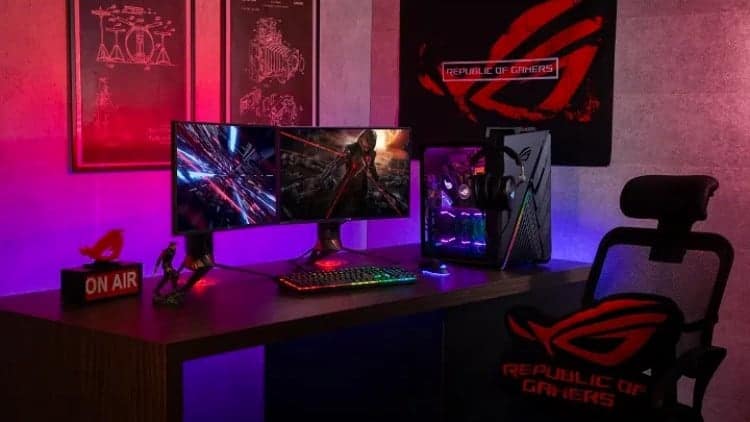 The ASUS ROG Strix G35DX features an up to AMD Ryzen 9 3950X 16-core processor and ROG Strix GeForce RTX 2080 Ti GPU onboard. It also has AIO liquid CPU cooling, hot-swappable drive bays that has support for PCI Express 4.0 SSD storage expansion,  up to 32GB of RAM, up to 2TB + 1TB of SSD hybrid storage and Keystone II.

At the top, there’s a carrying handle which can support a sustained force up to 30kg. In addition, there’s a hidden headphone hook that can carry weight up to 3kg and will still be able to endure about 10kg of momentary force.

It is available in two configurations, 1TB + 256GB SSD and 1TB + 512GB SSD. Its Wind Shear design is optimizing desktop cooling by splitting the hardware in 2 separate cooling zones to enhance its air-flow. The main chamber houses the motherboard, CPU, and GPU while below the power supply is the storage bay. The exterior panels vents of the gaming desktop was expanded to produce a stealth noise level of under 35 dB when maxed out with gaming.

Customers who will purchase the new ROG Strix G15DH from August 21 to September 20, will pay only Php99,995 instead of Php113,895 for the ROG Strix Go 2.4 Wireless Headset and ASUS TUF VG279QM Gaming monitor, as an exclusive bundle. This promo can be bought exclusively at ROG Concept Stores in Gilmore, SM Megamall, SM City Davao, SM North Edsa, and SM City Cebu.