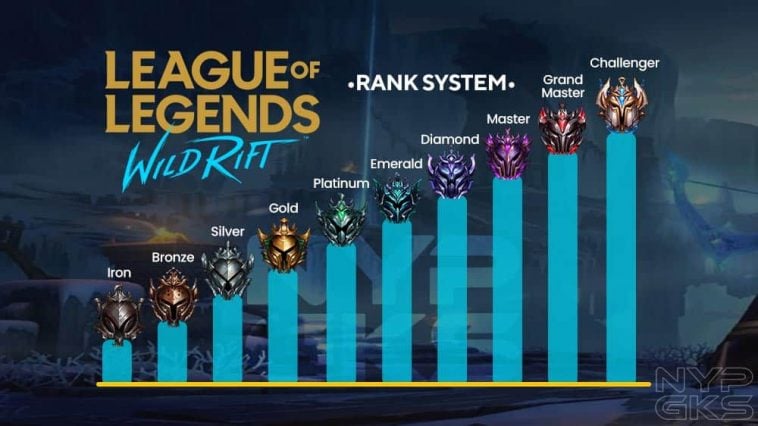 One good way to prove your talent in League of Legends: Wild Rift is through the game’s ranked system. Naturally, skilled players belong to the top. Read on to find out how to move up the ranks.

What are the League of Legends Wild Rift ranked tiers?

If you’ve been playing the LoL on PC, then you’ll be familiar with the ranks or tiers on mobile. There’s the lowest tier, Iron, followed by Bronze and Silver. At the top, there’s Master, Grandmaster, and Challenger. One key difference in Wild Rift is a new mid-tier called Emerald.

How do I move up the Wild Rift ranks?

You won’t be able to get into ranked PVP games until you reach level 10. Reaching that level should be enough time to learn the mechanics and find a play style that suits you best.

At level 10, you can enter ranked matches as unranked. That means your first ten ranked games will be Placement Games that, depending on your performance, will determine your starting rank. During placement games, each win earns you 2 Ranked Marks, while losses incur no penalty.

These marks are needed to move up the divisions in each tier. As displayed in the table above, each tier from Iron to Emerald have four divisions each, with varying amount of marks needed to advance in each division.

When you earn the max marks in the highest division of your current tier, you’ll enter a Promotion Series for a chance to advance to the next tier. Two wins are needed to advance from Iron and Bronze, whereas three wins are needed to move past Silver and higher tiers. Should you fail in three matches in the Promotion Series, you’ll lose two marks.

You may be demoted to the next lower division or tier when you lose enough marks. In certain conditions, a temporary tier-loss protection helps you avoid tier demotion.

To help you ascend through the ranks faster, Wild Rift features Ranked Fortitude, another system of points you earn based on your conduct during matches. Actions such as maintaining your winning streaks and continuing the game regardless of an AFK teammate help you earn more fortitude when matches end.

Each tier from Iron to Emerald has a different Ranked Fortitude cap. By filling your fortitude bar at least 50% of the limit, you gain mark loss protection. That means losing a match won’t reduce your Ranked Marks, but your fortitude will be reduced by half the maximum. On the other hand, if the bar is full and you’re victorious in a match, you’ll earn two marks at the cost of draining your fortitude bar entirely.

Ranking up in Diamond and higher tiers work differently. Ranked marks and fortitude no longer apply. Instead, winning matches will earn you Victory Points, the amount of which will depend on your performance and other factors. Victory Points decay over time due to inactivity; play at least one ranked game a day to prevent decay.

The game will tell you what percentile of top players you belong to, and this will determine whether you’re placed in Master, Grandmaster, or Challenger tiers. An in-game leaderboard is regularly updated to display the players’ rankings in these top tiers.

Ranked games in Wild Rift use an S-draft format. Essentially, teams alternately pick champions to encourage fair and strategic picks among team members. In comparison, players in normal/unranked matches only need to choose and lock in a champion before another player does.

How does League of Legends Wild Rift ranked matchmaking work?

Up to the Emerald tier, players can form a party of two, three, or five and enter the ranked matchmaking queue as a group. During matchmaking, the game finds a different team with similar overall skill and power to pit against your team.

Restrictions exist in ranked matchmaking. For instance, parties of four players are restricted to unranked games. You can’t also play ranked as a party if the tier gap between members is more than one tier (e.g., an Emerald player in a party with a Gold player). Also, in Diamond and higher tiers, players can only queue solo.

Why should I bother with Wild Rift ranked games?

Knowing how they are a cut above the rest is what drives many people into climbing the ranks. To others, the rewards are the icing on the cake. Throughout and by the end of each Ranked season, players are rewarded with loot boxes, skins, banners, and other in-game goodies.

Will there be changes to the LOL mobile ranking system?

League of Legends: Wild Rift is still in beta phase, so you can expect the developers to introduce changes as they fine-tune the game based on community feedback and internal data.

One such future change is a ban system, which is not yet implemented because of the current champion pool being too small.