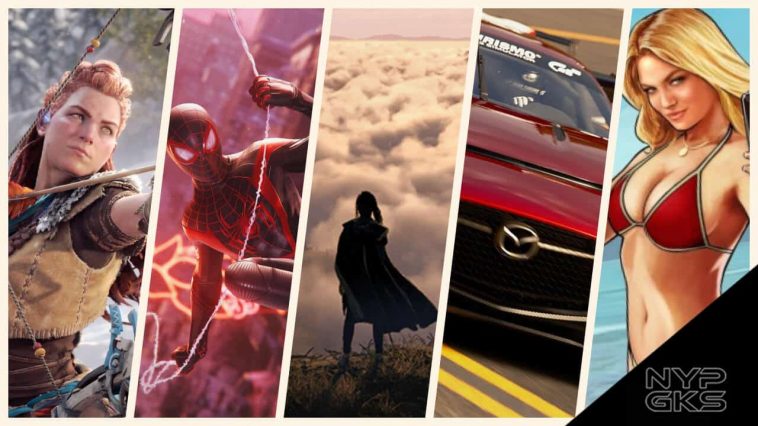 At long last, Sony have finally fully unveiled its next generation console, the PlayStation 5.

In its recent livestream event, Sony has made the much-awaited reveal of the PS5’s hardware and design. But this time, we want to focus on the part of the event that took a lot of time — the reveal of games coming to PlayStation 5.

There are plenty of titles that will take advantage of the next-gen console’s technology. There are 9 titles coming from PlayStation Studios, plus, games from third-party developers like Rockstar Games and Squere Enix, and indie makers.

Here, we have a list of games and their trailers. Let us know what you’re most excited for in the comments section!

This first PlayStation Studios title was developed by Guerilla Games. It’s a post-apocalyptic open world game that’s a sequel to the Horizon zero Down from 2017.

Did you love the PS4-exclusive Spider-Man game? Well, you’d also like this next one. Marvel’s Spider-Man: Miles Morales was created by Insomniac Games and Marvel for PlayStation Studios.

The PS5’s blazing-fast SSD will make fast-travel even faster and smoother. Plus, the new DualSense wireless controller and its adaptive triggers and haptic feedback will give a tactile feeling for every punches, web-swings, web shots, and more.

One of the most popular racing game series in the world is coming to the PS5 for its seventh installment. Created by Polyphony Digital for PS Studios, the GT7 will take advantage of the console’s 3D audio and haptic feedback for a more immersive feeling of being behind the wheel.

Here’s another one from PlayStation Studios and Insomniac Games. This intergalactic adventure game will further showcase the PlayStation 5’s celebrated ultra-fast SSD and DualSense controller.

Japan Studio and Bluepoint Games created this remake of a PlayStation classic for Playstation Studios.

Another one from Japan Studio. Preinstalled on the PlayStation 5, this game’s different gameplay showcases the console and controller’s new hardware and features.

Another PlayStation classic is also making its way to the PS5 to take advantage of the latest hardware. This solo-style game is also a great multiplayer title for playing with friends. Brought to you by Sumo Digital and PS Studios.

This game from Housemaque and Playstation Studios takes place in a hostile planet that changes every time you die — pretty hardcore. It features rogue-like gameplay to a third-person shooter.

Wreck cars and compete with friends by doing it? Seems like Lucid Games and Playstation Studios have come up with a ludicrous multiplayer party game right here.

Yup, the GTA V from seven years ago is coming to the PS5 with technical improvements, visual improvements, and performance upgrades. Rockstar Games will also release a standalone GTA Online version for PlayStation owners. It’ll arrive in 2021.

Other than GTA V, there are eight other titles from big third-party developers to initially come to the PlayStation 5. One of them is Ghostwire: Tokyo from Gameworks and Bethesda Softworks.

Releasing on 2021, Goshtwide:Tokyo is an action-adventure game set in a city full of spirits and mysterious otherworldly threats.

Project Athia (working title) by Luminous Productions and Square Enix is one of the biggest games to come to the PS5. It boasts an intricate and detailed world with impressive visuals and gameplay experience to will fully utilize the PS5’s latest hardware.

IO Interactive is concuding its Hitman trilogy with the third and final installment. Coming to both PS5 and PS4 in January 2021.

NBA 2K’s 2021 installment was built from the ground-up for the PlayStation 5. Arriving in the fall of 2020.

Arkane Studios and Bethesda Softworks’ new first-person game is made for the next-gen consoles.

Ethan embarks to a new journey in search for answers within sketchy buildings and snowy trees in Capcom’s eight installment of the Resident Evil series.

During the PS5 reveal event, Capcom also gave us a first look at its bizarre new game. It’s quite hard to explain so just watch it for yourself.

This next one is from the indie developer Young Horses. It’s a narrative-driven, whimsical adventure game with an island full of mystery and half-bug, half-snack creatures.

No, it’s not a Netflix animated show. Instead of stunning and impressive visuals, this game leans in narrative and covers love, friendship, and self-realization in the last days of humanity.

Indie developers Superbrothers and Pinescented created this dramatic interstellar journey to a mythic oceanic planet. Just like most indie games, this game focuses on narrative and storytelling to hit the emotions of the players.

Ember Lab brings another story-driven indie action game on the PlayStation 5 with its fast-paced combat and exploration qualities.

This game from indie developer Neostream Interactive lets you do missions to get evidence and findings for a mysterious professor. The catch, it’s set in a Victorian-like era.

The popular video game franchise is coming to the PS5 with new gameplay mechanics, larger scope and scale, and new items.

Giant Squid and Annapurna’s indie game follows the life of an archer and an eagle as they venture to a mystical island to dispel the curse of darkness.

As the name suggest, this game from BlueTwelve Studio and Annapurna follows the life of a cat in a futuristic walled city.

Well, that’s all of it. We’ll update this article once more games are announced. Are there other games you expect to see on the PlayStation 5? Let us know in the comments below.