One of the downsides to using phablets is that its using it as an actual phone tends to become unwieldy at times. This is especially true with my current daily driver, the Sony Xperia Z Ultra. Not only that, but using it in public is a thief magnet. And that last one is more important since because almost every phone is affected by this.

Not too long ago, my wife had her bag slashed when she was seen using her phone while in a public transport (nothing was taken, thankfully). That’s why when I read about Cherry Mobile’s P1 remote phone, I was psyched! This could be an answer to all my problems! It’s a standalone, single SIM phone, but it can act as a remote dialler and remote messenger when paired to another phone via BlueTooth. And at PHP 799.00, it’s a steal if everything goes well! So, I bought one. So, did it live up to its expectations?

Like the phone, the box is colorful, with generous amounts of pastel. There’s nothing extraordinary with the packaging, and that’s ok. So is true with the accessories. You get nothing else but a charger. Instead of a data cable with a separate wall socket, the charger’s an integrated one. But, I’m still thankful that it uses a microUSB port as a charging port! I’ve used the chargers of my other devices, and they all work with this phone. 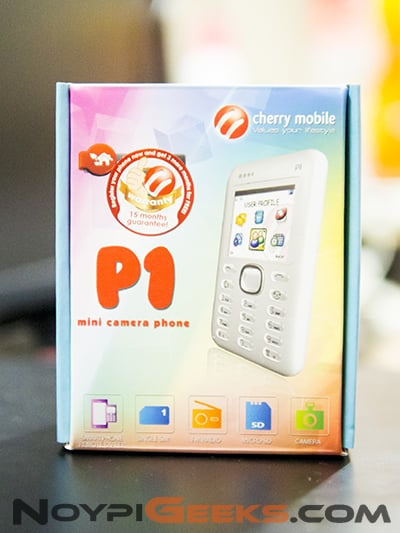 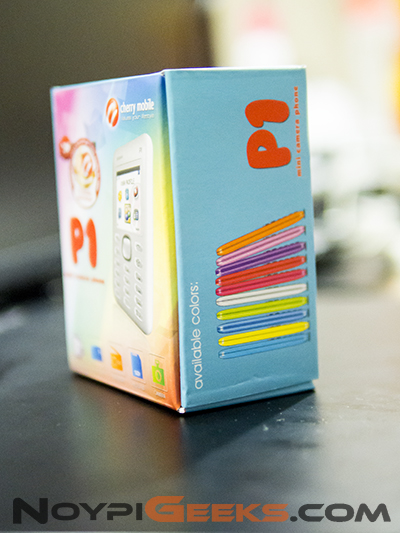 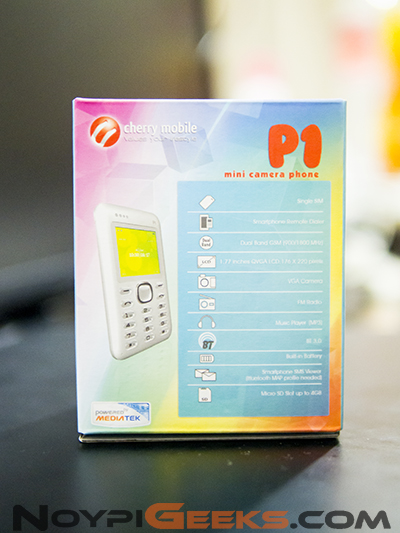 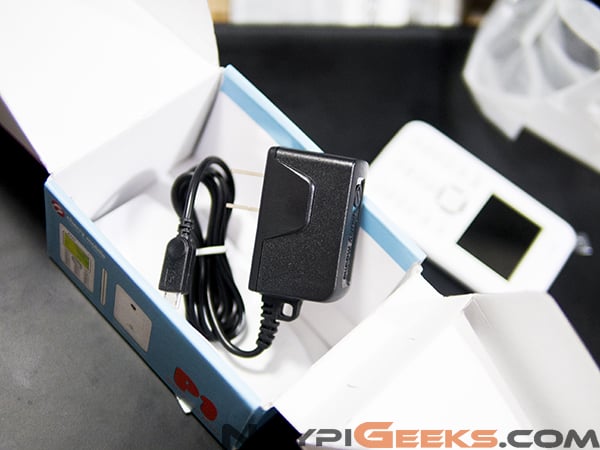 The Cherry Mobile P1 Mini is blatantly cheaply built, and I LOVE it! The plastic outer shell is cheap to look at and cheap on the hands! The screen is hell bent to gouge your eyes out, and ditto for the hardware keyboard. If you’ve seen or handled those phones that are being sold in bangketas everywhere, then you’ll get the picture. And it fits so well! I love that fact that it looks that way. Think about it, this is what you’ll be fishing out of your pocket instead of your higher-priced phones. If it had a premium feel to it, just like the remote dialer of HTC’s Butterfly, the HTC Mini, then it would’ve been a thief magnet as well. 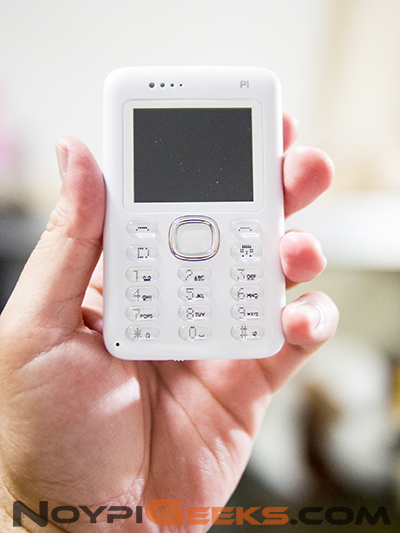 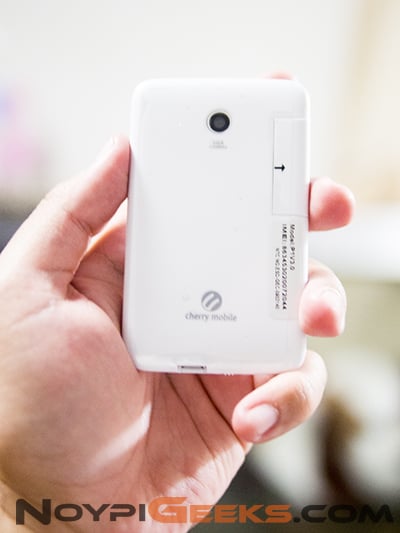 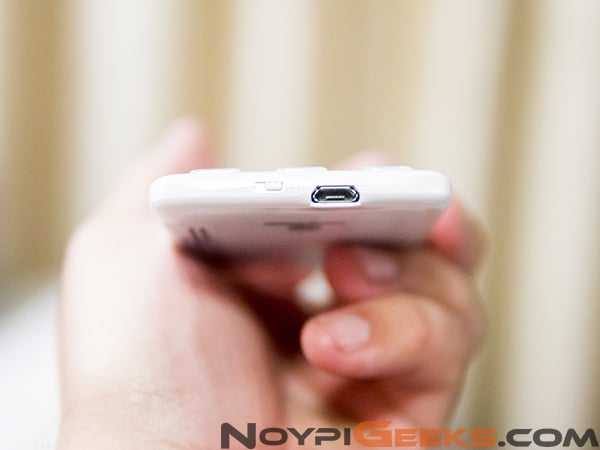 The phone has a very simple design. the front has the screen and the physical keyboard. Its battery is non-removable, though the back does have the SIM tray and (surprise! surprise!) a VGA camera, that I’m sure no one in their right mind would use. The bottom has the microUSB slot and, interestingly, an on/off switch. There’s also an on/off button in the keyboard, but this physical switch turns off the phone completely, or something to that effect.

I’m skipping over the other parts of the usual review structure and skip over to this section. For all intents and purposes, this is a standard budget feature phone, with the exception of Bluetooth connectivity. It takes regular-sized SIMs and can be used as a standalone phone. In that capacity, it works like a charm. I had no problems making calls or sending text messages. The physical keyboard took some getting used to, since I’ve been using QWERTYs for quite a while, but it was good after a while. I stuck with just words and no smileys and minimal symbols. Overall, no complaints here. It uses a feature phone OS, as opposed to using Android, which is ok since its internals are very modest. 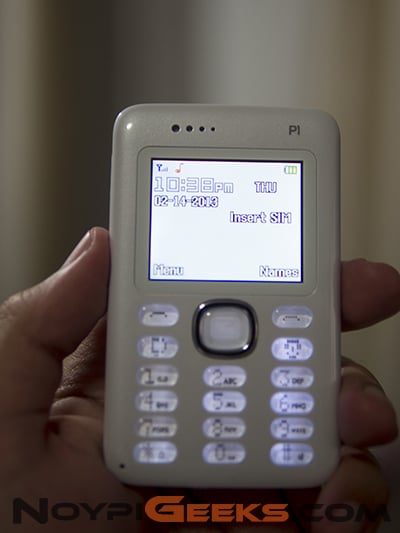 But when I tried to use it as intended (as a remote dialer AND messenger), then that’s when things went a bit south. You can use the phone without a SIM card, and in that capacity, it becomes a remote. Connecting the phone to my higher end devices went well without a hitch.

Once connected, it’s able to access you main phone’s contacts. On the Cherry Mobile P1 Mini’s phone dialer, you can choose between contacts stored on the phone, SIM, or Bluetooth device. And that part actually works well. And, yes, being true as a remote dialer, you can see your main phone dialing the number. Ditto when answering calls. You’ll see it on your main phone, and then on the P1 where you can answer it. You can even hear the conversation on your main phone. And that’s part of the problem. Even your main phone’s microphone is still functional, and scuffs and such are picked up. The person on the other line can even hear my voice twice at times (with noticeable lag, in what might seem like a time-looped version of me was also talking). Worse, the audio you pick up is a bit on the soft side, so it’s a bit difficult to hear. In any case, conversation over this phone will not be a pleasant experience. 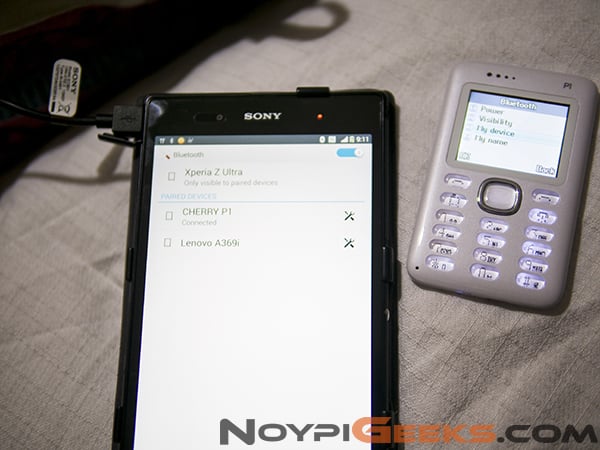 But what really irked me is that the remote messenger didn’t work at all! I tried sending a message, but without a SIM, I could only save the messages as draft. It didn’t work on any of the phones I connected it to, not even on Cherry Mobile phones. I looked around and found that it uses Bluetooth Message Access Profile (BT MAP) for the messages. For iOS, that support came in iOS6. For Android, it’s on KitKat, which means I’m $#!t out of luck for the time being. I’ll have to wait for the Z Ultra KitKat update for me to be able to use the messaging part.

The fact that I’m unable to use the remote messaging part is a bit of a downer, but I can live with it. I just need to wait for my phone to be updated to Android 4.4 KitKat. But for those who are already on the latest Android version, then this would be a good buy. Despite the misgivings this phone has, I’d still recommend it. I’d also use this over BT headsets. For one thing, good BT headsets, especially those that can remote dial, cost a whole lot more. And another, when people see you using one, then you could still become a target for snatching and such.

There’s a certain secure feeling when all they see you use is a cheap phone that looks like you just bought it on the streets. And with a SIM tray, it can actually double as an emergency phone. Just slap in a regular SIM in there, and you’re good to go! In fact, I even recommended it to a friend who went to another country for business and needed a dumbphone for pure calls and texts. That way, he has a cheap phone that he can use as intended, and then find some other use for it once he gets back.