The unveiling and availability of the much-awaited Nexus 5 also heralds the arrival of the new version of Android, version 4.4, a.k.a. KitKat.

As with other new releases of the OS versions, it will first be available for the new Nexus for a while until other OEMs can get their act together and release an OS update for their top tier phones. While we’re waiting for that to happen, here’s what we’re supposed to expect from KitKat.

All versions of Android comes with a defining/significant update or new feature/s aside from the other updates. FroYo came with native microSD app installation support, Gingerbread with native SIP telephony and NFC support, Honeycomb with tablet optimization support, ICS with Holo UI, and Jellybean with the superb Project Butter.

For Android 4.4 KitKat, it’s Project Svelte. Simply put, it enables KitKat to run smoothly on devices with as little as 512MB of system memory (RAM). While this makes fragmentation one step closer to being addressed, it doesn’t mean that all older devices would automatically become KitKat compatible. RAM isn’t the only minimum requirement, after all.

But it’s a boon for budget phones, promising a much smoother experience. Given that we’re getting a smooth experience from some budget phones with Jellybean, we’re eagerly awaiting excellent experience from KitKat. I hope our local brands are hard at work in bringing their current slew of budget phones to Android 4.4 KitKat although it’s very unlikely that these devices will get an upgrade.

Of course, Project Svelte is only part of the story. The new version also has a slew of other notable enhancements. One of the bigger changes the way SMS is handled. The gist of it is this: only one app (whatever app you set as the default app) will have God Mode as far as SMS manipulation is concerned. For the majority of the apps and users, it wouldn’t be much of a problem.

The ones that would take a hit the most would be supplemental apps like MightyText (that lets you send SMS via your PC), and a minor inconvenience when restoring SMS via third-party apps (you have to set that app as the default SMS first to be able to restore your messages and then reset your preferred SMS app to default again). 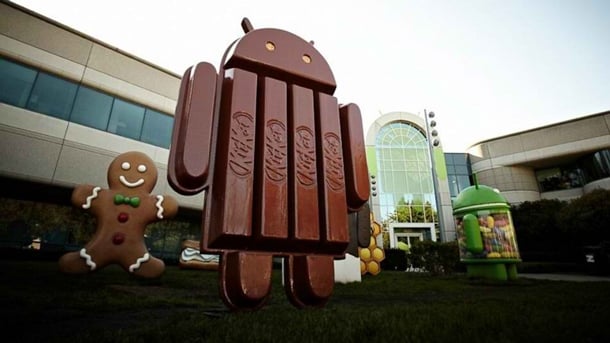 Speaking of default SMS applications, KitKat also came with a new version of Hangouts that lets you integrate Hangouts messages and SMS messages into one app, i.e. Hangouts v2 is now your default SMS app. So, there’re no longer two separate Hangouts and Messaging apps. One app to rule them all. Along with this change also comes native Emoji support.

One notable new feature that I hope will get incorporated in other Android OEM Skins (which I doubt, especially if you’re using a Samsung phone) is the Always On mode of Google Now. We’ve seen this feature in Moto X, wherein you can simply say “Ok, Google” to activate voice commands from the home screen (or compatible apps, I would assume). So that means you no longer need to go to the Google Now interface and click on the voice button.

Other notables are a new immersive full-screen mode, better multitasking, a smart contact list, and more. Actually, there’s really a lot of good features in the list, both for consumers and developers. Hit up the source link to read up on them all. I have to warn you, though, it’ll whet your appetite for an insane serving of KitKat if you do.