Starmobile has taken the wraps off of its latest smartphone. Jam-packed with the latest touch features, the new, intuitive Starmobile Turbo is a 5-inch smartphone running on Android 4.4 KitKat for Php6,990.

Just like with the smartphones Up and Sky, the Starmobile Turbo features several of the company’s smart gestures. For one, there’s the double-tap gesture to the screen to unlock/lock the phone. For another, you can use 2 or 3 fingers to perform gestures for specific commands. You can even draw patterns to launch apps.

Further software treats found in the Starmobile Turbo include call and text filtering to prevent unwanted communication from reaching you, a battery saving feature that limits background activity and data connection, and smart camera controls to take shots by using taps or voice. There are also wireless printing, app-to-SD transfer, and USB On-the-Go (OTG) support. 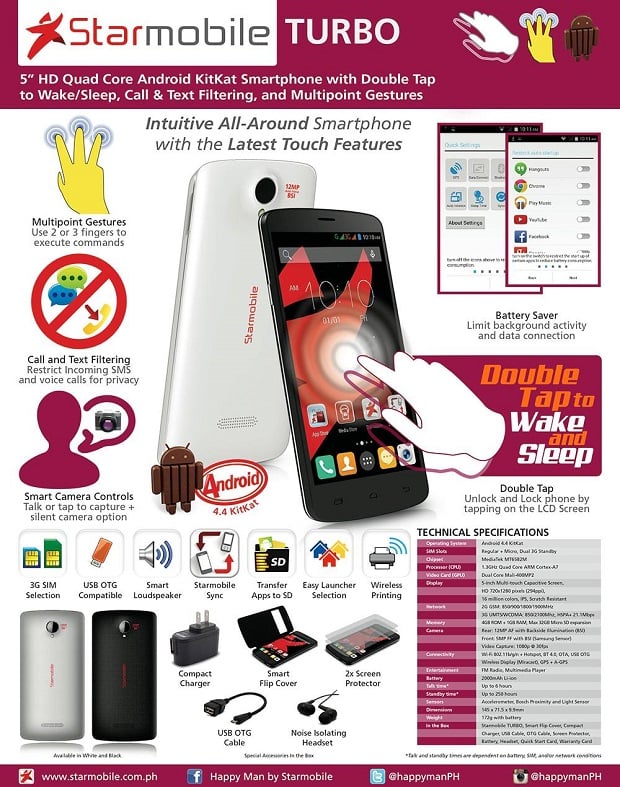 For its price, the Starmobile Turbo sports a decent set of hardware. With a quad-core MediaTek chip inside, this handset comes with a 5-inch multi-touch capacitive screen with a 720p HD resolution, scratch resistance, and IPS technology for wide-angle viewing. Dual SIM capable (with both SIM slots supporting 3G HSPA+ connectivity), the Turbo further employs Mali 400 graphics, Wireless Display screencasting, 4GB internal storage, and 1GB of RAM. For the photo aficionados, there’s a 12-megapixel, back-illuminated rear camera (capable of 1080p video recording) along with a 5-megapixel shooter (powered by a Samsung sensor) in front.

Available in white and black color variants, the Starmobile Turbo is now selling for only Php6,990. Bundled in the box are all sorts of useful accessories, including a USB OTG cable, compact charger, a smart flip cover, a couple of screen protectors, and a noise-isolating headset.