Surge pricing this holiday season is too damn high.

If you’ve taken an Uber or Grab in the last two weeks, chances are, you’ve noticed the significant increase in surge rates. Pricing has risen ten fold compared to previous rates.

Good thing the Land Transportation Franchising and Regulatory Board are not yet in the holiday blues as they issued a warning to both Grab and Uber. Transport Network Vehicle Service (TNVS) usage has grown tremendously for the past two years and it already became the primary means of transportation for some because of its ease of use and comfortability. 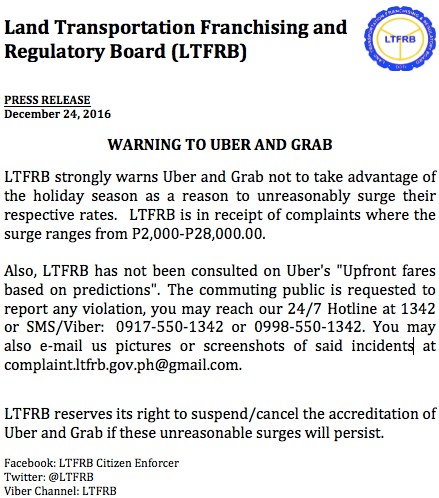 According to LTFRB, they’ve received several complaints about surge pricing citing rates of Php2,000 up to Php28,000 for one (1) ride. Well, I don’t know about you but I’m certainly not paying that much for a 10 to 20km ride. Some riders also report an increase of almost twice the fare they’re usually paying even though it’s the same place and time as before.

I’ve personally experienced the increase in surge pricing last week. The service wants me to pay almost Php1,000 for less than 5km ride from Makati to SM Mall of Asia. It was almost 12am when I was trying to book, so that’s definitely not due to the rush hour.