Well, actually, it’s one of those “rumors” that you know is true and you only need to hear it from the horse’s mouth to confirm. Well, the horse has neighed and kept on neighing a few more. Nokia Lumia 2520 is now official.

At the Nokia World held in Abu Dhabi at 3PM today, Nokia announced six new devices: three Asha phones, Lumia 1320, Lumia 1520 and this new tablet. This one certainly gets the limelight, being that it’s the first tablet from Nokia that’s being rumored for longer than I can remember. We posted about a rendered leak of Nokia Lumia 2520 not too long ago. And now it’s confirmed that the leak is accurate! Elop himself introduced the device, and the one he was holding was the red version. Don’t worry, it’ll still come in cyan, as well as in shiny white and matte black. It’s also been officially spec’d: 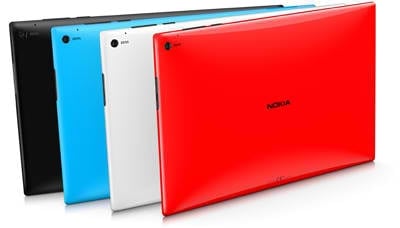 They’ve vaunted much about the screen as well, promising it to be brighter when needed, low reflectance, and a 180° viewing angle. Yes, you read that right.

Unfortunately, there’s still no word on pricing and availability of the Nokia Lumia 2520 yet. We’ll keep our eyes peeled on this. It’s no secret that Windows RT had a very abysmal reception. But given the specs and design of this gorgeous tablet, I’m hoping the platform gets a fighting chance. I just hope that Nokia doesn’t go overboard in the price, like they did on the Nokia Lumia 1020.